What Batik is made of 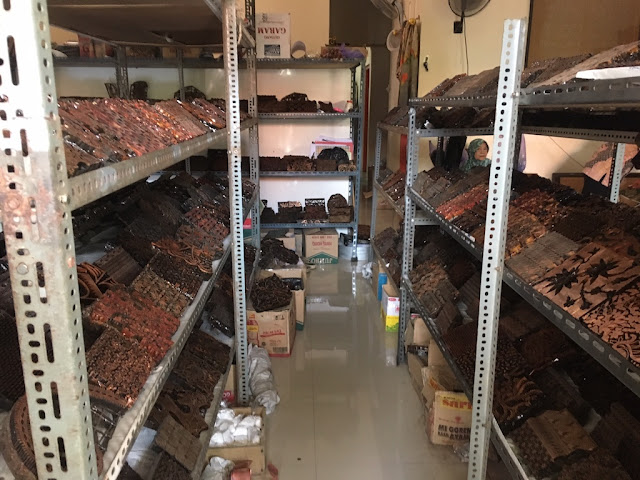 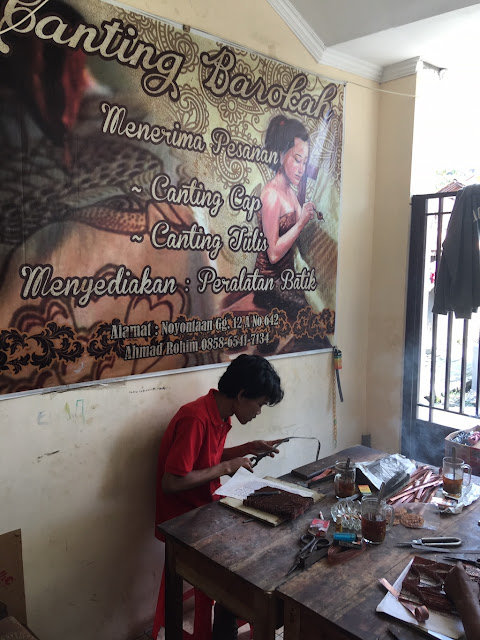 After the big Hari Batik celebration, I spend Thursday 3 October collecting materials for a new temporary work. Last time, in 2016, I made a temporary carpet from materials used as natural dyes for Batik. Mas Dewa asked me to make one again. I suggested to make it from natural & synthetic dyes address this subject. 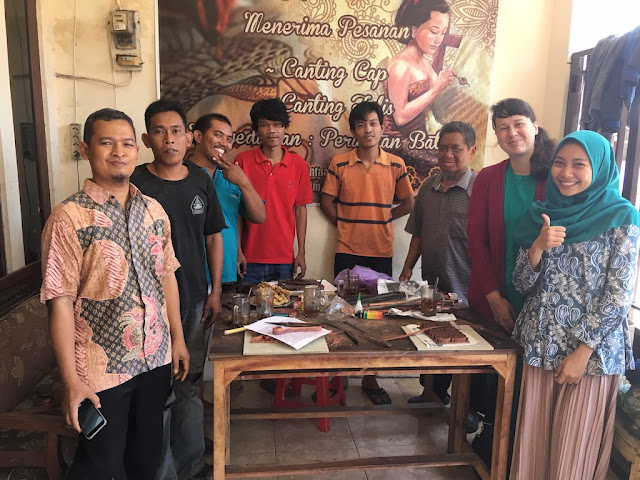 We first went to visit a Canting & Cap maker who invited me the day before. I was wearing my canting earrings and he said, “These are not Pekalongan canting, I have them and even smaller then yours”. Of course I needed to see them! The small shop Amat Rochim Barokah is filled with rows of Caps, the copper stamps used to make Batik Cap. In front is a little porch were the caps are being made. Mas Mustakim welcomed us with much pride. He explained he took over the shop of his parents and that he is the third generations selling Cap & Canting. He was so happy I came and also surprised, but for me this was the first time I could actually go to a Canting & Cap maker, so happy he invited me He showed us many things, the work he prepared for the Batik Week exhibition & many kinds of canting. I bought a selection with different sprouts, I hope to use them when I am back home. He also showed the tiny canting, they are so cute!! And he gave them to me as a present! So sweet, I can’t wait to turn them into earrings. I also bought 3 copper bowl for melting the wax. Normally they made from other metals and these looked so pretty. Perfect for displaying the natural dyes during the making of my temporary work.Last but not least, I asked if he could make a Cap after a design. He explained that a small Cap takes about two weeks to make. The special order is currently in the making! Can’t wait to see the final result.
  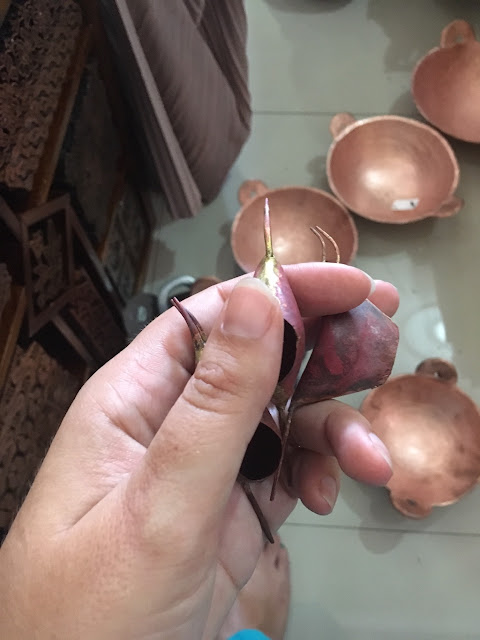 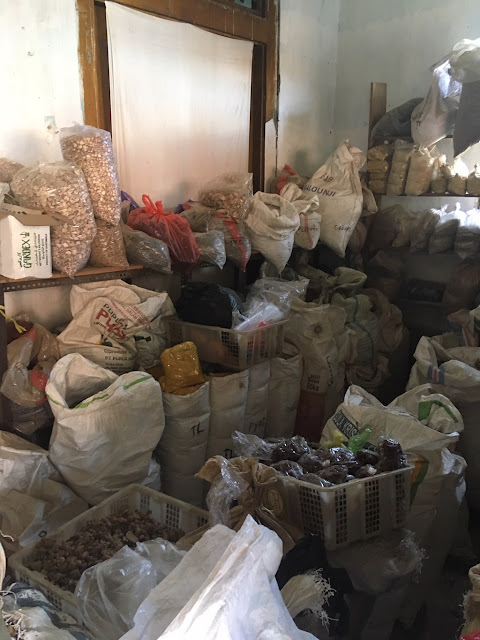 Store for Natural dyes
Next stop on Thursday was getting natural dyes. I was accompanied by Mas Lani and Miss Lutfi. Mas Lani knows all the spots when it comes to making Batik. The store was from the street till inside filled with bags, big and small, with materials for natural dye, traditional medicine and tea. Within minutes they had all the things I was looking for. The Indigo they only had as a paste. They only sell it per kilo and I didn’t want to waste it. But good to know this is easily available here. 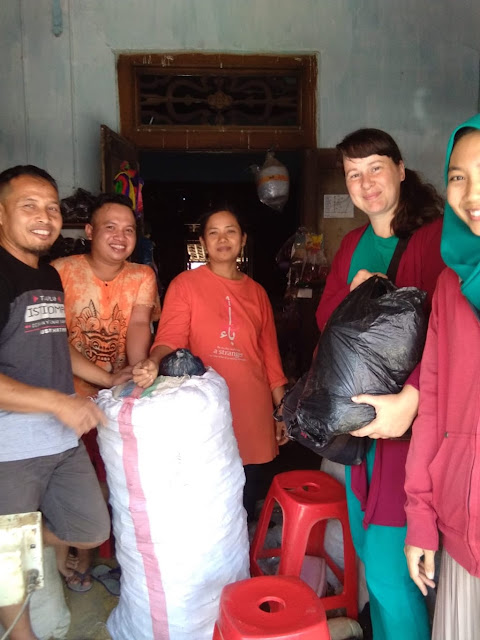 Groupphoto at store for natural dye 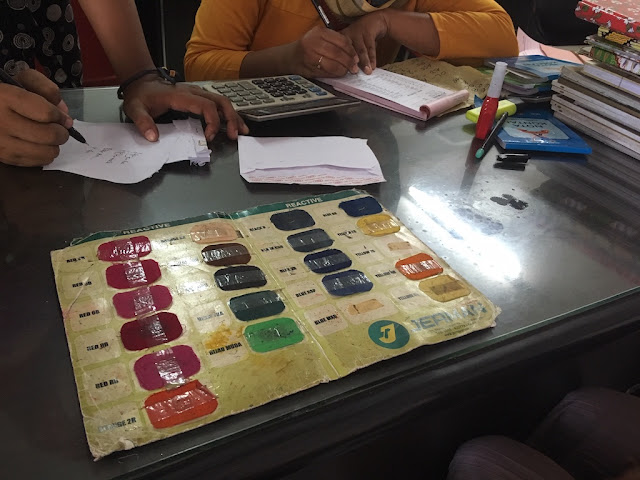 Selecting dyes at Jerman
We continued to Jerman. I first laughed at the name; it was from Germany the first synthetic dyes were introduced on the Indonesian market in the 19th century. So the name Jerman for a synthetic dye store is very appropriate. After Miss Lutfi explained my plan, they discussed for several minutes; was the rice not eaten, was it laying lose on the table, and more of these questions. It made me worry about how dangerous this ‘warna’ actually is. They took forever to return with four bags of dye; blue, yellow and two types of green. The yellow was orange and the greens very similar. So we asked to switch one of the greens for red. Waiting several more minutes, we got the red and I also bought a pair of professional bright orange gloves. After lunch under a beautiful tree, we went for the last materials, rice & turmeric. The rice on the pasar and the turmeric at a special spice store. With full bags I returned to the Museum. I bought much more then needed for the work, but figured all that is left will be well used at the museum.
  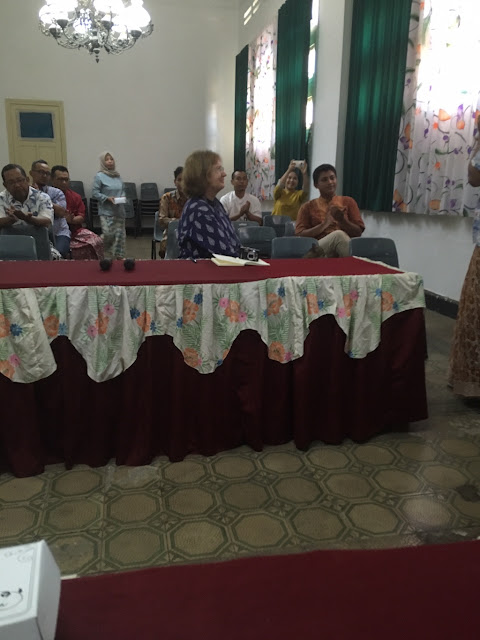 On Friday 4 October was time to give a talk at Museum Batik. As part of a panel we discussed European, Chinese and Indian influence on Javanese Batik. I was honored that Dr. Maria Wronska-Friend was there for it and Kucing Frederica, the museum cat, sat next to her front row. So funny, only in Indonesia I guess. My talk went well and in the days following I had nice conversations about my research. Many agreed how the history and current Pekalongan Batik is of much importance in this research. I hope I can continue these conversations and visit in the near future all of the batikworkshops of everyone I met. 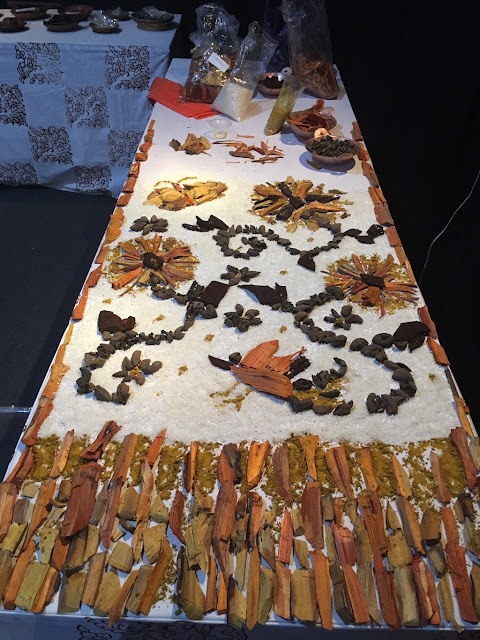 Making of ‘Natural dye vs. Synthetic dye’ at the Museum Batik booth at Batik Week
In evening I made my ‘Natural dye vs. Synthetic dye’ work. The work really turned into a performance. It was so busy and so warm. I made the natural dye part pretty fast and after a short break I put the gloves on and started the other half. The big orange gloves are of thick rubber and reached to my elbows. I was sweating so much, crowded with people filming and making photos. I think it was pretty clear the natural dye was much nicer to work with then the synthetic dyes. When I removed the gloves my hands were bright red and blue spots covered my arms. I rushed to wash them, but after several attempts my fingers were still red. It took a few more days and my nails still has some traces of it...Imagine working with this daily...
  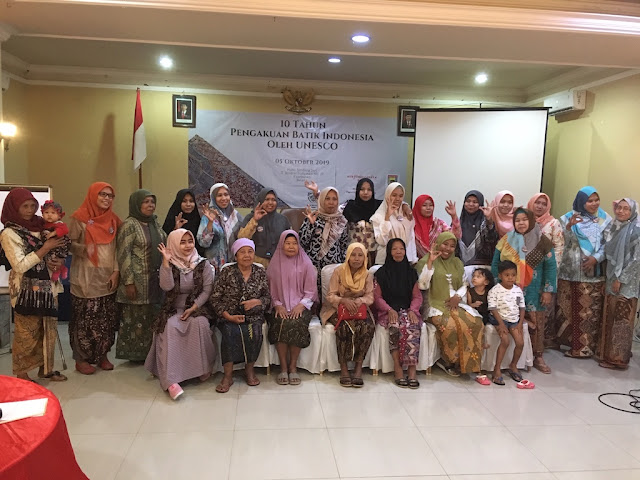 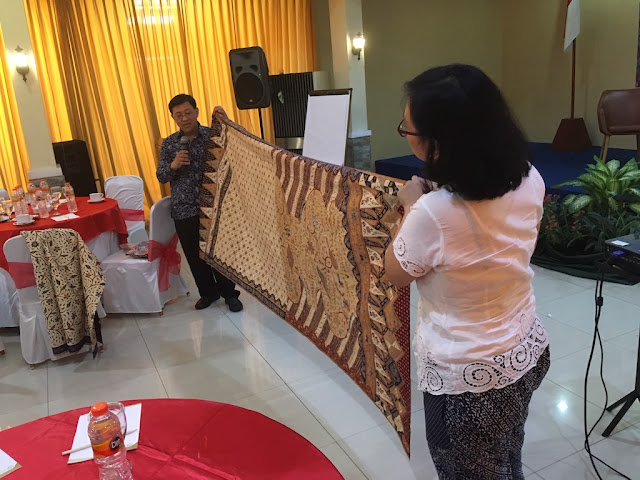 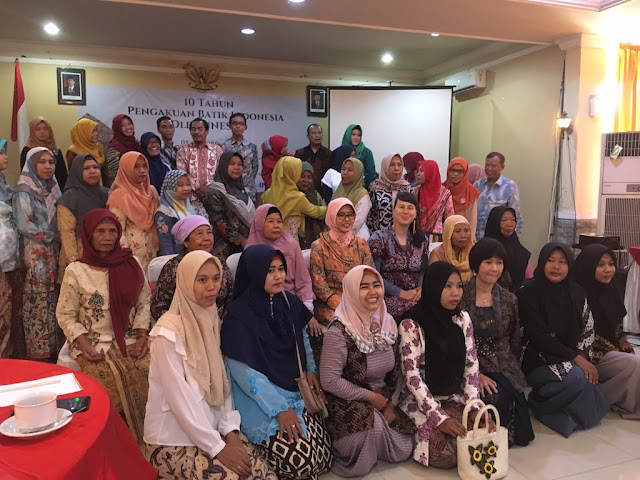 Groupphoto with everyone
Saturday it was time to launch my project in Batang. Pak William Kwan of IPI and Miss Miriam and Miss Tika of Redaya Batik organized a 10 years celebration of Batik as Unesco Heritage from the Batang Batikmakers. It was so great seeing the makers I met in 2016 and it was extra great two of my movie-stars, Ibu Rasminah and Miss Nurul, were there. My film was first on the program and to my surprise it was so quiet. It was the first time I really could return the film to the makers. And it was so great to it was looked at with so much attention. My film doesn’t show them something new, I try to show daily life of Batikmakers in it & they got that right away from the feedback I got.
  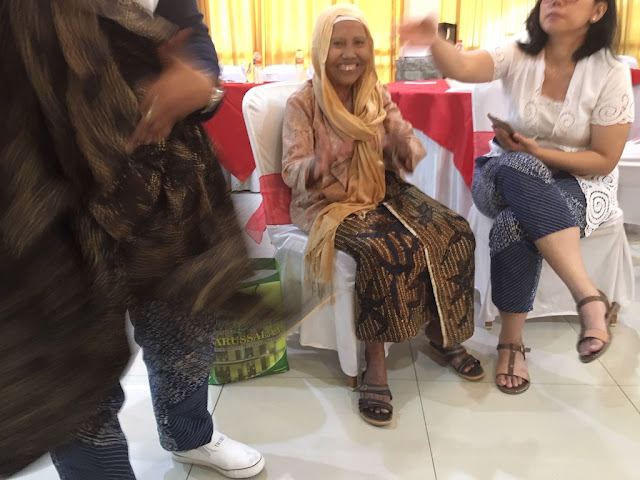 The always smiling Ibu Rasminah, also in my film 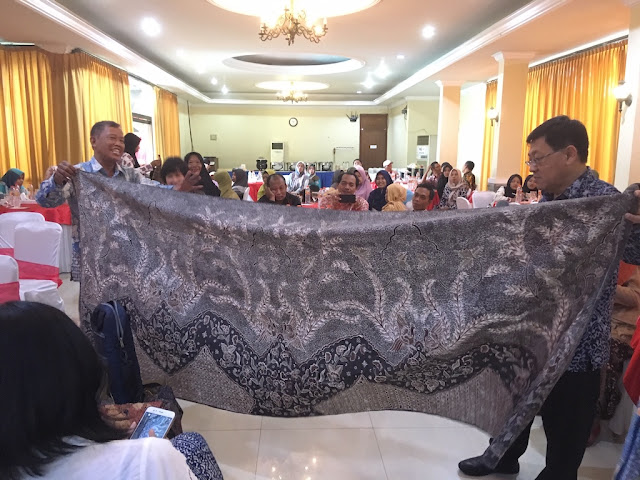 Presenting Batiks from the audience
After a coffee-break Pak William gave a presentation on Batik designs found in the Batang region. It was my turned after him. I gave the same presentation as in Jakarta & Pekalongan, but most of my audience was now Batikmaker, not collector, researcher, fan or teacher. So I choose to emphasize on the Javanese batikmaker part of the story, of this re-telling. The reaction to the fact that all makers of Indo-European workshops are Javanese batikmakers was strong and they found it so great that this story is their story. A question from the audience was how many Indo-European batik entrepreneurs there actually were. I think it is about 30 or more and I am still finding new signatures. I explained still much need to be figured out about these ladies. There are here now considered as ‘Dutch’ or ‘European’, and seen as outsiders; but these ladies were either of mixed descent or married with a Dutch or European man, so they would have had a mother who taught them about Batik and other parts from Javanese culture. So this Indo-European influenced that is now seen as something very far removed from Indonesian culture, is less separate as is thought {and sometimes wished to be}. For me this re-telling is a way of addressing this shared history, but also showing that the focus is now maybe too much on the European part of it and not on the very important contribution of Javanese batikmakers who actually made all these Batiks we admire in collections worldwide. They are the ones still making this patterns today, carrying on this history within textiles and they are the ones we should return this heritage to. 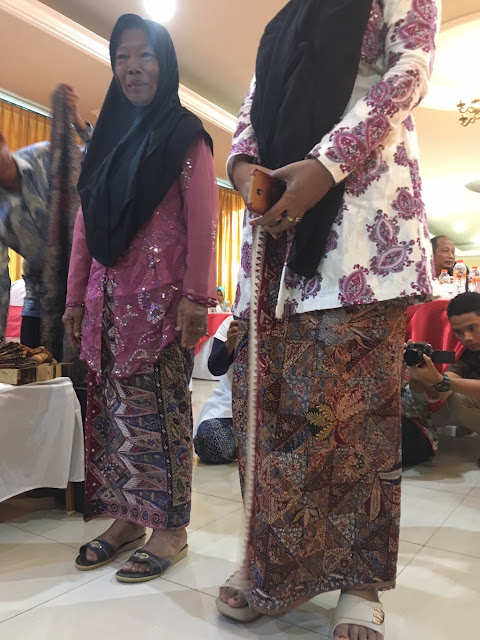 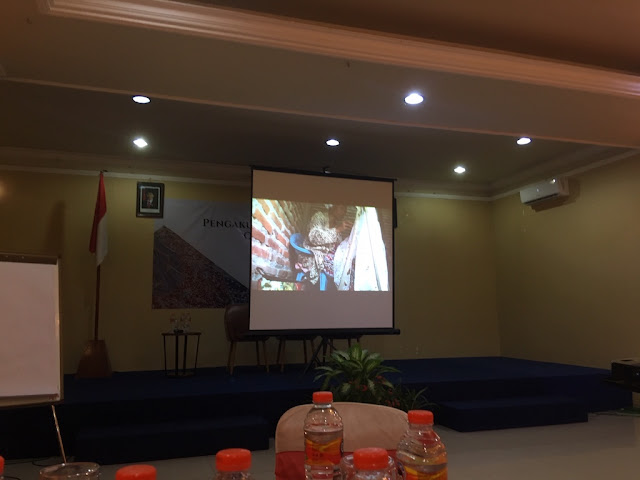