When I saw Maria Carp's Batiks (see blogpost 'Give honor to whom it’s due') I noticed these strangely boot-shaped baskets. I recognized it from Batiks by Eliza van Zuylen, but I thought it was just a different shaped decorative French wine basket. There is one basket with a handle which is used a lot on Batik Belanda. Somehow I knew this one had to mean more. 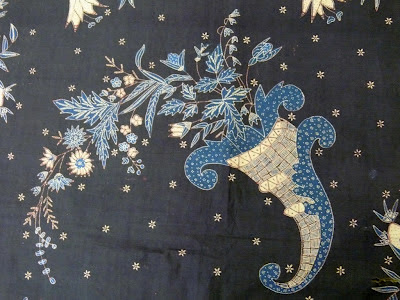 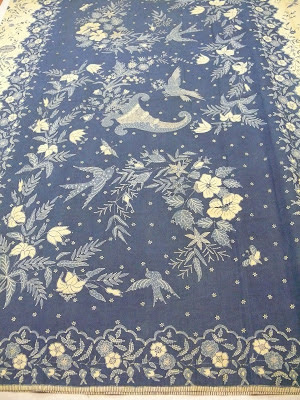 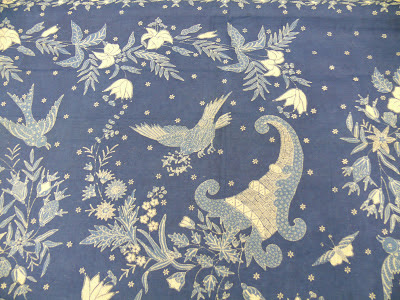 "The cornucopia (in Latin also cornu copiae) or horn of plenty is a symbol of abundance and nourishment, commonly a large horn-shaped container overflowing with produce, flowers, nuts, other edibles, or wealth in some form. Originating in classical antiquity, it has continued as a symbol in Western art, and in North America is particularly associated with the Thanksgiving holiday.
...The cornucopia became the attribute of several Greek and Roman deities, particularly those associated with the harvest, prosperity, or spiritual abundance, such as personifications of Earth (Gaia or Terra); the nymph Maia; and Fortuna, the goddess of luck, who had the power to grant prosperity."
-From Wikipedia

How can I not recognize this symbol, why doesn't it mean anything to me? I must have learned the meaning somewhere along the line?
It's no suprise this symbol was very popular in Batik Belanda. Frankly I'm a bit disappointed about that, colonist ordering Batiks with symbols to show off their luxurious lifestyles or to ask or wish for more. It's like Gwen Stefani singing:"Cha-ching cha-ching we're loaded and we're not gonna blow it"' (or 'If I was a rich girl', but the song is from a musical so I can condone). 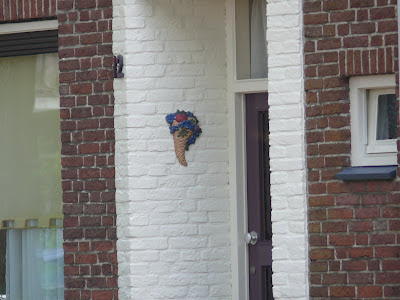 Once you're aware of the meaning of a symbol, you see it everywhere. In snack-bars, on houses, in a lot of Batik Belanda's and even in a Frida Kahlo painting.
She is throwing up her 'horn of plenty' which is more a horn of all the bad stuff that she found on her way. 'Without Hope' is made in 1945. She had just recovered from a surgery, when a doctor told her she could eat everything again. She was so skinny the doctors fed her mashed food every two hours. On the back of the painting she wrote a rhyme: "A mí no me queda ya ni la menor esperanza...Todo se mueve al compác de lo que encierra la panza". ("I do not have any hope... In my belly everything keeps moving on/the whole time"). The author Hayden Herrera of the biography 'Frida' thinks she got the idea for the painting when she threw up in bed over her easel. She paints herself crying, the horn filled with a pig, a chicken, brain, a turkey, a sausage, a fish and a sugar skull with the name 'Frida' written on it. 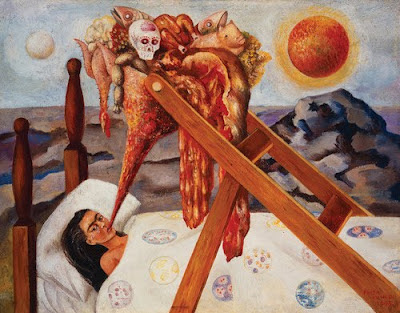 'Without Hope' by Frida Kahlo

This use of the symbol 'horn of plenty' feels more suiting, but maybe the symbol can also be interpreted as 'you reap what you sow'. Symbols can gain or lose meaning, change or adapt in time, carrying out new messages, but they will always tell something about the period in which they where used most.