Lichens & birds made out of fabric

In August I visited the Textiel Museum & De Pont in Tilburg with Susan van Uden. In the Textiel Museum they had two exhibitions, Lilies and thistles (till 6 november) & The Making Of, Projects From The TextielLab. In the blogpost Water lilies & table linen you can find photo's of the exhibition Lilies and thistles. Unfortunately it wasn't allowed to make pictures in the exhibition The Making Of, Projects From The TextielLab. But there where some nice works in progress on display in the TextielLab, enjoy! 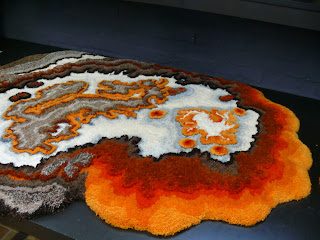 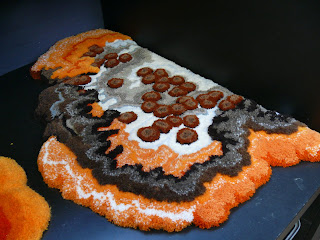 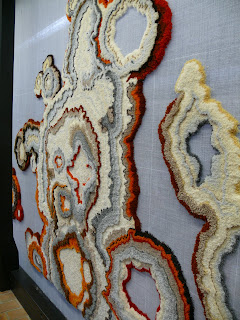 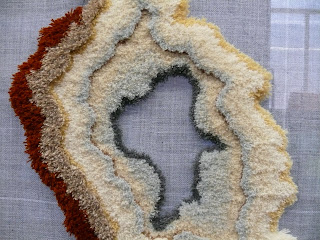 These must-have carpets are made by Lizan Freijsen. This work is based on lichen.

"Lichens are composite organisms consisting of a symbiotic organism composed of a fungus with a photosynthetic partner, usually either a green alga or cyanobacterium. The morphology, physiology and biochemistry of lichens are very different from those of the isolated fungus and alga in culture. Lichens occur in some of the most extreme environments on Earth—arctic tundra, hot deserts, rocky coasts, and toxic slag heaps. However, they are also abundant as epiphytes on leaves and branches in rain forests and temperate woodland, on bare rock, including walls and gravestones, and on exposed soil surfaces in otherwise mesic habitats. Lichens are widespread and may be long-lived; however, many are also vulnerable to environmental disturbance, and may be useful to scientists in assessing the effects of air pollution, ozone depletion, and metal contamination. Lichens have also been used in making dyes and perfumes, as well as in traditional medicines."
From Wikipedia

The texture of the tufted carpet is so close to the real, but of course much smaller, lichen. Tufting is a type of textile weaving in which a thread is inserted on a primary base. I would love to do a project with tufting. It's such a beautiful technique. The TextielLab has the knowhow & equipment for it, hope to do a project there one day.. 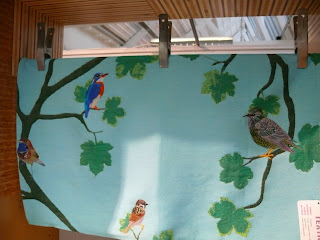 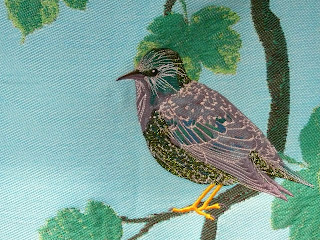 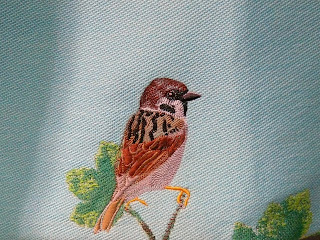 Designer Arjan van Arendonk uses the fabric as a base for his paintings. Working over it with thick layerd materials, leaving bits open, showing the birds or other parts of the fabric. I already like the fabric as it is.