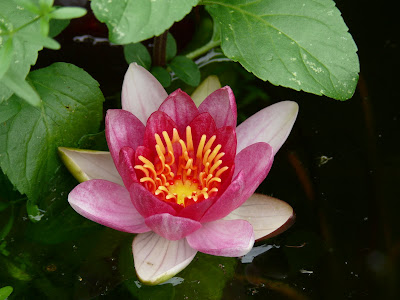 Water lily in my pond

Running terribly behind with al my blogposts. I'm visiting a lot of exhibitions, getting inspired by new things I see & read every day. Every blogpost turns into a little project. I'm still looking up information about this flower carpet they make in Asselt (nearby Roermond). I found a old blackandwhite photo in a book. Apparently during the Procession, the priest walked over the flowers towards the church...Does it ring a bell?
The Gods Walk on rice in Selat on Bali...How remarkable is it that two traditions involve a temporary material (rice & flowers) which they make a carpet of and then the priest walks over it...two total different parts of the world. Apparently they also have a similar kind of tradition in Brazil with salt. So a lot to discover about this subject & I have a new idea for a work with this theme/tradition, soooo I will keep you posted. (And already some about it in this post!)
Yesterday I interviewed the assistant curator of the Museum Nusantara in Delft. Great interview and also a suprize closet full of Batiks! My mother is going to translate it for me, so soon an interview in perfect English here on De reis naar Batik.
Also I continued my quest for Delftware in Delft without visiting the standard tourist places. Which is quite a challenge. So that one is on the to-do-list as well (see blogpost A quest in Delft II) .
Last but not least I visited the Miffy in fashion exhibition & the Museum of contemporary Aboriginal Art in Utrecht. The last one really gave me a lot of ideas, MORE?! Yes even more. And seeing this short film by Lucas Grogan, I know I have to explore some Australian territory.

But before I do all of the above, Water lilies & table linen. In August I visited the Textiel Museum & De Pont in Tilburg with Susan van Uden. In the Textiel Museum they had two exhibitions, Lilies and thistles (till 6 november) & The Making Of, Projects From The TextielLab (see blogpost "Lichens & birds made out of fabric)". In this post I focus on the lilies, the TextielLab projects I save for later. 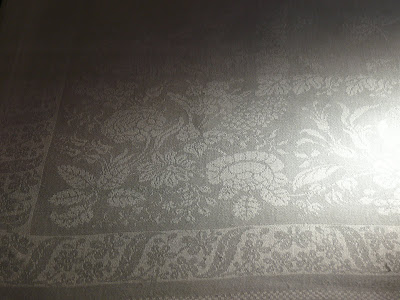 "An exhibition with a central role for floral motifs in table damask.
Roses, carnations, lilies, thistles and violets have been a favorite motif on table damask for centuries. The way they are displayed varies over time and frequently follows prevailing art styles.

The exhibition shows damask table linen as well as designs, samples and pattern books from the last quarter of the 19th century, Art Deco, Art Nouveau, and the post-war period. Linen with floral patterns of contemporary designers such as Jurgen Bey and Chris Meindertsma is also shown.

Traditionally hunting- and flower patterns where used in Damask table linen. A common pattern is the "gesayde bloemen". Researchers say this pattern goes back to an old tradition. People use to sprinkle flowers around in their house as table decoration and on the ground. Still during processions flowers are used to cover the street like a colorful carpet."

I totally read over that last bit the first time..it's almost creepy..enough about people making temporary traditional carpets, continuing with the lilies. 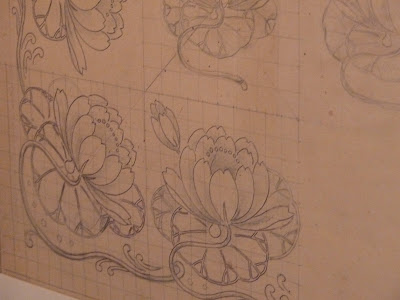 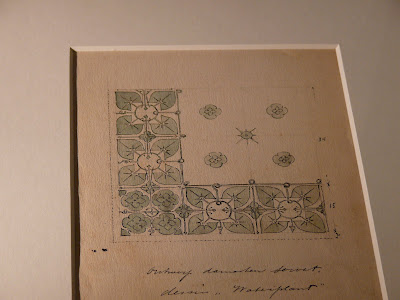 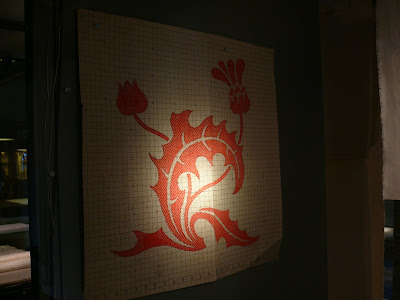 When I saw the sketch for the table linen design with Water lilies, it reminded me immediately of Batik. They simplify the flowers without making it abstract. The pattern "Water plant" looks much like the Batik pattern Kawung. The batik motif "Kawung" is a very ancient motif as can be seen in the carved stones of some Hindu and Buddhist temples in Java island built since 7th century.
The red curl is almost like a garuda from Batik Lasem. 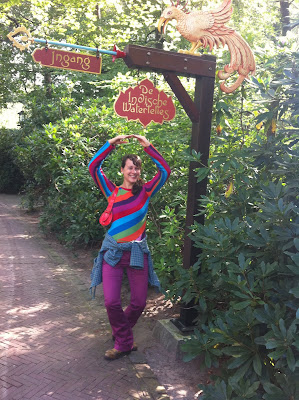 Me at the entrance of the Indian water lilies

The design of the water lilly inspired me and I had this feeling I have to do something with it (and still have). A water lilies has a exotic, sunny feeling to it like a Sunflower, but more mysteriously. I went looking for a connection between Water lilies, Damask, Batik & my interest for it. Haven't found a water lily pattern in Batik from Indonesia yet, but found a lot of related things.

The synchronicity starts with my love for the Indonesian/Indian Water lilies from the Efteling ( a theme park full of fairy tailes). This attraction tells the story of these beautiful fairies who love to dance. One night 7 of them didn't stop dancing, the moon goddess called them to turn back in to stars, but they wouldn't listen. A witch had them under her spell, and let them dance ever since when the moon reaches the sky, poor little fairies. 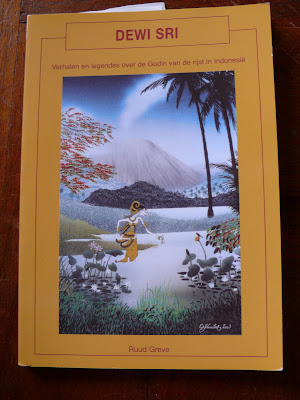 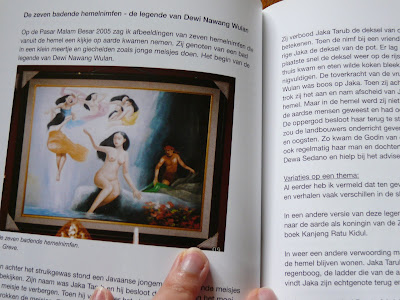 The story is loosely based on a Indonesian folktale about Dewi Nawang Wulan. This Dewi Nawang Wulan is also know as Dewi Sri. In August I also visited the Museum Nusantara and I bought this wonderful book about Dewi Sri there. The book written by Ruud Greve is full of traditions, stories & legends about the goddess of rice and one of the stories is the story about the 7 bathing nymphs ("hemelnimfen"), the legend of Dewi Nawang Wulan. On the cover of the book Dewi Sri is walking in a Sawah filled with, yes, Water lilies.

As I mentioned before I didn't found a Indonesian Batik with Water lilies, but I found something else. Apparently the national flower or symbol of Sri Lanka is a water lily, and "drumroffle" they make Batik in Sri Lanka. A friend of mine is going to Sri Lanka and she promised me to look for Water lily covered Batiks, so the story continues!

Now maybe your thinking what's all this talk about Water lilies. so I like to end my longest blogpost ever (at least the most hours spend on one blogpost) with a picture made by my grandfather that hangs in my studio & if you have time and no plans this weekend, go to the exhibition "Made by Vlisco" at the Gemeentemuseum Helmond. It ends 23 October (if you go, let me know, I would love to hitch a ride!) 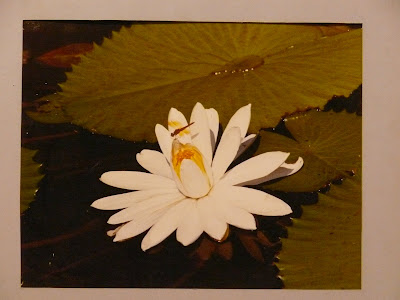 Dia put to photo by my grandfather Aad van Toor