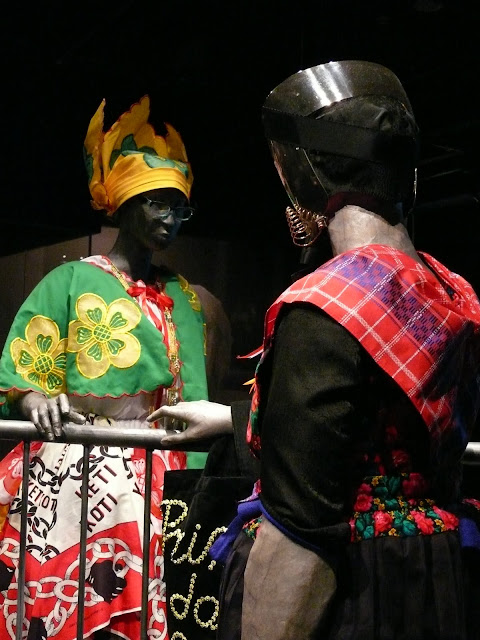 Cloths from Staphorst/Rouveen as worn on "Prinsjesdag" versus modern koto,
as worn for Keti Koti, the annual celebration commemorating the abolition of slavery (2010)

Went to Arnhem last week to visit the exhibition "Sweet Wilderness" by Surya de Wit. She just finished the Art academy and Already filled a room with beautiful new work. The following day I had an appointment in the Nederlands Openluchtmuseum.
This museum is best know for its folkloric park filled with typical Dutch historic houses and farms. In Summertime they show how the occupants lived and were dressed. I was never a big fan of our folkcostumes, but with my new found interest for Dutch folkart and traditions, I have found a new perspective towards the subject.

Frida Kahlo is being seen as an exotic, authentic artist. Because she is folkloristic, wears the traditional national folkcostume, is fascinated and inspired by her history and roots. If you do the same in the Netherlands (wear wooden shoes and a lace cape, know your Dutch history & traditions) they think you are hopelessly rigid, old-fashioned and boring. But I start to think that this isn't true.
Vikings, Spaniards and the VOC flooded our country with chaos, gold & other riches. While doing so they influenced us with all this different cultures.
Nowadays we're busy with what is typical Dutch, protecting our little country from cultures abroad.
But what is typical Dutch? Do we even know? Have we forgotten?
It's nothing more than a vague memory of a farmers life back in the day filled with Burgundian happiness (in Dutch we say: "gezelligheid").
I'm not saying we should all start wearing wooden shoes and make a circle and do a clog-dance. What I'm trying to say is that we have a history in which we are influenced by so many cultures, and that is fantastic, fascinating and thrilling, and why not embrace that and find out what influenced us and why.

I had an appointment to get more information about sand- and flowercarpets. On my site is a bit more about that (in Dutch, see post De reis naar Batik. I will address this subject later on my blog. The Nederlandse Openluchtmuseum have a very interesting collection of folkcostumes and folkart. I contacted them and recieved an email that they had 30 photos of sandcarpets and sandcarpetmakers. Also they had a film in their collection by D.J. van der Ven. A very interesting man, I will make a blogpost about him soon. A few weeks back a ordered a filmfragment about the flowercarpet made during the procession in Asselt-aan-de-Maas and it turned out to be the same, so now I know the maker!

After the appointment me & Koen had some time left so we visited the park and we found a very beautiful exhibition in the basement of the entree-building. The exhibition is called "Kleur Bekennen in streekdracht en kotomisi" (translated: "Show our colours in folkcostumes and Kotomisi/Koto"). 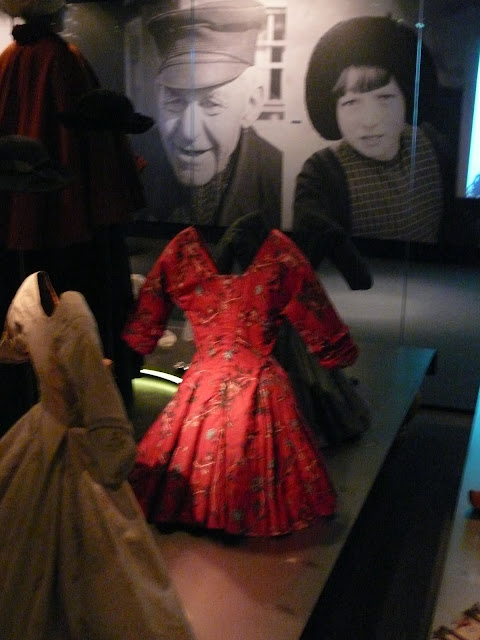 In 1969 the NV Billiton Maatschappij donated 8 Surinamese kotos to the "Collection of Queen Wilhelmina". This collection was managed by the Nederlands Openluchtmuseum. But the Koto's were never on display. The management found that the clothing didn't fit in a museum about Dutch culture. Suriname was then still part of the Koninkrijk der Nederlanden. Nowadays wearing koto is a way for Dutch women from Afro-Surinamese origin to show their identity. The Openluchtmuseum decided to show their colours and gave the kotos a prominent place in their collection.

There are different stories about how the Kotomisi tradition started. Dutch plantation owners would have forced enslaved people to wear different clothing. So Koto is being seen as a painful legacy.
Another story tells that Kotomisi developed after the abolition of slavery in Suriname in1863.
The Koto got its characteristic form after 1879. It was forbidden to walk around shirtless for women, so the short wide yak become fashion.
In "Kleur bekennen" they show the Dutch folkcostumes next to the kotos. With video projections Dutch and Surinamese women tell why they wear folkcostumes. In the Surinamese community it's becoming more popular, but in the Dutch society it's almost extinct.
Reasons that it got extinct are: people become more mobile and visited other regions, in WWII it was difficult to get fabrics for making costumes, there were very strict rules for mourning-clothing (you end up wearing mourning-wear all your life) and it took a long time to get dressed.
In some places in the Netherlands folkcostumes are still worn, but mostly for special occasions and tourism. 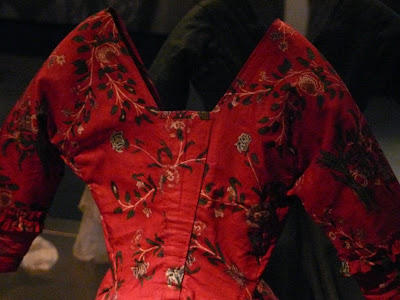 In 1675 the Dutch East India Compony (VOC) began importing brightly coloured chintz ("sitsen") from India. This yak is from around 1750-1775 from the Zaanstreek 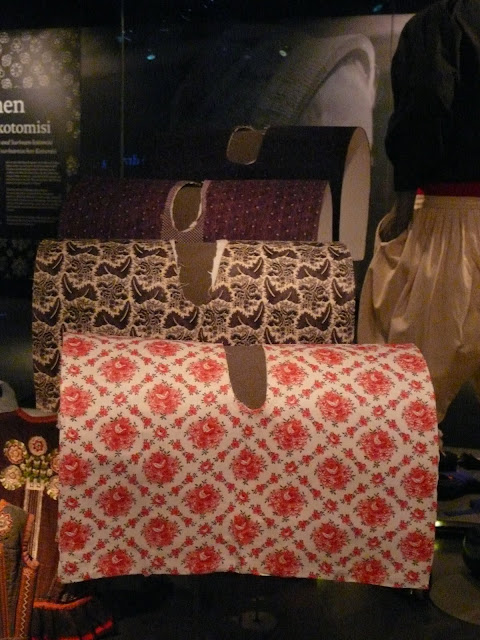 Thanks to Roman K. with his great blog FolkCostume & Embroidery I know what these are.
Angisa's, textile with a message. The origin of this folded head cloth lies in West Africa.
I helped him translated some Dutch info about "koplappen/kroplappen".
Read more about it in his post about "Costume of Volendam, North Holland, The Netherlands" 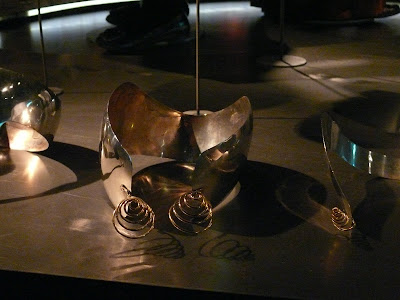 Oorijzer/‘ear iron’, a gold, silver or copper band with decorative ends
used to secure a woman’s cap on her head 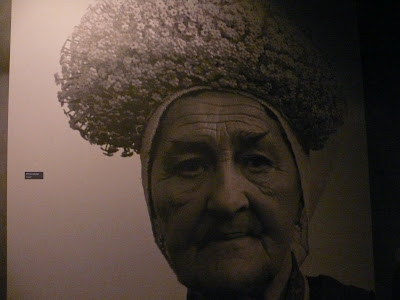 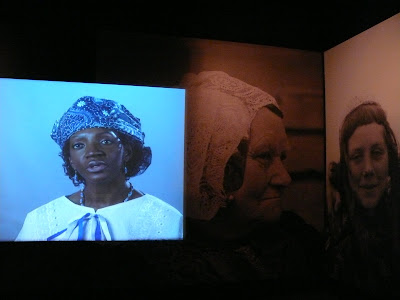 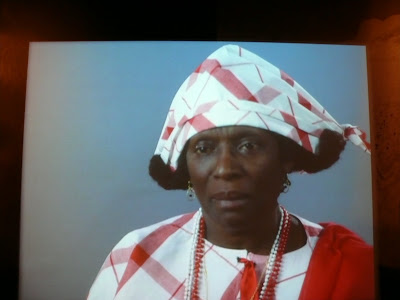 Her Koto reminded me of Oost-Indisch bont.
I wrote about it in the blogpost "Checkmate" 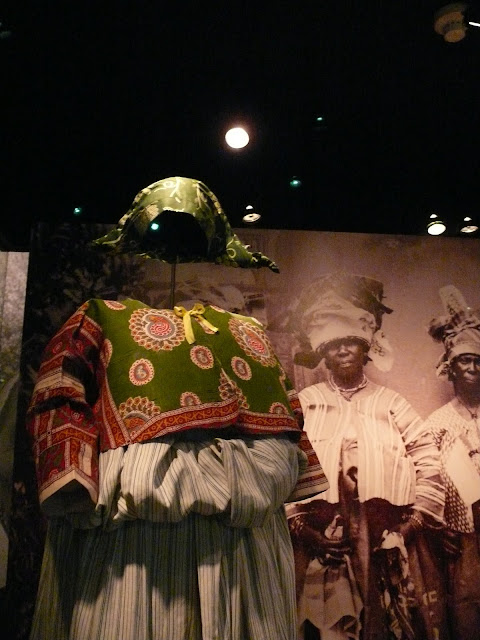 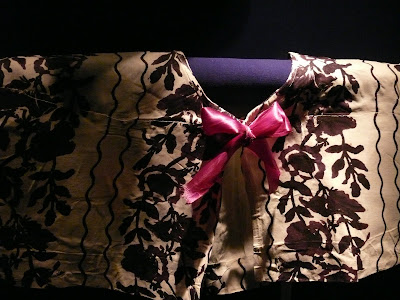 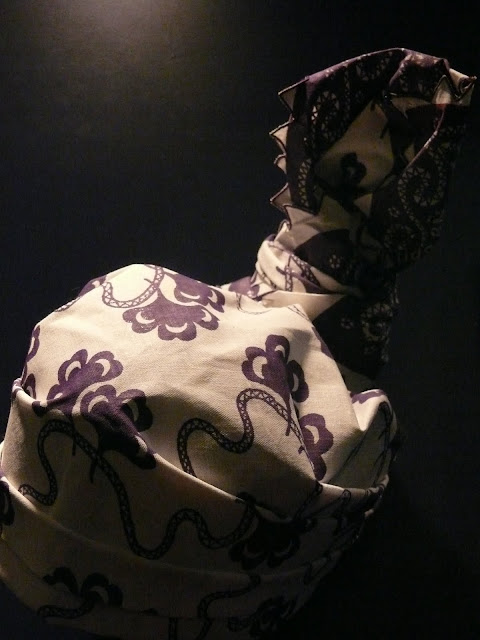 Angisa's, textile with a message. The origin of this folded head cloth lies in West Africa.
The way the head cloth is folded gives expression the the feeling of the wearer.
Sometimes it's a silent for of protest or a way to show happiness.
This one means: "Call me on my cellphone". 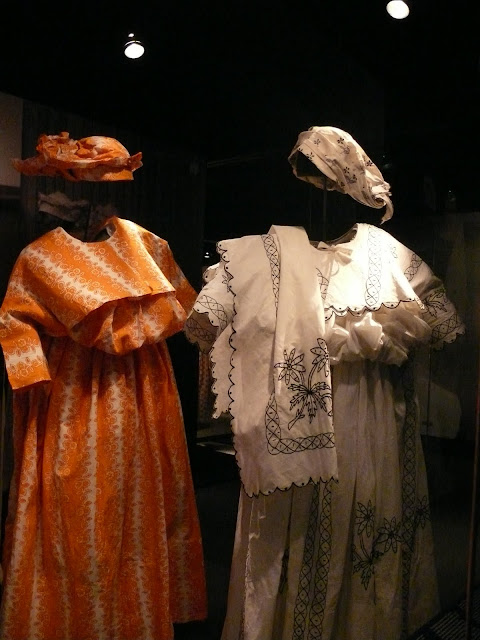 As you say, it is very difficult to know what is real tradition and what isn't, and with countries like the Netherlands and Britain with colonial empires in their past, it makes it even more complicated.