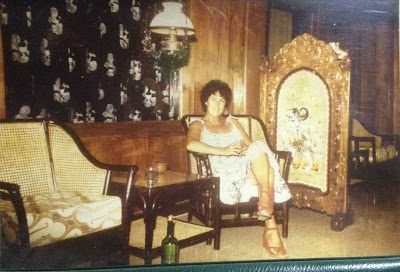 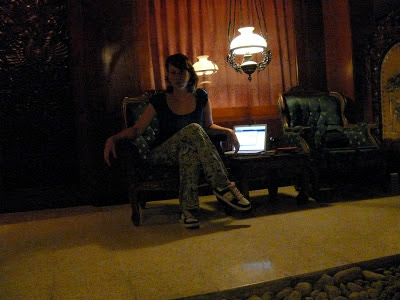 I made some synchronicity posts in 2009. For example that Batikday is celebrated on my birthday, that I named my little ricebird batik and that this is a brand in Indonesia, that me and Emmy Dijkstra both returned from a journey inspired by patterns on fabrics (see label 'Synchronicity').

It's not that I didn't had moment of synchronicity ("Wow, what a coincidence!"), but this one was a really big one.
Last week I visited my grandparents in Uden. My grandfather was showing his book-collection about birds in his study, because I'm doing a project in march about birds, butterflies and other garden residents. On his desk and windowsill are photos of the family. My parents at their wedding, me in various ages, a young aunt and uncles and my grandmother on different sunny places around the globe.
I surely saw them before, but now this one photo looked so familiar. I asked my grandfather how many times they visited Indonesia. He told me 9 times, they planned a 10th time, but they had to cancel it. I asked if that photo of my grandmother was also in Indonesia, because it looked a lot like the hotel I was in. Yes, he said, that was in Puri Artha. No way, I was at Puri Artha the first days in Indonesia. I took a picture of myself the evening I arrived (see post 'First night'), I will look it up for you...

Email ThisBlogThis!Share to TwitterShare to FacebookShare to Pinterest
Labels: Synchronicity