Last week my first article for ModeMuze went online, 'Batik ‘Tiga Negeri’ & Java Print ‘Good Living’ jippie! Because it is in Dutch, I translated here for you. The article is a revisit to a subject I blogged about before, the Java Print 'Good Living' by Vlisco, and of which I learned more.
And even more after my article on ModeMuze got published! So read the translated and extended article down below, enjoy!


What have the most popular Java Print in Ghana and most expensive Batik from Indonesia in common? A lot and much more then I thought! 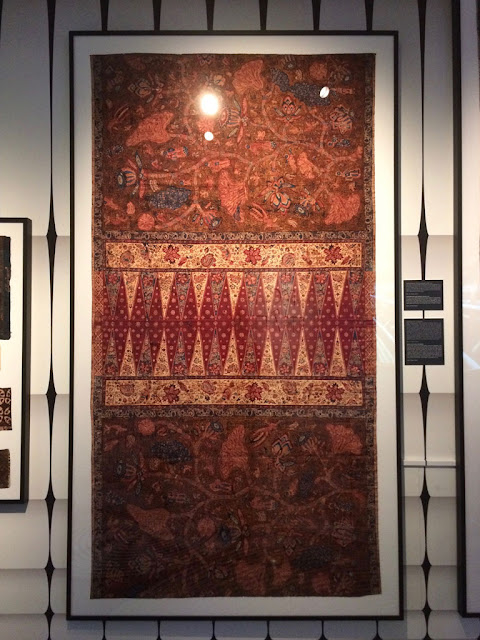 Batik at the exhibition 'Vlisco 1:1 Un à Un' in Helmond

In the exhibition to celebrate the 170th anniversary of Vlisco, the Wax print manufactory in Helmond. The Batik I wrote about in the post 'Good Life' on this blog. But this post was not about this Batik, but about the identical Java Print designed by Vlisco. I already suspected it was a copy of a Batik. so I ended my post with the wish to see the Java Print next to the 'original' one one day. I promised to revisit the subject when I learned more and you can imagine my surprise seeing this almost identical Batik. Not only identical in design, but also in its meaning, its history and its popularity today.


Lets start at the beginning. The Batik in red, blue and brown, shows a combination of patterns from different regions. End of the 19th century it was common to bring these different motifs onto one cloth. On Java, Indonesia, Batiks became more popular in the middle of the 19th century and the wearer was less concern with the rules of which motif belong to which region. Batik makers started experimenting with colours and patterns from other areas. This is how 'Tiga Negeri' Batiks got invented. 'Tiga Negeri'  means "three countries", or in this context "three states". 'Tiga Negeri' refers to the making of the Batik on three locations. Sometimes only the colouring of the cloth, but sometimes also the applying of the wax was done on three different locations on Java. The red and blue was done in matching motif in the 'Pesisir' region on the Nord coast of Java, the brown was done on the other side of Java in the so called ‘Vorstenlanden-style’. 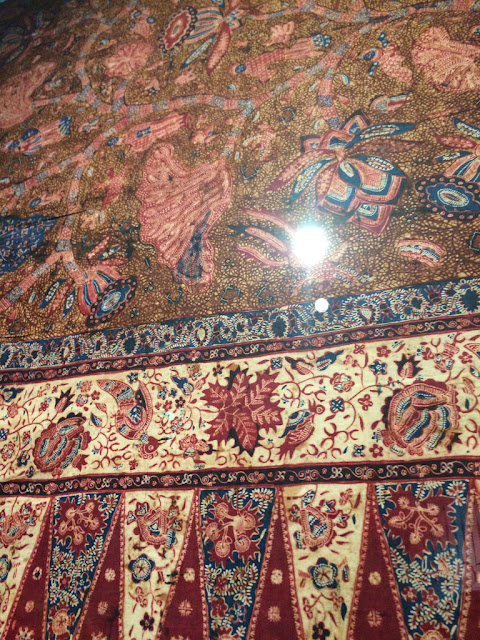 Detail of Batik at the exhibition 'Vlisco 1:1 Un à Un' in Helmond


At the end of the 19th century there was a lively trade in all sorts of textiles on Java among which 'imitation batiks'. This one-side printed cottons are introduced on the market beginning of that century by i.a. the English, Dutch and Swiss. Sales increase when the textiles are colour-resistant, washable without losing its colour, and printed on both sides. These cottons were the predecessor of the now well-known Wax prints, but have a market of their own.
End 19the century the 'imitation batiks' were not only sold in Indonesia as a cheap alternative for Batik, but also found their way to East Africa as ‘Khanga’ fabrics for Tanzania and Kenya. Later they went as ‘Fancy prints’ or ‘Java Garments’ to i.a. Ghana and Nigeria in West Africa. Now the prints are best know as ‘Java Print’ by Vlisco.

‘Tiga Negeri’ Batik was made on three places on Java and later got inspired by three places in the use of pattern and colour.  Today a 'Tiga Negeri' is the ultimate way of showing your skills as a Batik maker. The design allows you to work in different styles, but most importantly you can fill the cloth with as many patterns as possible. This in combined with a lot of colours: the base in red, blue and brown, and today even yellow, green and lilac, makes a 'Tiga Negeri' one of the most expensive Batik designs today.

And when do you wear such an expensive Batik? When you can married of course! 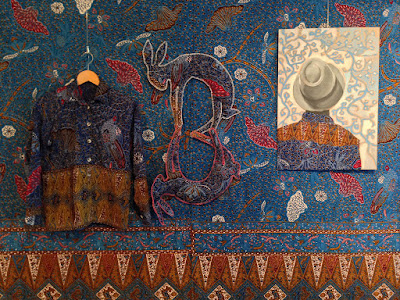 Work by artist Renée Koldewijn made and inspired by 'Good Living'
On the wall a original Vlisco, lighter blue then
the Chinese 'Hitarget' copy, that was used for the shirt, hares and painting


The big motif on the Batik is builded up out of floral vines with lotuses and flying birds. The motif is based on the frequently used 'Tree of Life' from India that is also common in the fabric Chintz.
Chintz were traded and copied in Europe and Indonesia already from the 17th century. The 'imitaties batiks' were a direct result from this. The 'Tree of Life' can be found in many religions and is a symbol for getting knowledge through growth. A Lotus stands also for purity, because it grows from the mud producing beautiful flowers. A Tree Of Life from Lotus flowers is what you wish as newlyweds for your future together.

The Java Print' is already 75 years a bestseller in Ghana. Batiks get named after the maker or type of design, with the Java Prints this goes different. The sellers name the fabrics. In this case  ‘Good Living’. The cloth is worn to protect against jealousy about your good life. "A good life
brings forgiveness” says an owner of this print in the video ‘The Currency of Ntoma'
by Godfried Donkor.

So what have Java Print 'Good Living' and Batik 'Tiga Negeri in common? Almost everything! Two fabrics on two locations in the world connected in their history, their design and meaning for already a century. 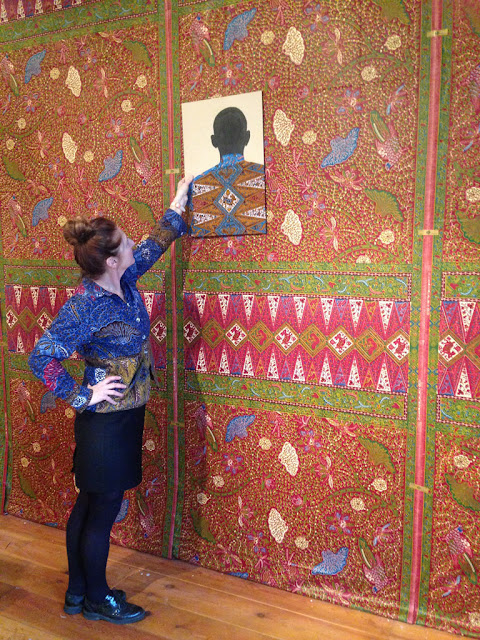 After the article got published by ModeMuze, I got a friend request on Facebook. I normally don't accept so fast, but her pictures made me happy at once.
It turned out I wrote my article about artist Renée Koldewijn favourite fabric. A fabric that inspires her and of which she made many artworks. I was happy I could use two of her pictures in this post. The first picture shows a painting, shirt and rabbits sculpture made from a Hitarget copy from the classic Vlisco 'Good Living' design. After discovering this Hitarget fabric was a "fake", she found the original from Vlisco and got even more inspired by it. I love the image of the Java Print wall, with the artist dressed in the Java print (Chinese copy) holding up her painting of Obama with a 'Good Living' shirt on!

"This motif became a second skin. I wear it daily and even added it to my interior  This is my home. We are one, my house and I, we blend together"


Thanks for sharing Renée! 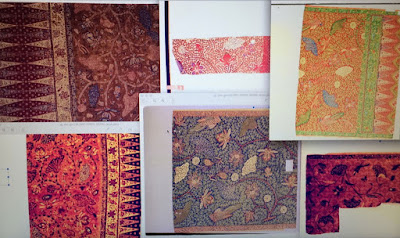 Screenshot while preparing the article for ModeMuze