What happened to Von Franquemont

My second ModeMuze article went online about two weeks ago. Because it is in Dutch, I translated here for you. The article is my quest to solve one of the mysteries about Carolina Josephina von Franquemont (1817-1867). I hope in time to solve more and unravel the true story of this inspiring Batik maker. Enjoy!

Swept away and disappeared: 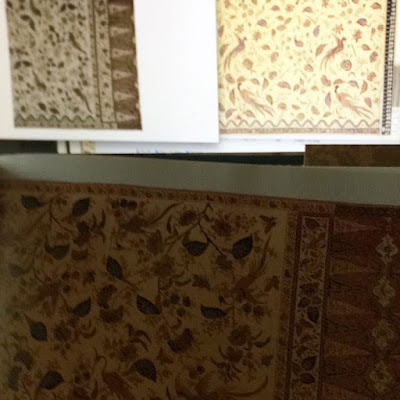 Batiks that could be from Miss Franquemont's Batik workshop


On of my favorite things about blogging is gathering, exploring and unravel (for me) new information. As a detective I read my way through time and let old times come to live in my imagination.
A fabric, a motif or a sentence can be enough to pull all my books from the shelves (I own two bulging bookcases with partly read books) or google search terms. Often I found something else then what I was looking for.
A similar kind of quest started after re-reading Daan van Dartel article about Batik Belanda on ModeMuze. Batik Belanda is on of my favorite subject and Carolina Josephina von Franquemont (1817-1867) on of my favorite Batikmakers from that time.


Von Franquemont started her Batik workshop in 1840. This lady is seen as the 'Mother of Batik Belanda', the first to make Batiks on Java with a mix of Javanese and European motifs for a just as mixed clientele. She was already famous when she was alive, she created an unique green and her life ended spectaculair. In 1867 she got swept away together with her Batik workshop when the volcano Ungaran erupted.
On ModeMuze Daan van Dartel writes she disappears with an earthquake. That sparked my curiosity. How was it again?

At the foot of the Volcano


I pictured myself during a next visit to Java standing on the location where once was her Batik workshop. Online I started looking for the exact place of her swept away workshop. It was established at the foot of the volcano Ungaran, written in old Dutch as ‘Oengaran’, in the region Semarang. Searching for Ungaran, in combination with her name, I came on this blog. Next to a short description of the Batik maker and her Batik neighbor Catharina Carolina van Oosterom-Philips, was a newspaper article of C.J. von Franquemont’s death. The name was right, the location was correct, the year also, but it said in old Dutch “Heden overleed alhier, na eene langdurige ziekte, me jufrouw C.J. von Franquemont” / "After a long term illness, Miss C.J. von Franquemont died today".

“After a long term illness”?

Being swept away and long term don't really combine that well. Was this a different Franquemont?


I grabbed my books. Veldhuisen’s ‘Batik Belanda’; in 1867 swept away after eruption of Mt. Ungaran, Inge Elliot’s ‘Fabric of Enchantment’ Ditto. Daan van Dartel for ModeMuze, in “June 1867” with an earthquake instead of eruption. Van Dartel refers to Veldhuisen and Veldhuisen refers to “De Batik-kunst in Nederlands-Indië” by G.P. Rouffaer and Dr. H.H. Juynboll.
Long live the internet, because I found a downloadable version of the book from 1899. 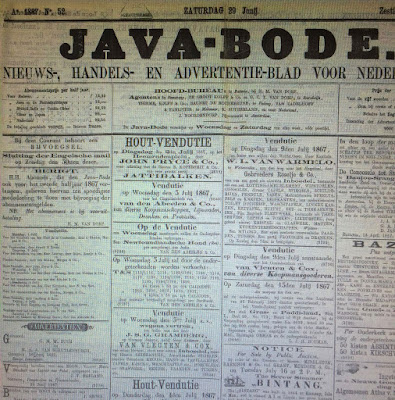 
Next to Rouffaer’s striking vision on the development of the Batik world — he has a rather low opinion of the European "distasteful influence" on this artform— I read “Carolina Josephina von Franquemont nu, was op 25 Maart 1819 te Soerabaja geboren, en overleed te Oengaran op 10 Juni 1867, den eigen dag der aardbeving die vooral de residentie Jogjakarta zoo teisterde” / “Carolina Josephina von Franquemont, was born on 25 March 1819 in Surabaya, and died in Ungaran on 10 June 1867, on the day of the earthquake".

Aha, there was an earthquake!

Carolina von Franquemont Sister put the obituary in the 'Java-Bode'. The same newspaper was filled with reports on the earthquake that shook Java. From different places on Java messages were published that read like eyewitness reports. Also Semarang was affected. Clocks stood still, while the fortress bell kept ringing. Houses in the Chinese camp collapsed. In the region Semarang only some buildings showed cracks and a garden wall fell over.


The mountain or volcano near the place Oengaran was not mentioned in the Java-Bode. The earthquake was not an result of an eruption. I even found out that no historical eruptions are reported of the deeply eroded volcano Ungaran.
Is "On the day of the earthquake” misinterpreted? A cumulative error? Or was it a landslide that swept away Franquemonts home and colour recipes?

In the book ‘Java, Past & Present’ from 1915 is nicely written how due to heavy logging by the in-laws of Miss Von Franquemont an Hindu temple ruin is uncovered in 1877 on Mount Ungaran. But not a word about landslides.

The Batik on the bottom left side is maybe made by Carolina Josephina von Franquemont (1817-1867). Von Franquemont is a Batikmaker who is seen as the 'Mother of Batik Belanda'. The story goes that she got swept away from earth by an volcanic eruption 🌋Or disappeared with an earthquake...On @modemuze.nl my article (in Dutch) on what really happened got published yesterday (link in bio) #modemuze #blogging #batikblogger #batik #batiktulis #wayang #batikbelanda #vonfranquemont #carolinajosefinavonfranquemont #rouffaer #bulletinkoloniaalmuseumhaarlem #koloniaalmuseum #haarlem #kolonialegeschiedenis #1908 #history #colonialhistory #detective
A post shared by Sabine Bolk (@sabinebolk) on May 16, 2017 at 2:00am PDT

Mysterie around her death and Batik heritage


If Miss von Franquemont didn't suddenly disappeared, but died after a long term ilness, what happened with her Batik designs and colour recipes?
Is it still a coincidence that the moved away Batik neighbor Van Oosterom made almost the same designs and later developed ‘Prankemon’ green?
There are no signed Batiks from Von Franquemont, or from Van Oosterom? There is a Batik ascribed to Franquemont with a note with the written words ‘Semarang - Ungaran’ on it and there is one with a stitched note with ‘A van Oosterom’.  But who made what exactly? And moreover there where next to their workshops also other, Chinese, Batik workshops active in that region.

So there you have it, alternative facts are of all times and even the smallest piece of information can raise more questions then give answers. And precisely that makes blogging so much fun!

What a fascinating article! Well done! I really enjoyed reading that and always wanted to know more about Carolina Josephina von Franquemont. Thank you so much for sharing that. Could it possibly be that she died after a long illness and her death day just happened to fall on the day of the earthquake? That would have given her time to sell or give her recipes and designs to Van Oosterom. April Indonesia

Thank you for your comment, sorry for the late reply. Yes, indeed it was just the same date, not related to her death. So I am currently trying to figure out if her batik-legacy was passed on another maker, but I also am trying to figure out which batiks are actually made by Von Franquemont. Some goes for Van Oosterom, both didn't signed and most attributions to them are done after they passed away.
Please check my website for the continuation of my researchproject: https://www.sabinebolk.nl/projects/project-re-telling-the-history-of-the-indo-european-influence-on-batik/

Thank Sa ine for this write about Vin Franquemont. I think you are opening the door of a beehive and revealing the many facts we took for granted but are not really related to the true picture of the times. Thanks for opening our eyes.

Thanks you John, your support means a lot and looking forward to what you have to share on this history also!

There is a batik exhibition on display till 2021 in Bangkok at the Queen Sirikit Textile Museum. It is from the batik collection of King Chulalangkorn which he gathered on three trips to Indonesia in the late 19th and early 20th centuries. Amongst them are several pieces identified as Van Franquemonts. This is the first time his collection has been on display and the newly discovered Von Franquemonts are quite exciting. The exhibition is well worth a visit. Those interested in more information about the batiks in his collection and about Chulalangkorn himself can read my articles:

Dear Tamalia,
thank you for reaching out. I been to the exhibition after my visit to Java and saw then two pieces attributed to Von Franquemont. They are included in my research with the support of the museum :) Wrote a review on the catalog also on my blog. Please visit my newer post & website for updates on my research. And if you find any more batiks of info on Von Franquemont, feel free to reach out to me.
Thank you,
Sabine