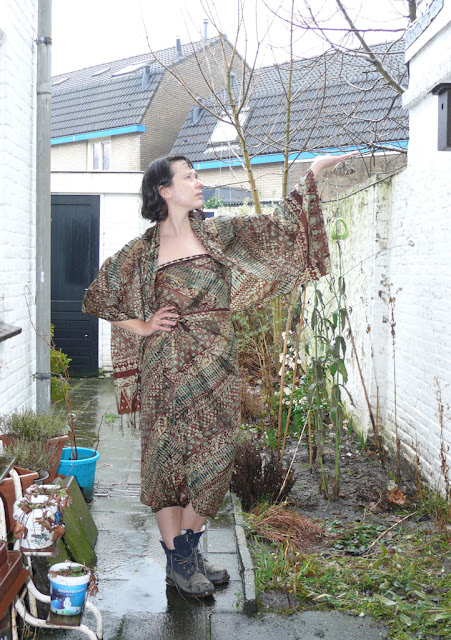 Last month I posted my first Batik Statement Pattern Edition. Time for a new one! With this series of 'statements' I try to explain the meaning of a pattern or motif. During my journey on Java last year, I noticed that every dot or line on a Batik has a name. Sometimes the Batik as a whole represents something, but also every individual detail has its own name and meaning. To learn a little more about Batiks and their story I thought it would be nice to capture their meaning in 'Batik Statements'.

Let me introduce: Udan Liris.
Udan Liris means "Light Rain" or drizzling. Or in Dutch "Motregen". When rain in the Netherlands starts falling diagonal it means it rains pretty hard, but in the case of this Batik motif we are talking about the light, drizzling stuff.
This Batik design is always made out of diagonal lines of different or similar widths. The lines are filled with different motifs. I believe there is a number of different motifs being used to create a ritme, but I forgot if it is always the exact same number of lines (if you know, please comment below!). These filling motifs can have each their own meaning, but together they are Udan Liris.
The motif is diagonal, like the the Parang motif I described in the previous Pattern Edition, and it is also traditionally in brown, black (blue) on white.
Today, likewise with Parang, this motif is mostly made with cap, but still some brave Batikmakers do it by hand. Ibu Rasminah was making one when I was visiting her in Batang with lines of 1 to 2 centimeter width. She didn't liked making it, because she got dizzy from it. I bought one from her with thick lines which will be featured in my book. The one I'm wearing in the statement is a gift from Sacha Lannoye, thank you dear! She bought it on Bali wear it is worn when going to temples. To capture the meaning of Udan Liris I posed for you in rain, heavy thick rain. I thought that if the rain was heavy enough my camera would capture it...Mind you, it was February when I took this photo...it didn't, but I still think it is a clear rain statement.

The maximum of lines is between 7 till 11 different motifs that then repeat again. Seven lines is most common and used to be for 'princesses',. Nine till eleven lines shows the height in rank of royalty. Eleven is for the highest, the Sultan and his family.
Thanks Renske Heringa for sharing this information with me and the readers of  this blog! And thanks you, Renske, for reading The journey to Batik!


To celebrate the 5th anniversary of my Batik Statements I'm making a magazine! A magazine with all my 'Batik Statements' from 2012 - 2016. It will be limited edition and only €10,- > pre-order now at sabine{at}sabinebolk.nl !