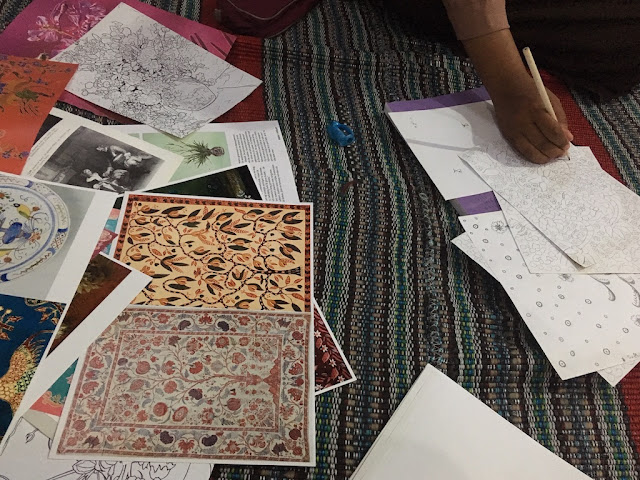 On Sunday morning 6 October I went to Miss Siti home. I was at her sisters home last time and filmed Nurul with her sister, mother and aunt making Batik. I met Miss Siti when I came before, meeting the family and was surprised to find someone there speaking English very well. I discuss with Miss Siti many things regarding Batik; natural dyes, experimenting on different fabrics and how to improve on synthetic dye. I asked if she was interested in hosting a try-out Workshop. I hope to return next time organizing a Summerschool for batikmakers. In this Summerschool I hope to work with different subjects regarding the Indo-European influence and what knowlegde had been lost, like for example dyeing Batik with Mengkudu red. As I try-out I prepared a workshop on the development of the ‘Buketan’ motif. Now still used in Pekalongan, but you find it through out the North coast in different versions. Some look more like the origin of the motif, an Indian Tree of Life like in Chintz, or the Peranakan Chinese vase also found on ceramics. The Buketan looks more like old Dutch vanitas painting or like French wall-paper motifs. I included images of Batiks next to their source. To my surprise they right away took the photo of the ‘Nutmeg’ Tree of life Batik attributed to Von Franquemont. They made drawings of their classic motifs and the resemblance is very strong. An interesting find that I did not suspect. 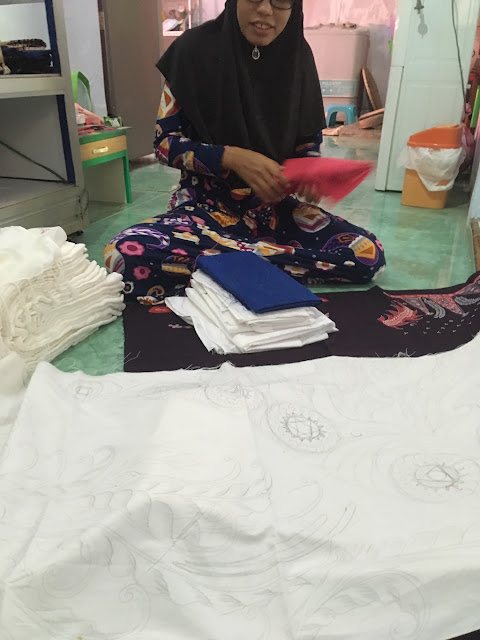 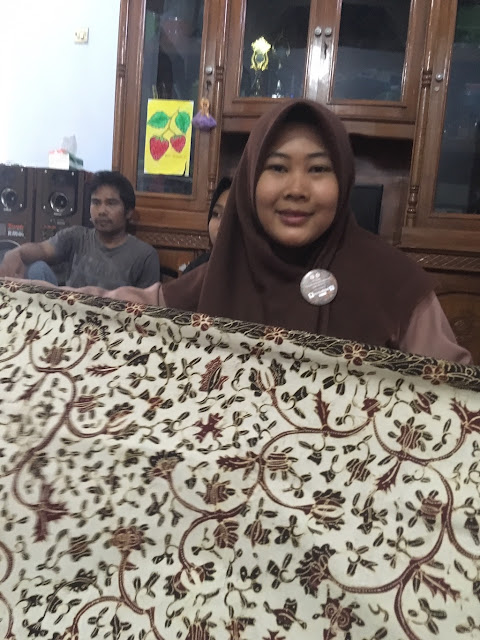 Miss Siti also shared her experiments with me of Natural dyes on locally woven textiles. She views her work as a Batikmaker much more as an artists then working in the tradition of the region. I am happy I could already buy some of her works & ordered new ones also. She will be one of artist joining my ‘Tiga Negeri’ project. Looking forward to her version of the Java Print classic ‘Good Living’.
Miss Nurul shared her finished Batiks, beautiful fine detailed selendangs. You don’t come across them often, they take much more time to make and so many makers prefer to make Sarongs they can sell for a higher price. Actually all Nurul’s Slendangs were priced the same, so I adviced her to price them according to detail, amount of time making. Hope she asked more next time. She makes the Batiks in her free time and in her holidays. She loves making them and I am so happy this new generations is her to continue the Batik legacy of the Batang region. Also Nurul’s younger sister is making them and their mother is so proud. So am I!  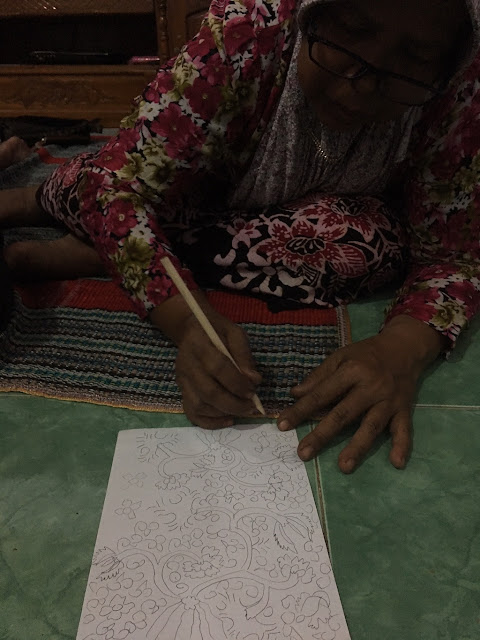 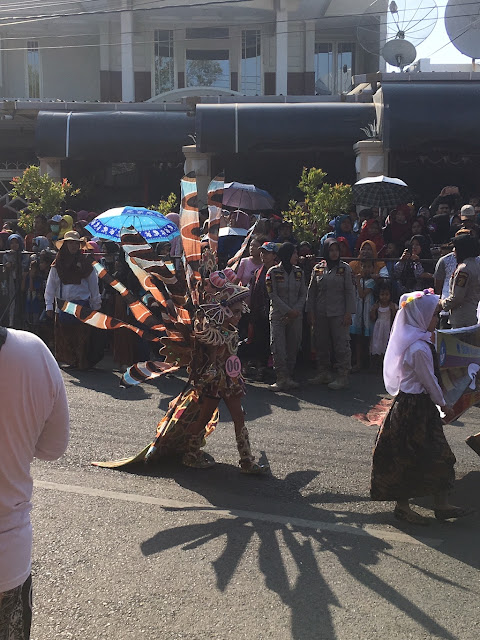 After a delicious lunch Miss Siti prepared for us, I had to rush back to Pekalongan. I was asked to be part of the jury for the Karnaval Kostum Batik, also known as the Batik Parade. It was a dream come true and it turned out being a big job. I got a stack of papers and I had to judge 80 participants in 5 categories on 3 points, creativity & idea - execution of the idea - performance & delivery, extra points could be made for following the theme ‘Sea Life’ and using the ‘Sekar Jagad’ batikmotif. Every participant would show off their outfit in front of us. Some had a dance, a story line with extra participants and some just walked passed us. The outfits were all so wonderful, so much work went in to them and some seemed so heavy for the wearer. It was very hot, yet all smiled. I enjoyed it so much and tried to make a good judgement, many based on how much Batik was used. Most included printed textiles and only a few Batik Cap.
After the parade, the jury had to gather at Museum Batik. It took very long to put in all the scores, but when we had them, it turned out we agreed on the top 5’s. Per category we had to make a top 3 and choose the best model. Every judge could say who should be 2 or 3, on the 1th places we were all agreeing faster. It was so great being able to contribute and noticing how much we thought the same way! 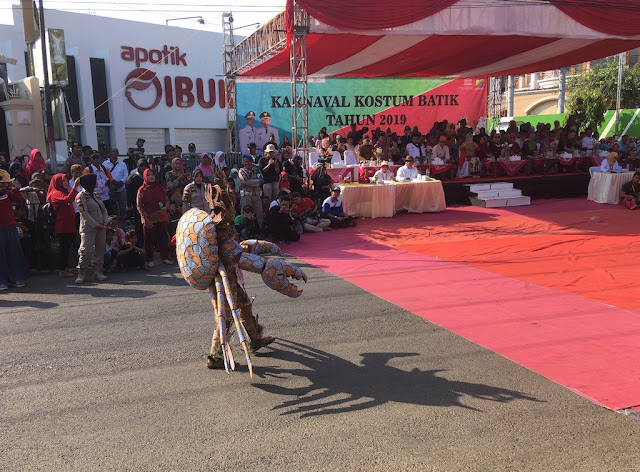 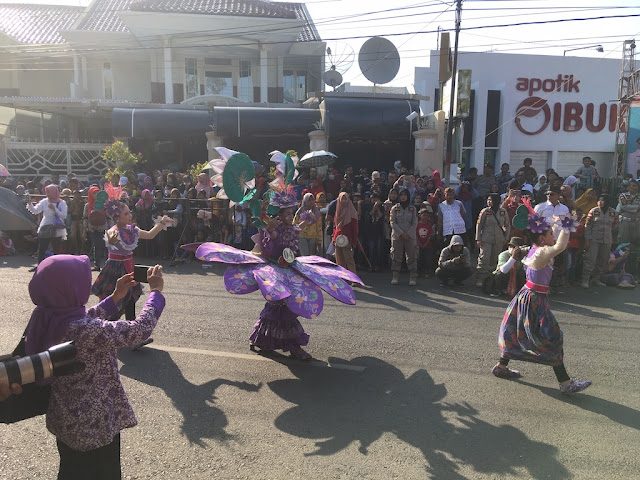 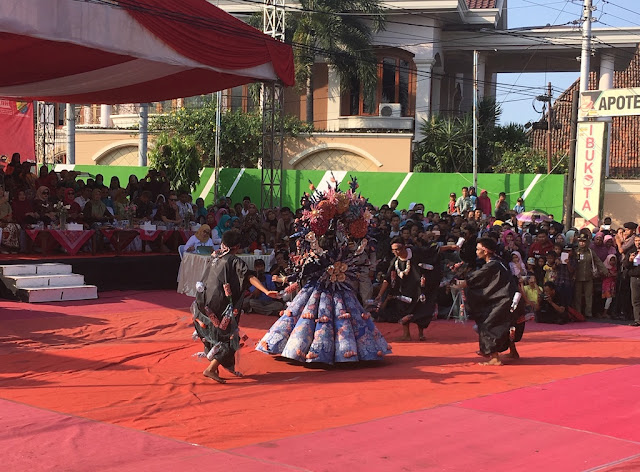  On Monday morning I was invited for a talkshow at the Batik Week event. The Pekan Batik organization was a little more chaotic this year, so my host thought it started at 13pm, will I was on the program at 10am. We started when she arrived. She works at the local BatikTV and had great questions prepared; on my idea about ‘Batik Print’, the difference of Pekalongan Batik compared to other cities on Java, 10 years Unesco Intangible Heritage and how we could improve to love for Batik. Mas Dewa functioned as my translator and added nice points on how Museum Batik contributes to these questions. We didn’t had a big audience when we started, but more came to watch and at the end got applause also from the booth holders. 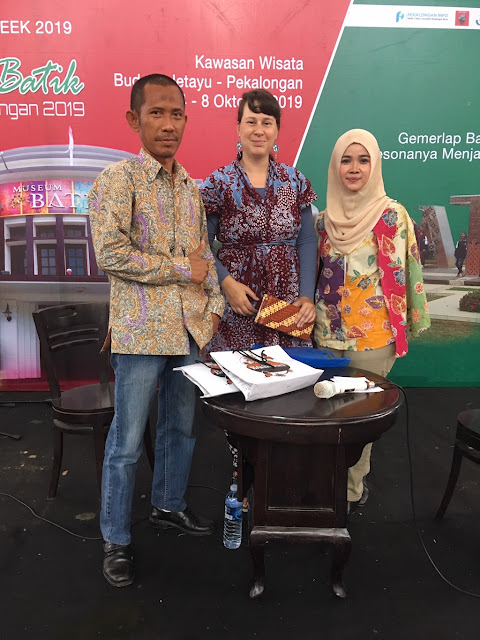 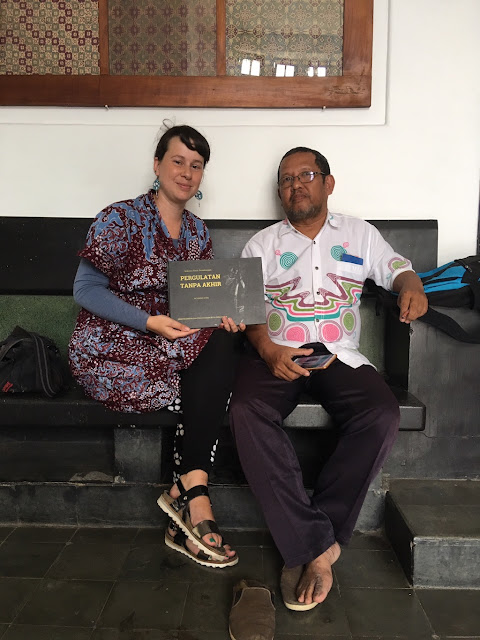 Historian Achmad Ilya, his book and me

In the evening a big Wayang program was being held. I spend my afternoon hanging out at the museum, making jokes with the people there, having Kucing Frederica on my lap and writing a blogpost.
Historian Achmad Ilyas came to meet me, he attended my talk on Friday and wanted to give me a copy of his book on the development of the Batik industry in Pekalongan. This book is only published in a limited edition, so I am very thankful he gave it to me, thank you for this beautiful book. His book described in great detail the history of Pekalongan Batik. We had a nice talk on where to find sources and were to find more. He agreed that in the Netherlands still the most can be found.  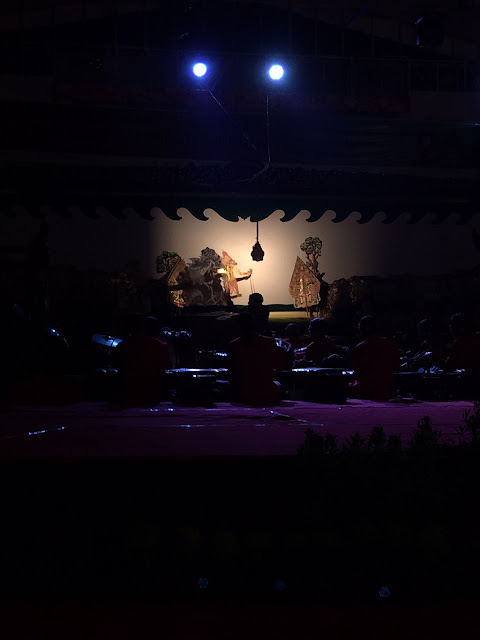 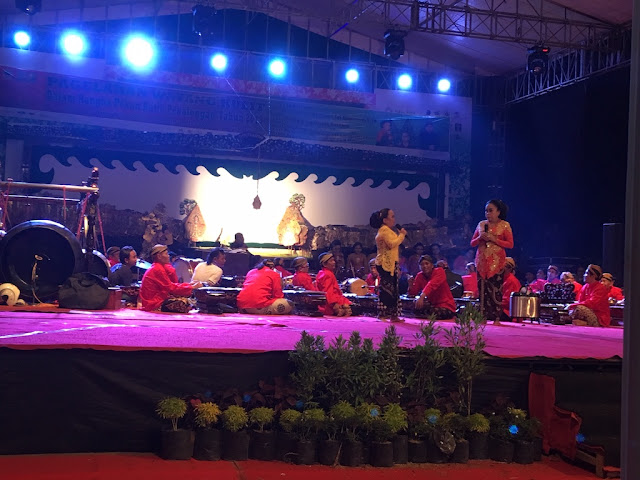  At 20pm the Wayang started. A huge stage with a view on what normally is actually the back of the stage. The performance was a great combination of traditional Wayang with modern twists. The main character come up with a lot of smoke, like in an action movie. It is interesting how fast you get drawn in. The wayang-performer also let the wayang-figures do all kind of stunts, often making them fly off in the group of Gamelan players. This all caused many laughs through the audience. He also made a call on his phone during the performance.
Two ladies came up and did a comedy routine. The singers from Banyumas are famous and madd punchline after punchline. I was moved frontrow - which was nice - until I got invited on stag. The ladies tried to include me in this routine of repeating their dance & words. I had no clue of what was expected of me so I just tried to be so polite and clumsy as possible. I even ended up doing an old ballet routine om Gamelan. Oh my, I wanted to leave that stage so badly. Luckily this culture of embarrassing you like that is seen as part of the entertainment, in Netherlands people would have embarrass me further afterwards and would be mean about it, here people actually thank me later for the entertainment I brought and said I did a good job. 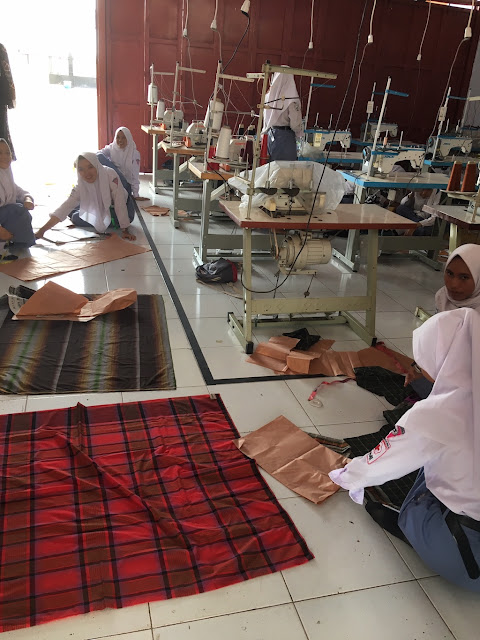 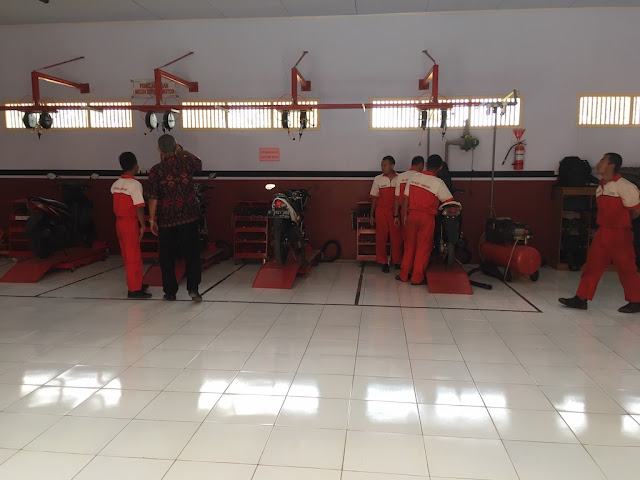 It became pretty late and had to start early the next day. My last part of the program here was a visiting to SMK N 1 Warungasem, the vacational highschool on which Batikmaker Miss Nurul is a student. I met Ibu Asih and other members of the teachers-staff before in Pekalongan and during the event in Batang. They organized a screening of my film for the students. I got a tour of the school were many practical skills are being taught. There is fashion which includes tailoring and batik making, repairing cars and motors, a multimedia class from installing antennas to repairing dvd-players. Also classes in growing crops are given. The motor class was making Shibori and were looking at their finished results outside. Of course a groupphoto had to be made. After the tour, I was asked to enter a classroom. Expecting an empty room, I first saw a banner with my name on the wall including a windmill, laughing about this, I turned around and was created by a full classroom. After speeches of the head of the school, my film was shown.
Girls laughed about the “Hello’s” in the beginning and everyone watched with much attention. After the film students could ask questions. The first brave one asked how I knew about Batik. Not many know that most people in the Netherlands, and even the world, know about Batik. Second question was on the sound ~ I get this response a lot, I made my film with the actual soundtrack, the noises that were there at the time. I of course edited this, so I play with the heavy sound and silence. When editing my film, the noise of the chainsaw on which Dwi dances as if she only hears Gamelan, became such a strong metaphor for Indonesian culture surviving in a fast growing loud world.
Nurul also had a question on Indonesian Batik compared with Batik made in other places. I asked Miss Nurul to bring some of her batiks so we could share them with her schoolmates. She even prepared handwritten notes in English explaining the design. It was great sharing her work, especially since she is starring in the film. I am so proud of you Nurul, thank you for inviting me and many thanks to Ibu Asih and everyone who welcomed me and gave me this wonderful experience.  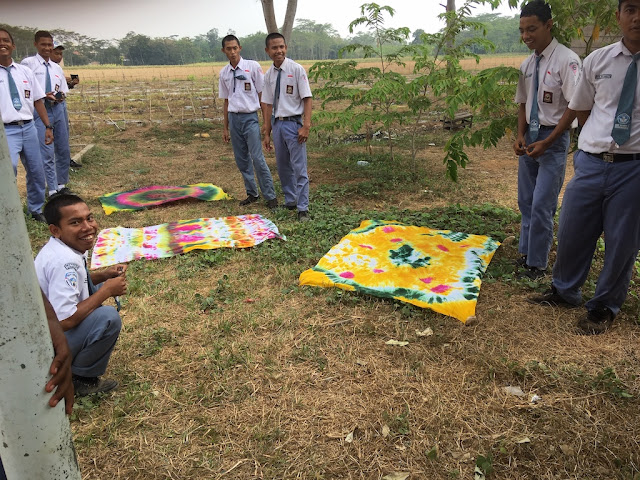 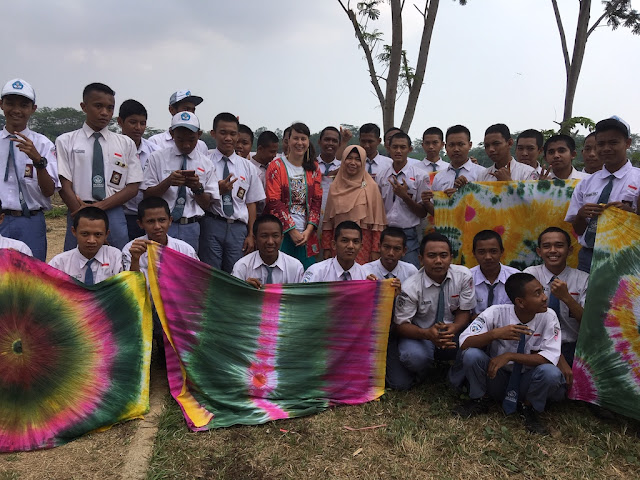 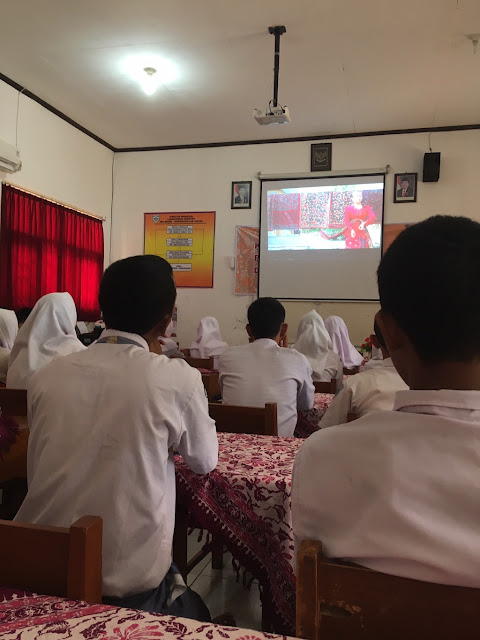 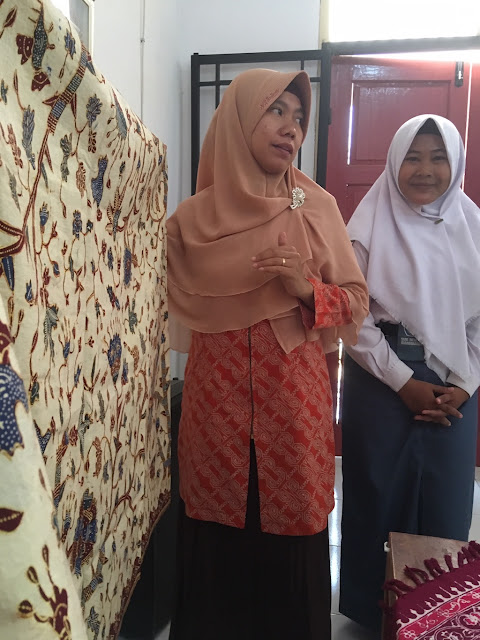 In the afternoon I was not well, probably something I eat and being tired. After a good sleep and a pharmacy of pills, I woke up a lot better. Still weak, but okay, I was happy I could say my goodbyes and thanks at the Museum before catching my train. After a short trip, only 1,5 hours, I arrived in Semarang. Pak Tubagus picked me up and first thing we did was eating at the Vegan restaurant that we went to in 2009, 10 years ago. Will be a few days in the region Semarang to exploring the history of Carolina Josephina von Franquemont. I will be filming on different locations with Denny Antyo. Until next update on my journey to Batik!  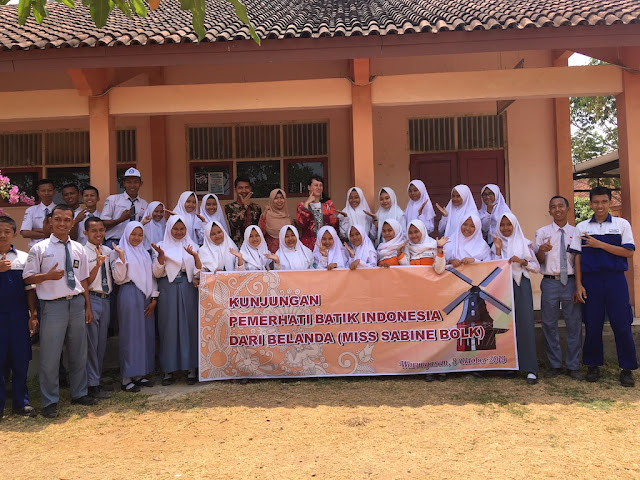