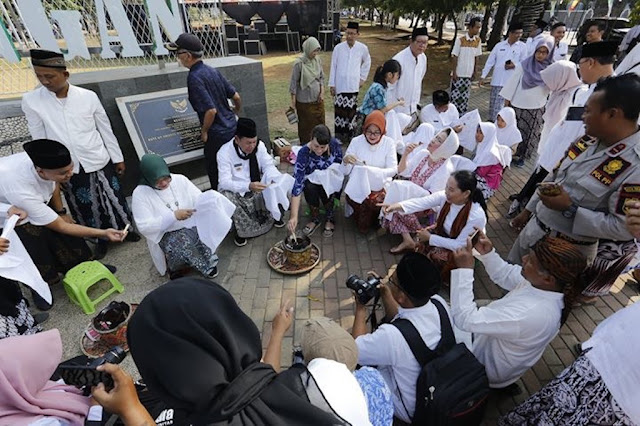 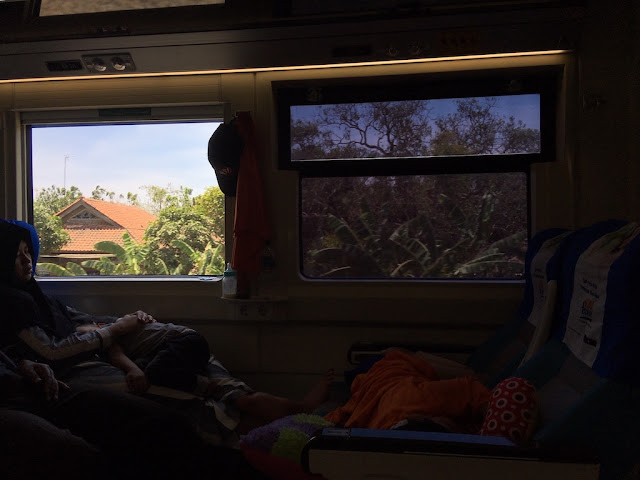 In the train
On Monday I headed towards Pekalongan. Every year they celebrate Hari Batik big and make a longer event with the name ‘Batik Weeks’. During this event all Batik communities join in, showing their products, new inventions and make a program with talks, music and much more. I was here in 2016 and joined in with making an Artwork at the Museum Batik. Because I was so busy with this, I couldn’t see much of the other activities. This year I was again invited and they made a full program for me which allows me to see much more of the program.
I arrived on Monday by train and was greeting by my friend Cornellius, here better known as Mas Dewa. That evening was already the first of many celebrations, so I got dressed up and headed to the Museum. They organized a celebration specifically and especially for the Batikmakers, they are the ones we should thank for this beautiful Heritage and Museum does so by making an evening like this.
The evening started at the monument Tugu Nol kilometer. The ‘KM. 0 Pekalongan’ marking is placed next to an old ‘Mijlpaal’, a milestone that is a left over marking from the Dutch. A Kris was carried from there to the museum with certain rituals along the way.
At the museum they had a band and two entertainers giving a show with songs & jokes. I was sitting at a table with important Batik entrepreneurs from the region, who explained everything to me, including all the snacks on the table. The evening continued with a quiz, presents donated by many companies could be won by answering questions about Hari Batik & Batik Weeks. I heard they were talking about me and got asked on stage. They had to guess me name and later I was asked on stage again and had to come up with some questions. This was received with a lot of jokes and laughs, mainly because I am a foreigner, but I was happy to oblige haha. 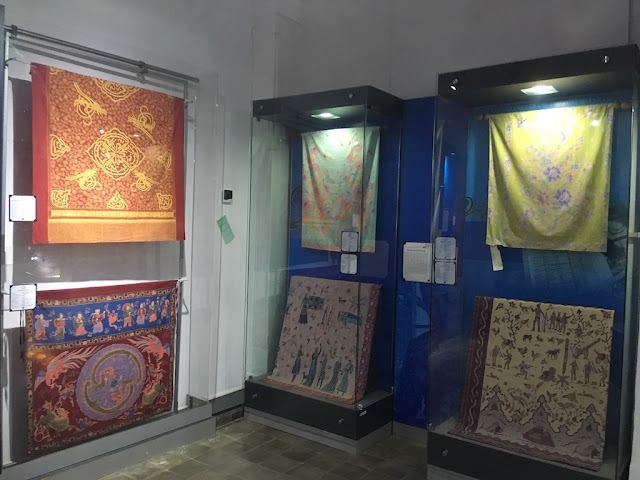 Exhibition at Museum Batik in Pekalongan 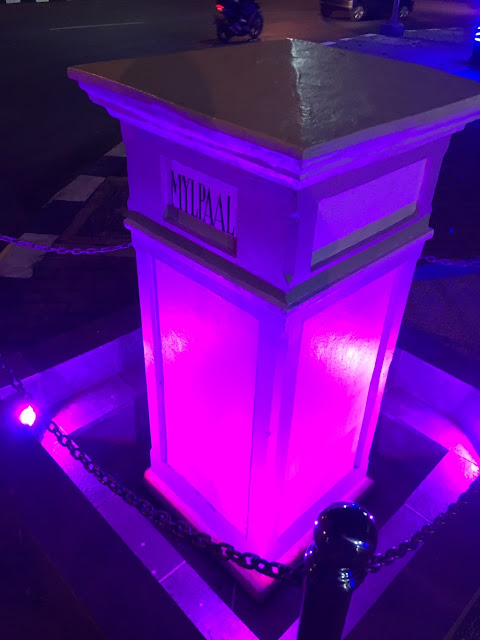 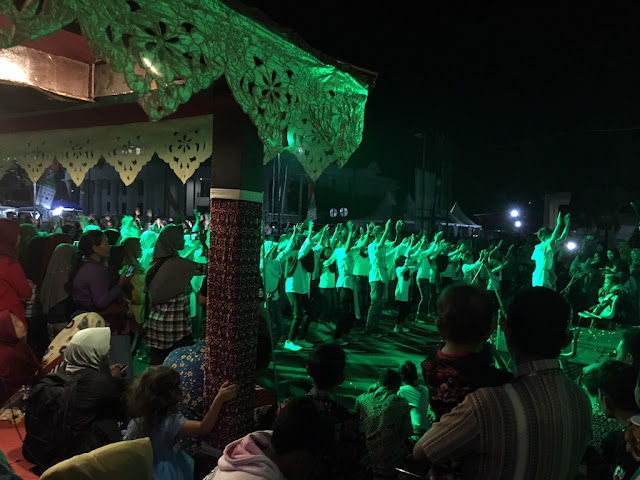 Flashmob by the batikmakers at Museum Batik
The next day Dewa asked me to join him to pick up Batikresearcher Maria Wronska-Friend. She would arrive in Semarang and it was wonderful chatting with her all the way back to Pekalongan. Her latest books is one of my favorites, ‘Javanese Batik to the world - Batik jawa bagi dunia’, in which she shows how Javanese batik inspired many other countries & textile traditions globally.
Back in Pekalongan, I went to check out the ‘Bol-Bolan Sarungan Batik’, a soccer match in sarong. Teams representing different companies competed wearing all sarongs. In this fun game they show that Batik can function in a sportive, relax way. It was so great to see all the football players like this.
After the match I met up with Ibu Asih, a teacher at the school in Batang which Batikmaker Nurul attends. Nurul asked me if I wanted to come to her school and tell a little of what I do. Her school teaches practical education, so how to make fashion including making Batik. Of course I want that, so it was great the meet the teachers already. We went for dinner at an old Dutch house which is turned into a restaurant. I invited Miss Nurul and her sister Miss Siti to join us. So great to see them again. I feel so happy I know these creative ladies that create such wonderful batiks. Thank you for coming! 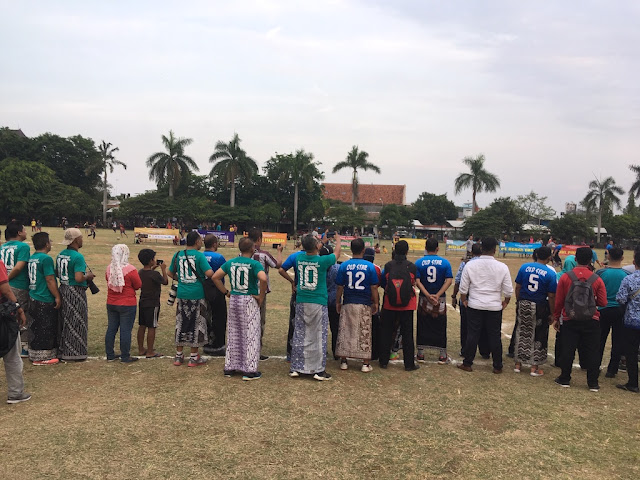 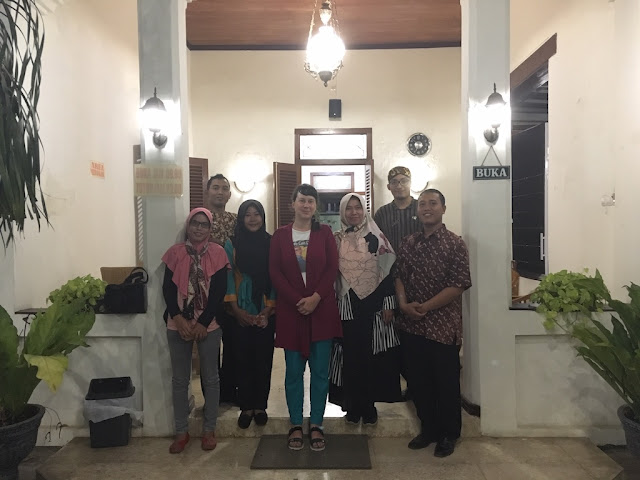 Dinner with Miss Siti, Miss Nurul and teacher Asih
The next day m, 2 October, was The Day, Hari Batik! And my birthday! To be here on the 10 year anniversary while turning 35 is a dream come true.
I got up early to attend the flag ceremony. I thought I would just be watching with most of the other museum-employee, but got placed between the people in formation. With commands being yelled we marched, saluted and try to stand in nice rows. It took about an hour before the actual ceremony started and we standing that whole time facing the Sun. I wanted to tough it out, but half way through the actual ceremony I started to get dizzy. Afraid I would pass out, I asked the man next to me how long it would last. He urged me to move to the back and sit down. Everyone was so worried and went like ‘its okay, its okay’. I watched the ceremony sitting on the sidewalk and was amazed to see that everyone after the ceremony joined in for aerobics! Wauw! 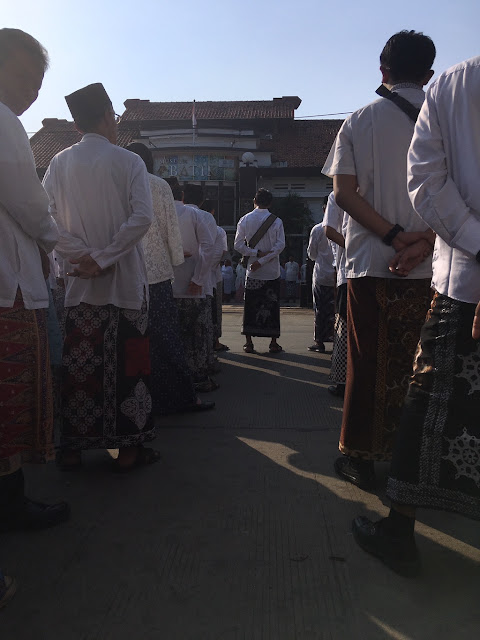 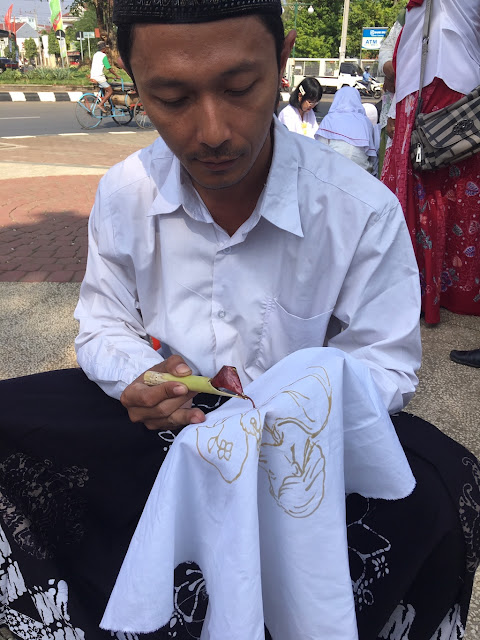 I took a minute to cool down inside before going to the next part of the program. When discussion my project with Mas Dewa before, I told him about my idea of returning Batik making to the famous ‘Heerenstraat’. This street was at the end of the 19th century the place were all important Batik entrepreneurs had their workshops, among them people like Indo-European Batik entrepreneur Elize van Zuylen & J. Jans. The idea was a little pop-up batikworkshop were people could join in. Mas Dewa realized the idea perfectly. The former ‘Heerenstraat’ starts at the ‘Mijlpaal’ I mentioned before. In front they put little stoves & stools.
To my surprise the Mayor and his wife joined in & many followed after. All was documented of course by many reporters of different local media and a huge audience. The Batik teacher of Museum Batik was sitting next to me, while I was tracing way to fast and impatiently a buketan motif, he actually made a portrait of me! He made it so beautiful and I feel so honored by this amazing gift! 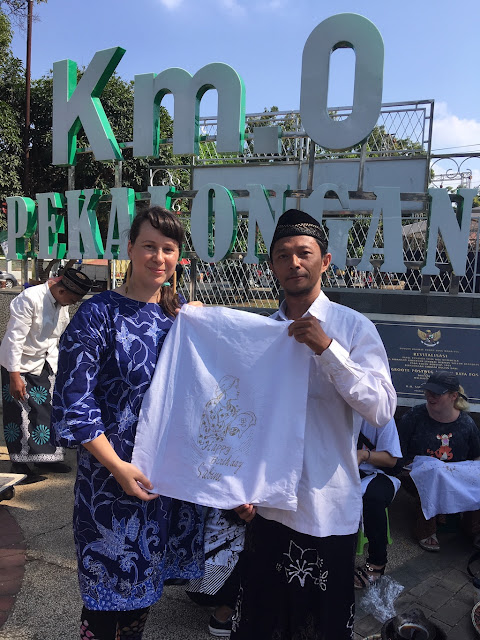 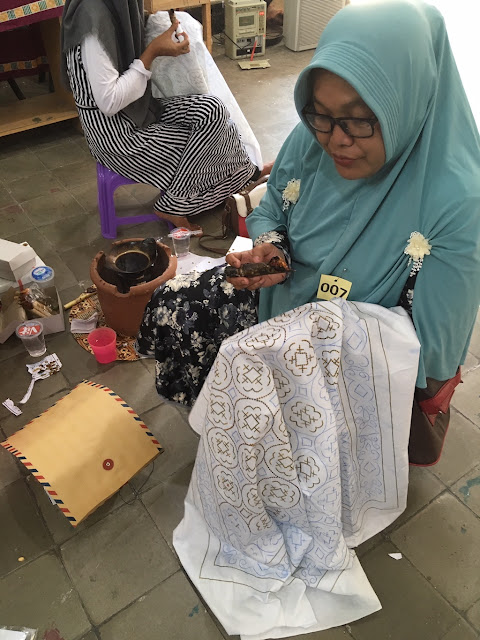 Nitik competition at Museum Batik
After the batikworkshop I went to the University of Pekalongan. A Seminar including a talk by Maria Wronska-Friend was taking place. I made it on time and it was interesting to hear the response to her talk & what was further presented.
After lunch I returned to the Museum. A competition for professional Batikmakers was taking place. They were invited to make their own version of ‘Nitik’. The ‘Nitik’ motif is probably one of the oldest in Javanese Batik, but it is hardly being made any more. The technique is extremely time consuming. It is made by creating square dots as a motif similar to woven textiles. Believed is it originated from India and was based on imported textiles. The story also goes Batik entrepreneur, and neighbor of Von Franquemont, Catherina Carolina van Oosterom was a specialist in ‘Nitik’ and in different collection pieces are attributed to her.
The makers at the museum had 5 hours to complete their designs. A jury picked in the afternoon from all the pieces 3 winners who will get a cash- price. It was nice to see that also students joined in, I happily posed with them afterward for a group-photo.
Unfortunately I missed other parts of the program, but was happy I could celebrate my birthday in such a special way!
Thank you Cornellius & Museum Batik! 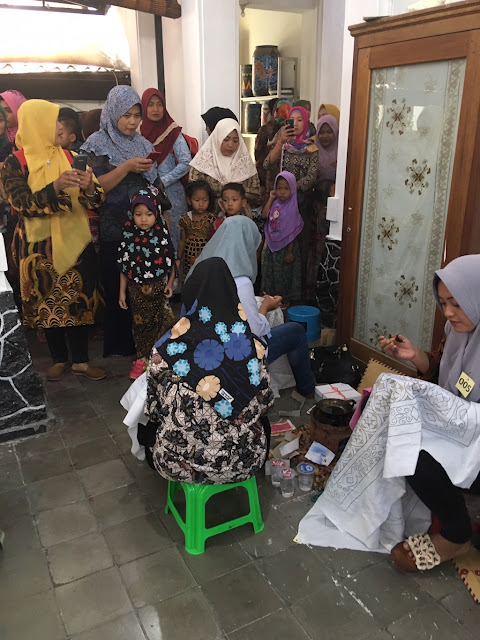 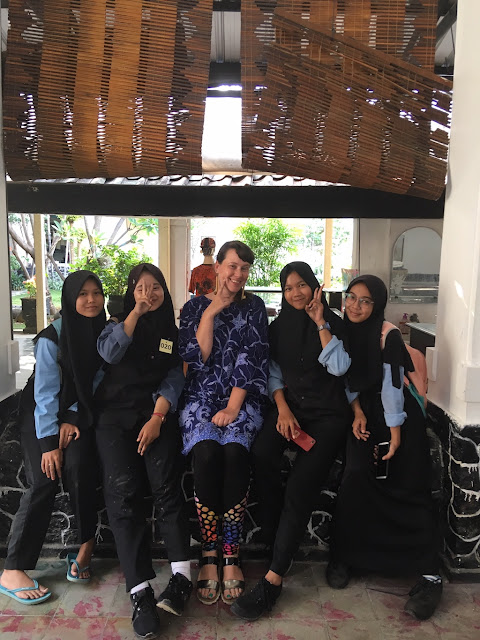 Posing with the new generation of Batikmakers, thank you for making Batik! 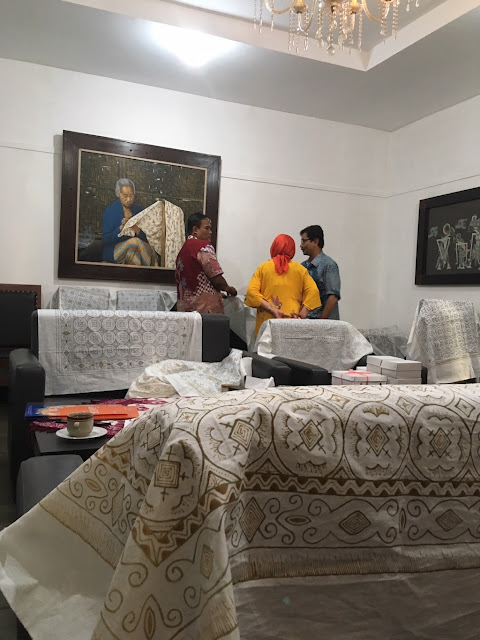