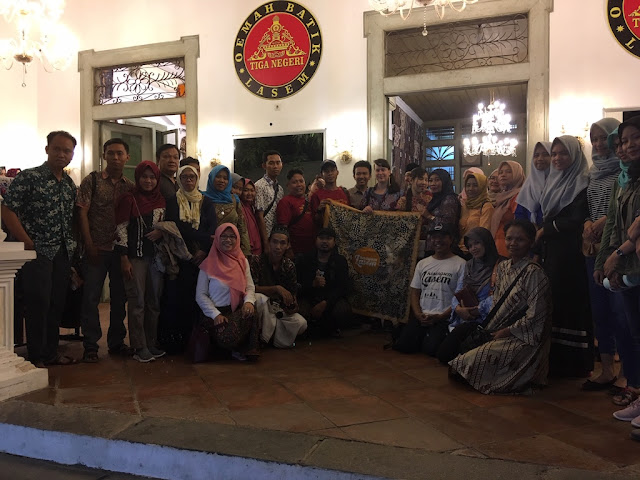 Groupphoto at Roemah Merah after my talk 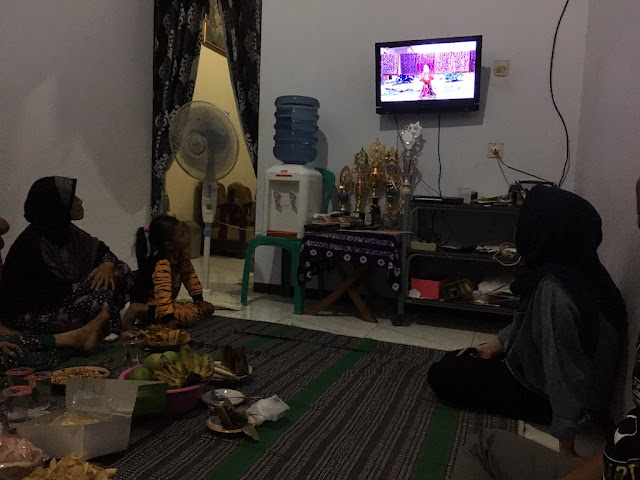 On 17 October I returned to Lasem, just like in 2016 on 17 October and in 2009 on 17 October. How I manage to arrive every time on exactly the same date is a mystery to me, but in Lasem they just say some ancestor is calling me.
From Yogya we, me, Hanif and her husband Abe, departed for the 6 hour journey. I never mind traveling here since the views are amazing and it is like watching a movie from your window.
The road brought us back to Semarang, where we passed Mount Ungaran. When we got closer to Lasem it was already dark, so I missed out on the familiar salt winning plots.
I got dropped of at my new temporary home, Rumah Oei, in Lasem. A classic Peranakan house, turned into a café, guesthouse and museum. My room, Rama Shinta, has the biggest bed I ever saw. An old four-poster bed with beautiful decorations on it, it make me feel like a princess. 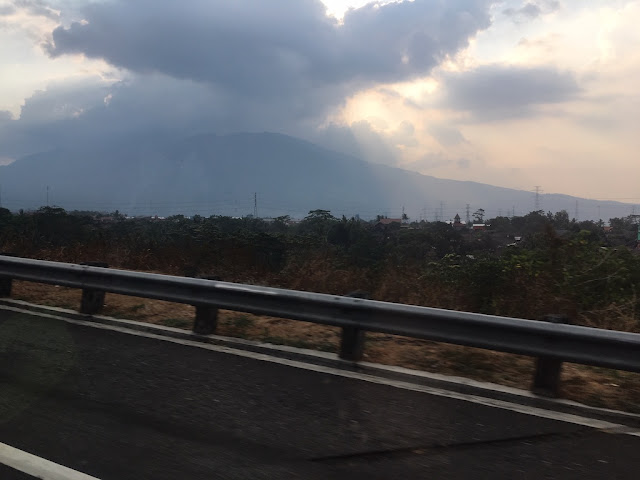 Mount Ungaran from the car 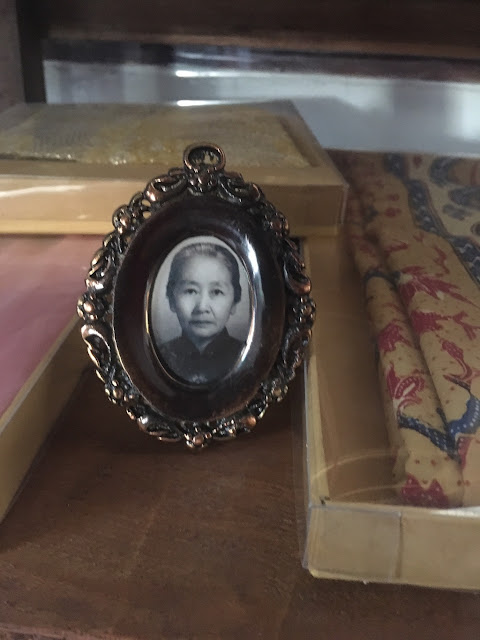 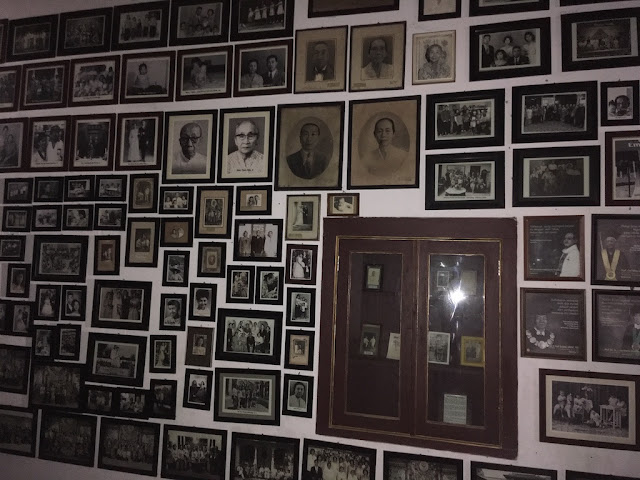 The next morning I got breakfast at the restaurant for guesthouse-guests with a view on the huge mango tree that dropped fruit every 5 minutes or so and a bird signing in its cage.
They opened up the little museum, and I was so amazed. The collection of the family Oei is on display there. They had multiple businesses and even made Batik. My favorite display was a showcase filled with sarong and kebaya in boxes, little portraits of the women it belong to stand between the boxes. Also the wall with the family photos was impressive. It covered the wall completely. I love this tradition of hanging your family-tree literally in photos on the wall! 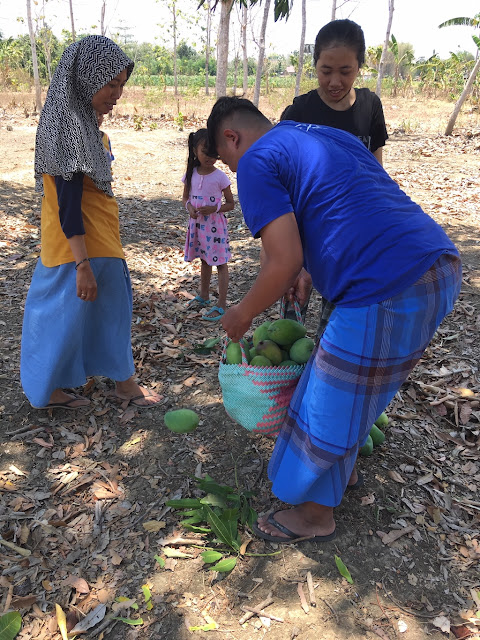 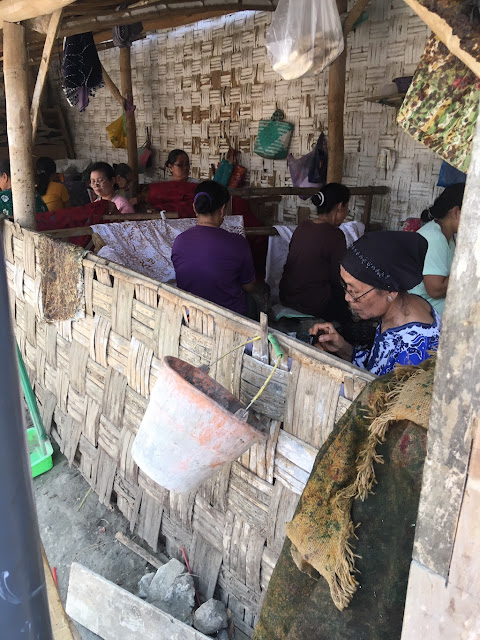 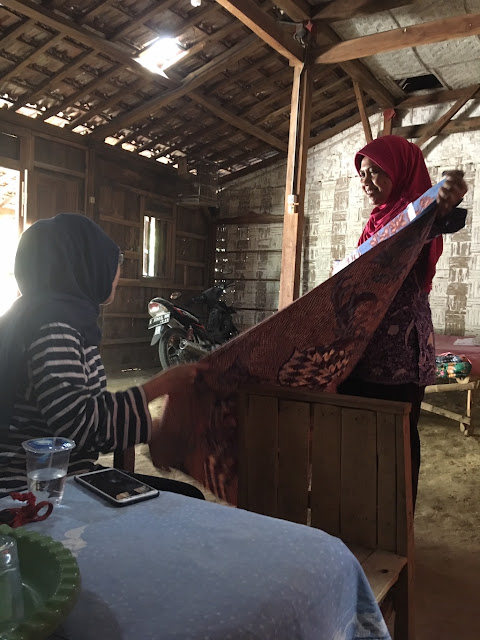 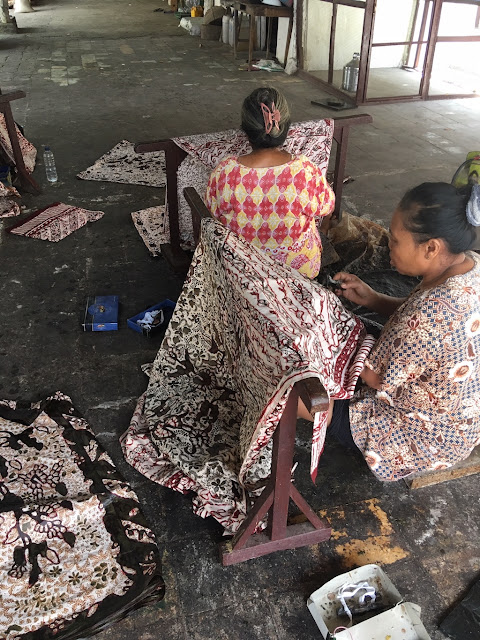 After the museum visit, I took a Grab to the batikworkshop Gading Kencana, run by Ibu Maryati, Hanif’s mother. It was great to see the landscape from the back of a motorcycle, but it also worries me how dry everything is.
Arriving at Ibu Maryati, I was asked to go to the back, because they were harvesting Mangos. First thing I did was eating a Mango, but I was also already fancy dressed for my talk that evening.
After seeing the batikmakers and picking out batiks to buy, I headed to Ibu Ramini. Her Batikworkshop KUB Srikandi is were my ‘journey to Batik’ really began. I was so happy to see her again and loved that she right away had tailor questions for Hanif, {Hanif makes fashion from Batik and specialized in Sarong and kebaya}. Ibu Ramini invited me to come the next day to her batik-class and she promised to attend my talk later that day.
Next stop, Pak Sigit’s workshop ‘Sekar Kencana.’ . At first they didn’t want to let us in, and when we got in, the Batiks with Mr. Sigit signature were not available. The son in law asked us to return the next day, he hoped he could show us the pieces then. 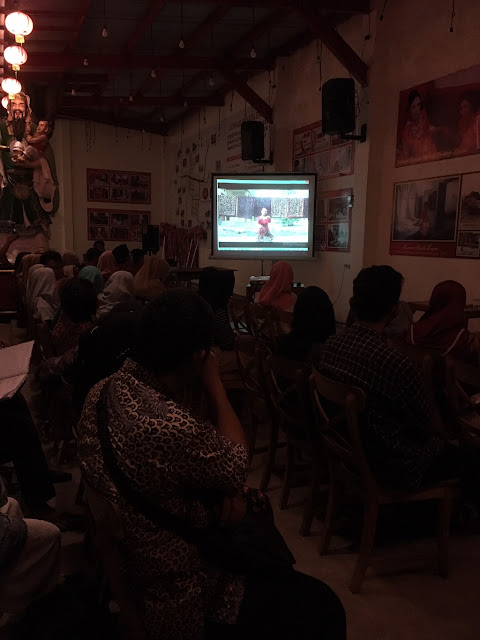 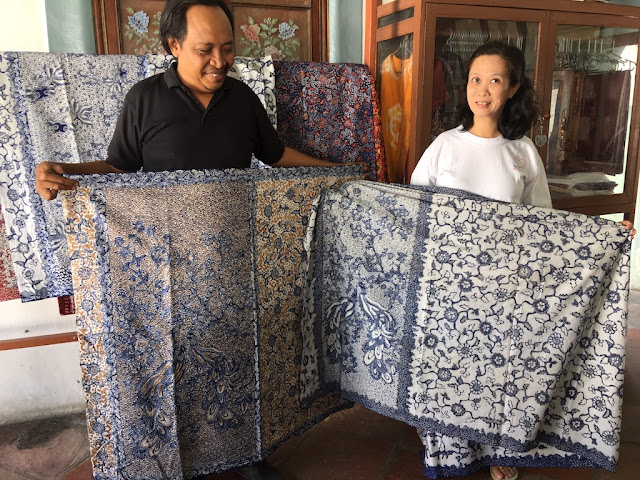 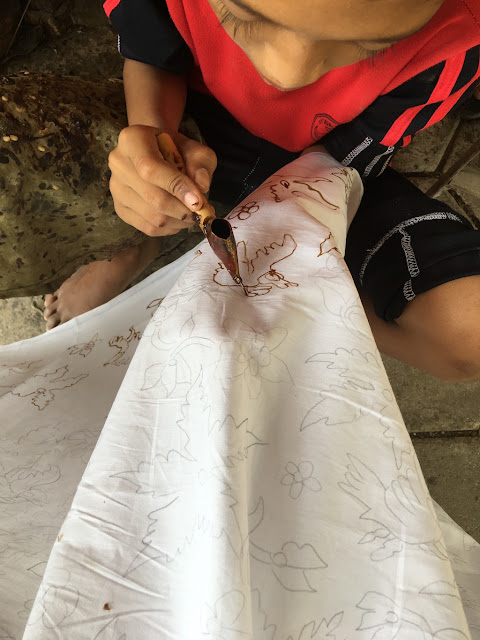 In the evening was my presentation at Roemah Merah. Only a two minutes walk from Roemah Oei. I got invited by Bodhi Pop, or Mister Popular, from the Lasem Heritage Foundation. I didn’t know this group before, only online, and was amazed finding a huge community dedicated to protecting and promoting Lasem culture and heritage. Rumah Merah is a huge complex, actually consist of two Peranakan homes. They are building a ‘Tiga Negeri’ Museum that hopefully opens beginning of next year, super exciting! And they have beautiful guest-rooms also.
The foundation give tours and organize events to inspire a new generation to enjoy Lasem rich culture. I felt honoured I could share my journey here.
At the entrance they prepared for my talk and I think 30 people or more showed up, including Ibu Ramini and Ibu Maryati. Even two people drove all the way from Kudus! I heard later that no researcher actually ever come share their story in Lasem, so it is a rare occasion. I was so surprised to hear this, many Batik-researchers include Lasem in their studies & books, why not present it here then? For me it felt very logical to share my story here, a wish of mine to screen my film, so happy I got this stage.
I started with screening my film and after that gave my talk on my current research-project. My translator had a very hard time, being very nervous and not finding the words, but in general my talk came across well, I hope.
After my talk there were many questions from the audience. It was very interesting again. A batik entrepreneur replied that many of the motif attributed to Von Franquemont are still being made in her workshop now. She asked if the meaning of these motifs were known since most meanings of patterns are lost today. At the time my translator didn’t make this clear and later Abe explained it to me. I think it would be really great if we can trace back old stories about these motifs and return them to Lasem. Most motifs are based on old Chinese tales and sayings, so there must be ways of finding it out. I hope I can meet her again when I return here next time and share ideas on this.
After a very long photoshoot, groupphoto/selfie/together with me, the night came to an end. It was such a warm response and I was so happy I got the chance to share my story here with this amazing audience! Thank you Mr. Pop and the Lasem Heritage Foundation!

The next morning, Mr. Pop was already waiting for me a quarter before 8. Nobody here is early, but he works with foreigners a lot, so I still needed to dry my hair and have breakfast. We headed to the Batikworkshop Lumintu, also just around the corner. A bright blue entrance hide away an amazing Peranakan house. The owner Ibu Eka is third generation of batik entrepreneur, however her parents didn’t run a workshop, but her grandparents did. She returned 4 years ago back to Lasem to take care of her mother and started up the batikworkshop. Not many old pieces got passed on, but Pak Hartono’s book ‘Batik Pesisir turned out to be a welcome source for inspiration.
Lumintu is specialized in high quality Tiga Negeri. Beautiful, but a bit above my price range at the moment. Ibu Eka showed two unfinished pieces, both in blue. One had almost the same kepala as Eliza von Zuylen once made. I needed to have it & was happy Ibu Eka allowed me to buy it!
After this short visit, I headed to Ibu Ramini. There her batikclass was in full progress. Every week a different class of the same local school, SDN Jeruk Kec. Pencur, gets a class in making Batik on Saturdays. At least 25 children were there this day and most ran out to great me with a hand shake {they take your hand and put it on their forehead or nose}. The class was copying their design onto cloth and the one finished with this started the batik making. It was so wonderful to be at this class, I admire Ibu Ramini greatly for putting so much effort in inspiring a new generation of Batikmakers. She explained that from all students, maybe 2 will became batikmakers. So only 2 precent...!
I just sit there, watched and filmed. So great to return here after 3 years. One day I just want to be here and join the batikmakers and learn from Ibu Ramini! For now this afternoon had to do. 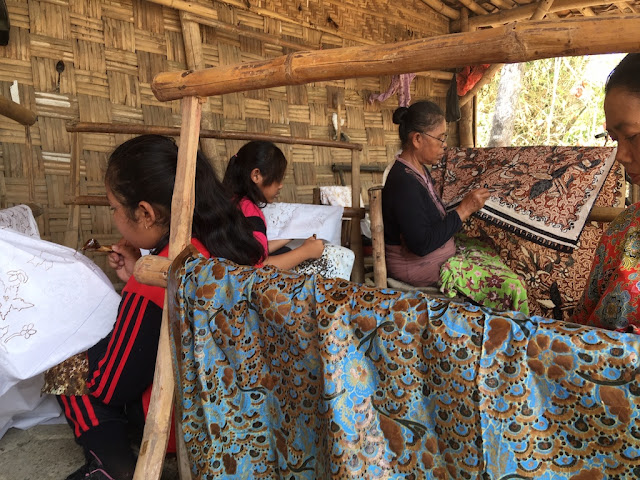 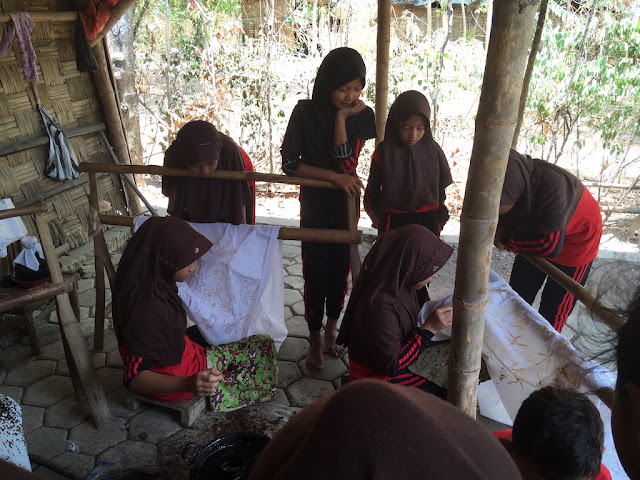 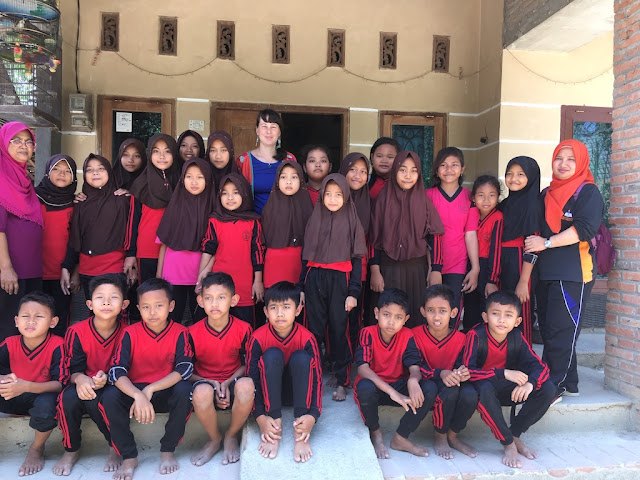 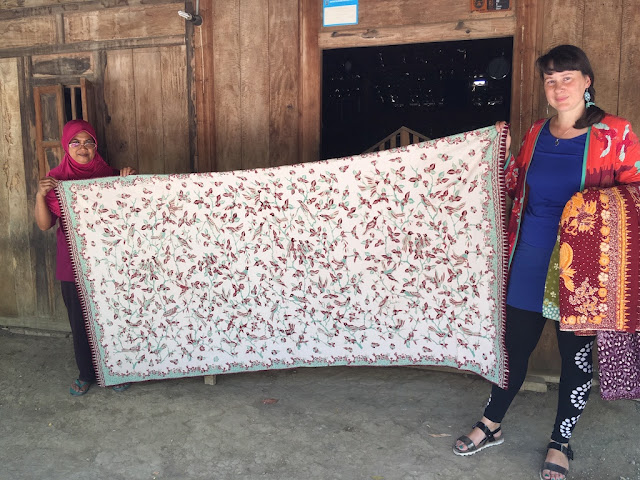 Me and Ibu Ramini showing one of her beautiful designs

That evening I would share my film one last time on Java. Back to where it started, and back to where I filmed Miss Dwi perform her Tari Batik. Of course the screening was on the same date as I filmed her in 2016 - ancestors must be guiding my way, I have no way of explaining this. So full circle in every way!
Before the screening we went to the beach. I never was there before and it is so beautiful. Me and Ibu Maryati drank a coconut and shared smiles. It was so nice and I feel it is my batikfamily.
At the home we waiting for the batikmakers to arrive. Many snacks were served and when everyone got there, I gave an intro that got translated by Abe and Hanif. Everyone watched the movie full focus. Ibu Maryati asked which makers and where, and everyone enjoyed watching the others. At the end everyone laughed so hard - not like normally because a man is riding through my shot, but because they know this man, hahaha.
The screening was really the cherry on top this journey - Thank you Hanif for helping, thank you Abe for everything, thank you Ibu Maryati fir welcoming me and hosting the screening and special thanks to Miss Dwi, thank you for being part of my journey to Batik! 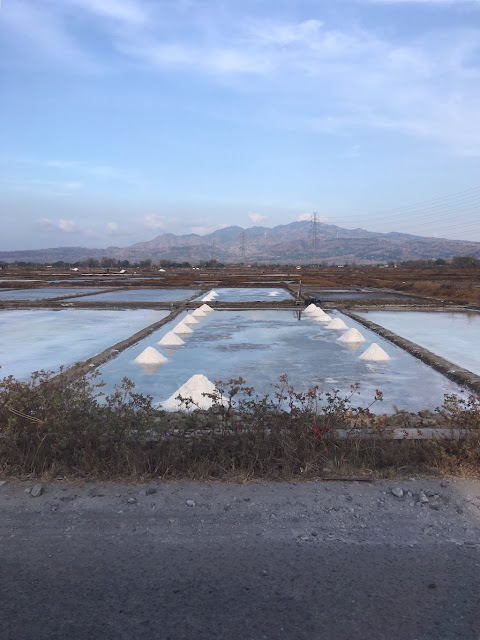 Salt winning near the sea 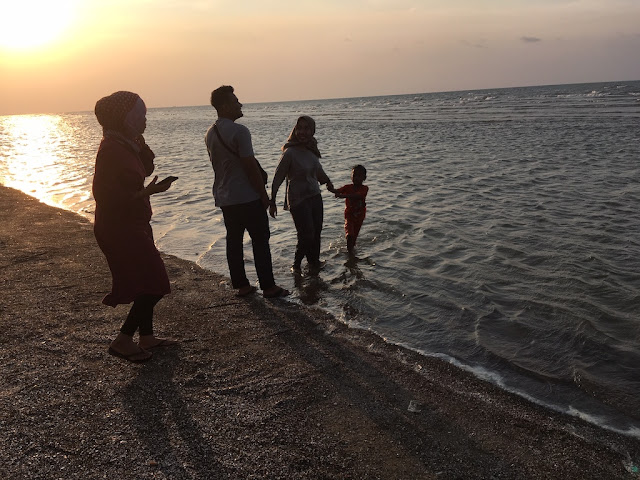 With my batikfamily at the beach 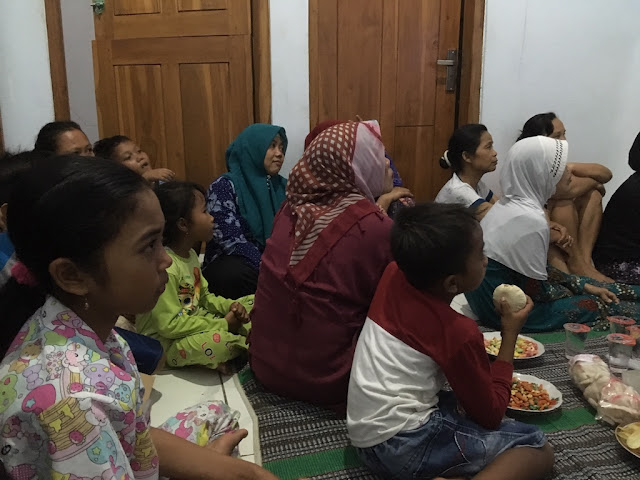 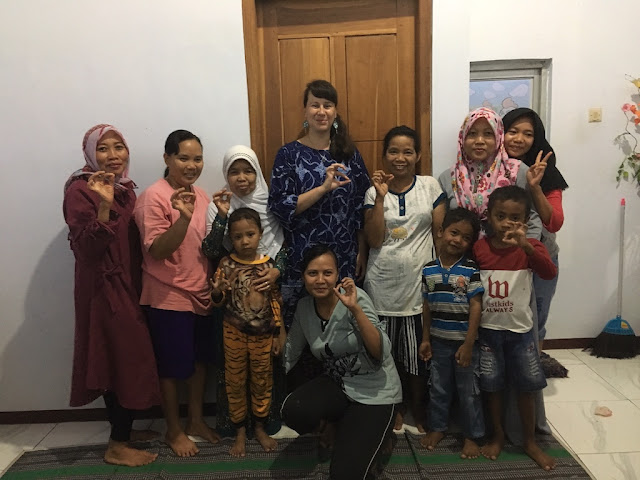 Together with the batikmakers of Gading Kencana

The next day we had to leave again. At Ibu Maryati’s house I could still watch the pelorodan, the boiling out the wax. Her husband and two of the makers were boiling out the newly made batiks. A nice ending of this visit.
This time was really too short, but even if it was too short, I was so happy to return there.
Lets wish till next 17 October! 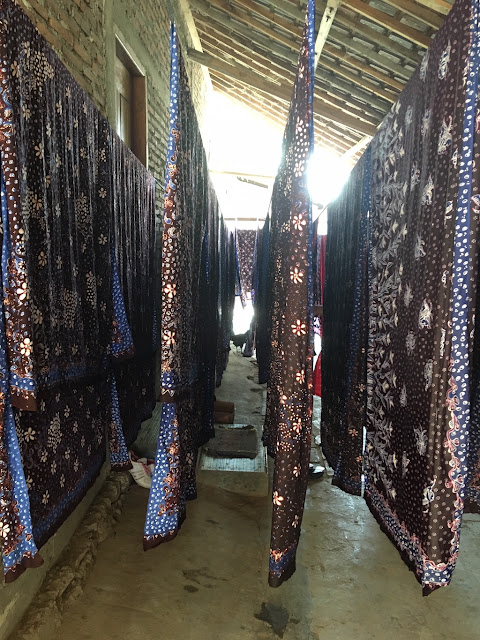 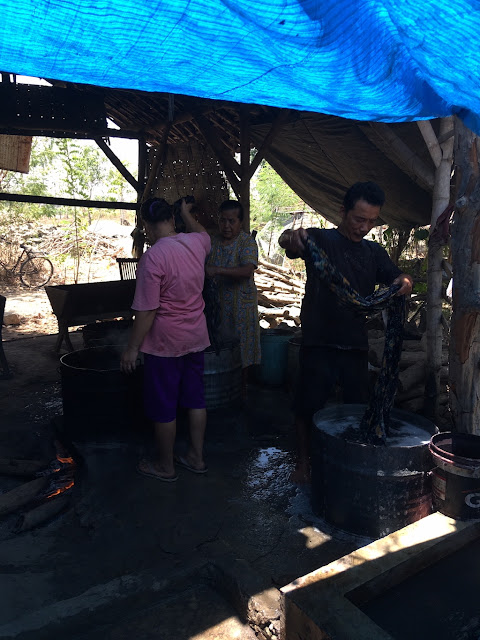 Boiling out the wax


*So my report on Lasem got delayed, just like me journey. On my last night on Java, in Jakarta, I eat something my body didn’t approve of and got really sick right away. I had to go to the hospital the next morning and missed my flight to Bangkok. I was literally grounded and I could only continued my journey on Thursday {typing this while getting ready to leave Jakarta}.

** Happy to inform I went to Bangkok on Thursday 24 October, writing this will boarding my plane