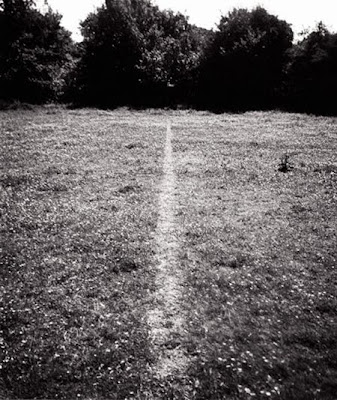 "If you came across this circle (Wood Circle) in a forest, you will know: Someone was here, this temporary structuring is the evidence of it."- Annabel Kuperus

I ordered the book "WOW" a few weeks ago. The proceeds went directly to the "Save an artwork" project. How is it possible to save an artwork AND get a very nice publication is beyond me, but I'm very happy with it.
In the book different people tell what they see, feel and think about the Wood Circle and why it's so important that it had to be saved. Fortunately they saved it, so you can enjoy the real deal at the Van Abbemuseum in Eindhoven.

Olav Fakkeldij tells about another work by Richard Long, "A ten mile walk" (1968). This early work by Long is a walk in a straight line through meadows, over hedges and walls, through the forest and swampy grassland of Exmoor, England. Apparently the walk is very surrealistic, while climbing over a hedge, following the route, you'll see a gate just a few meters away. Halfway the walk the line exactly follows a primitive dam. It has to be planned like that otherwise you had to walk through a lake, so it's not just a straight line put on a map. 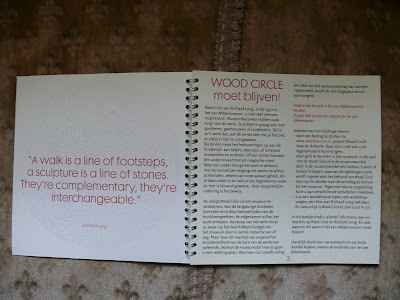 Richard's way of changing nature (by using what is already there), leaving a mark, making a route. A path, a walk, which you can follow and get closer to the artist, reminded me of the works I saw at the Museum of contemporary Aboriginal art (AAMU) in Utrecht. AAMU focus on modern Aboriginal Art. By supporting local artists in making permanent work, they keep their heritage alive for the next generation. The traditional Aboriginal Art was mostly very temporary and it wasn't preserved. 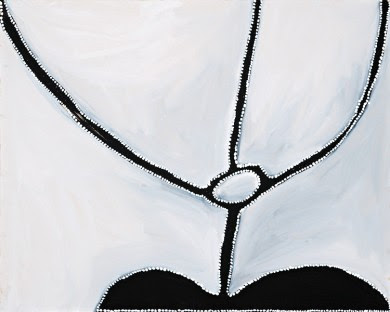 In 1971–1972, art teacher Geoffrey Bardon encouraged Aboriginal people in Papunya, north west of Alice Springs to put their Dreamings onto canvas. These stories had previously been drawn on the desert sand, and were now given a more permanent form. The dots were used to cover secret-sacred ceremonies. The well-known dot paintings are actually a kind of maps. The Dreaming dot paintings stand for the "timeless time" of formative creation and perpetual creating. While creating the paintings they enter the dreamtime and let their hands "write" down what the ancestors tell them.

What the painting mean is not for us to know, but research showed that some of the paintings are actually maps. The paintings give a top/bird view of the landscape. Looking at the paintings with this in mind you can see how some dots create a river and maybe the other one is a line you should follow to get safely to the other side.

The works mentioned above are both very interesting paths to follow!

More about Richard Long on www.richardlong.org
More about AAMU on www.aamu.nl