A quest in Delft part II 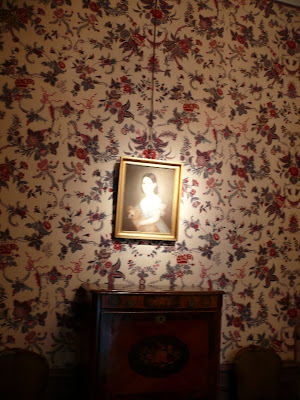 I promised to find out more about how Delftware influenced Batik Belanda (see blogpost "Batik Buketan") and how our Delftware got influenced by the Chinese porcelain (see blogpost "A quest in Delft"). I haven't really found out much, only made a lot pictures of porcelain from Paul Tétar van Elven's collection. One thing I do know, I have to get me one of those porcelain sets myself. What a beautiful images are created on a plate. I can't imagine eating from it. They all tell little stories, which is similiar in Batik. But much more figurative and more like a comic almost.

Before telling more about the documented porcelain, I start with the scenery there placed in. The Paul Tétar van Elven Museum was once the home of the 19th century Academy painter and art collector Paul Tétar van Elven (1823 - 1869). Finding alternative places where Delftware is on display, this sounded as one of them. Next to the collection of his work: historic pieces, portraits and copies of the Old Masters, he had a large collection of oriental and Delft pottery.
The rooms of the house are decorated in the styles of the 17th, 18th and 19th centuries. The museum boasts one of the top 100 best preserved interiors in the Netherlands. Some parts of the interior are authentic and some parts, like the wallpaper, are specially designed for this museum. 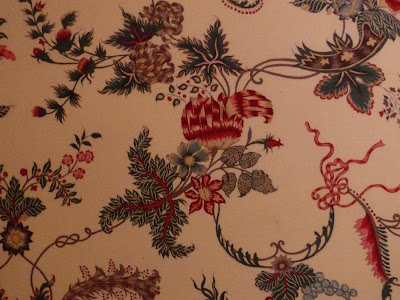 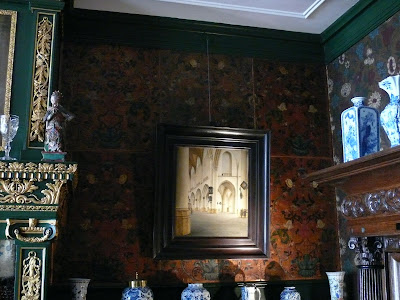 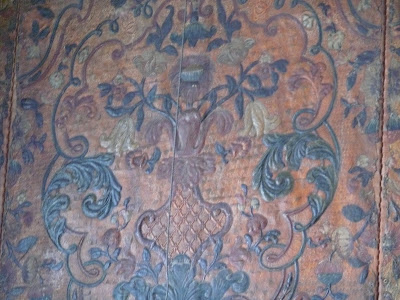 This gold-gilded leather is a wall decoration made of tanned leather (calfskin),pasted with silver leaf and covered with a golden-colored varnish.
When in 1628 a Dutch gold-gilded leather maker got a patent on making relief into the leather, new designs got popular like floral motifs, birds and cherub figures.
The same development happens in the Hindelooper motif, but much later according to my research I did so far.
In "Volkskunst der Lage Landen" the Hindelooper designs got more bold and filled with floral motifs, birds and cherub figures in the 18th century.
They believe that the Hindelooper folk art got influenced by the presents of the Dutch East India Company, more about that in my previous blogpost "Checkmate".
The funny thing is that the Dutch gold-gilded leather was transported to China and Japan. Maybe it was adapted to their preferences or maybe it was already based on asian motifs, I do not know.
In the 18th century, the much cheaper, wall decorations on fabric made it difficult for the gold-gilded leather industry to compete. The same is happing in Indonesia with Batik at the moment. Cheaper, printed imitation Batiks from China are taking over the market. It's difficult for Batikworkshops to compete, because the hand-made fabrics are much more expensive to make and therefore more expensive to buy. 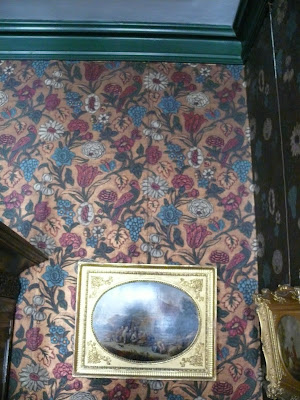 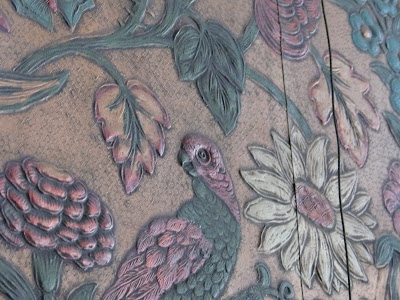 Imitation gold-gilded leather made from paper from the 19th century 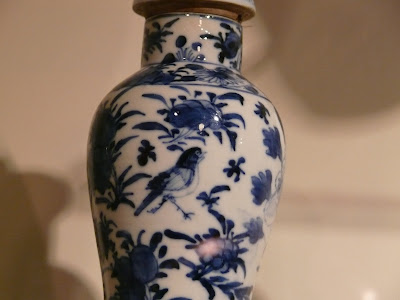 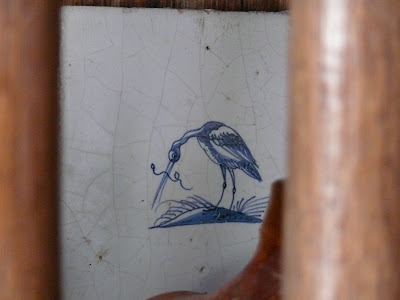 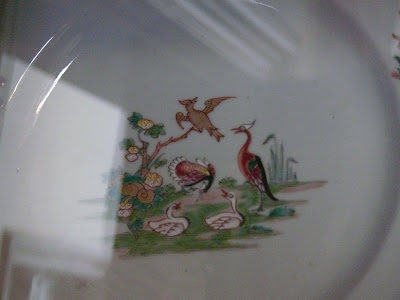 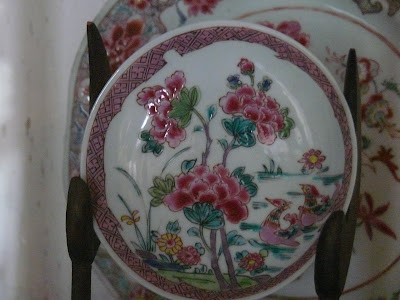 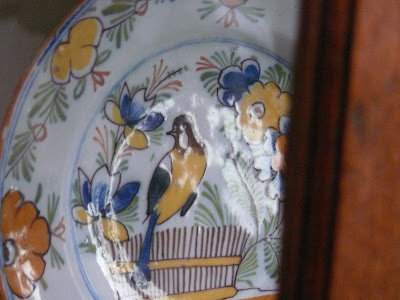 The most interesting objects in the museum where in a cabinet on the first floor. These object weren't documented or studied, because there were "less interesting historically and of less quality". That figures, I go "ooh" and "aah' and the "experts" didn't even bother. The museum is run by volunteers and they are very kind and happy to give information. The volunteer couldn't tell me much about it, but she believed that most of the porcelain in the cabinet was "Amsterdams bont" and was used to eat from, instead of showing them of in a cabinet.

"Amsterdams bont" is porcelain imported from China and then (re)painted in Amsterdam. Also blue-white porcelain was repainted with a additional decoration. It was more expensive to do this in China, so they made it in amsterdam. The images are similar to the ones on the Chinese porcelain. "Amsterdams bont" is easily recognizable due to the second thicker layer of paint.

I like this "Amsterdams bont", because it has a childlikeness way of painting to it. The "experts" call it "lack of quality" I think, but I think it's now very interesting how and why they changed the authentic porcelain into a bolder, not coloring within the lines, Dutch porcelain. The bird on the plate above transformed into a Great Tit. They have this bird in China (I think), but I find it unlikely that they used him instate of some exotic bird to paint on to a plate. And here the Great Tit is one of the most exotic, in both character and color, birds we have. 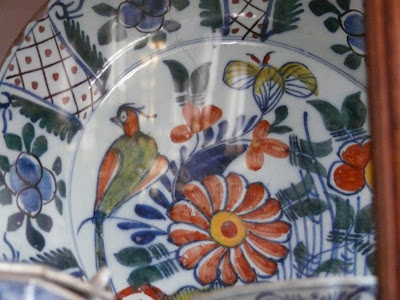 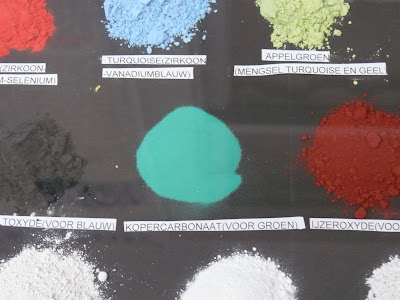 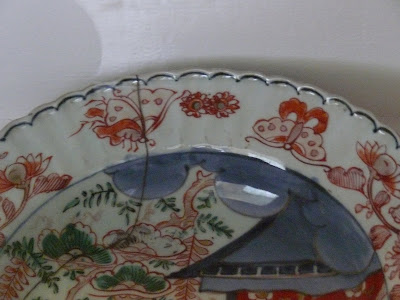 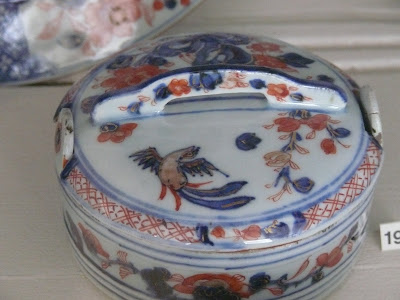 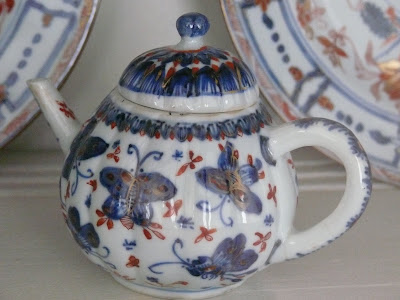 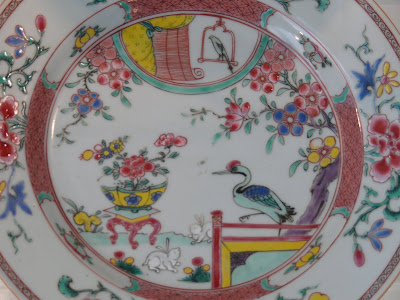 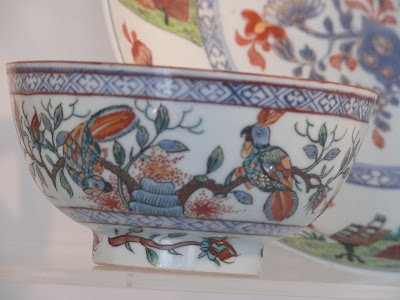 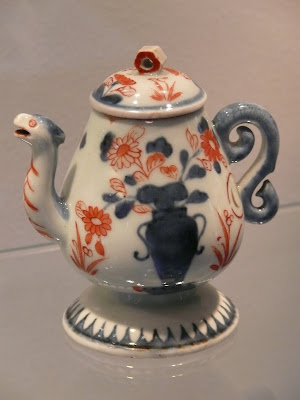 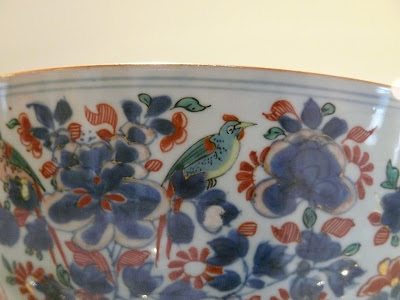 Because I can't tell the difference between Japanese and Chinese Imari and worse the "experts" also can't tell the difference, the pictures with only "Imari" are from China or Japan.
The Imari history is a bit difficult. Who copied from who and why, started again with the Dutch East India Company. They bought porcelain from China and Japan, and of course where business is done, the best price wins. So Japan and China competed to sell their porcelain.

"We do not know what Paul Tétar van Elven thought about the colonies and other cultures. He properly saw the situation mainly from a commercial perspective. A woodprint from 1857 shows a parade in the streets of Delft of foreign students playing Gamelan. He was aware of the Indonesian culture, but he probably preferred Beethoven."
-freely translated from a review about an exhibition at the Paul Tétar van elven Museum


Trying to find out more about Batik, our folk art, different traditions, I can't avoid a certain subject no longer. We, Dutch people, got pretty good at it. This time of year when "Sinterklaas" and his Black Piets are running around the streets, it's not a popular subject, but also a very popular one: Our history and what we did with it. Most of it is based on ego, and never anything good can come from actions based on ego. Reading and trying to read around it everything comes back to the same starting point, the same base, the one thing we share. The Dutch East India Company (Dutch: "Vereenigde Oost-Indische Compagnie, VOC").
At Secondary School, HAVO, I graduated with the profile Culture and Society, also known as the fun package. In my fun package was geography, history, art and art history. Our history exam was about the Dutch East Indies. I didn't liked how it was taught to us. Our Golden Age, our fame and glory, all the ego, wanting more, wanting what wasn't ours to begin with. I thought it was very black and white. It was about the profit and never about the loss. If mankind had a more exploring nature then one that wants to conquer, our history would have looked a lot different.
But it doesn't, and we can keep trying to ignore it. We can't keep saying how the traditions we have, the things we make, the (folk)art are all genuine. Trying to hide our past, trying to avoid the subject. Feeling ashamed about it, putting history in a one sided light.
I don't really know a lot about the VOC time and I'm connecting the dots from my point of view. So if I'm historically wrong, or just wrong, please don't hesitate to correct me or help me with more information. I have to learn more about this part of my history. The things on my path, Batik Belanda, Delftware, Hindeloopen, and I even think the flowercarpets, have this history in common. It changed it, it created it, it blossomed from it. People did terrible things and on the other hand people created beautiful things. Somehow and most of the times these two are connected and the arteologist inside of me has to discover what those connections are.

I am with you on the painted ceramics, I actually really like them. They may not be as accomplished as some work from that period, but that is there charm. High accomplishment can sometimes appear sterile and dull and often looking as if a human hand has never touched it.

Hey John, thanks for reading!
I tried to paint some porcelain myself and it's quite difficult, but I keep trying. I totally agree to the hand-made feel to it. I like to see that its handmade and sometimes when its a bit off, it's stronger, more real.