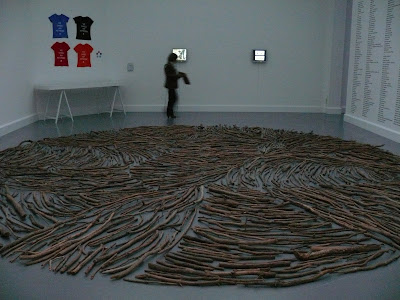 "Wood Circle" by Richard Long at the Van Abbemuseum in Eindhoven

Wednesday I visited GLOW in Eindhoven with my mother. Because I still hadn't see the real "Wood Circle", I told my mother that if we were on time we should visit the Van Abbemuseum. I was convinced we wouldn't make it, but my mom is very determined. So four minutes before closing time we entered the museum and could still see the "Wood Circle".
I'm happy to say it's a beautiful, strong work. It's a bit crowded, I think the work needs more space. And seeing photos of the work in the woods, it feels a bit artificial indoors. But never the less; the flow, the feel and the mark he leaves is very strong, even indoors. 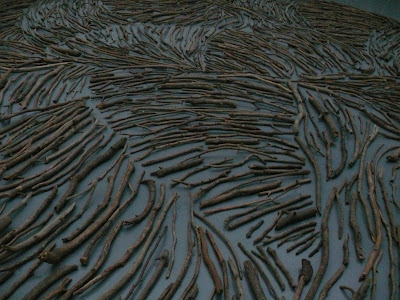 GLOW, International Forum of Light in Art and Architecture. This year was already the 6th edition with the theme ‘Illusion and reality’. The city center of Eindhoven turns into a forum of interventions, installations, performances and events based on the phenomena of artificial light.
We walked around the TU area and saw some nice strong projections and installations. We were walking back to the station when this work by "We make carpets" caught my eye. 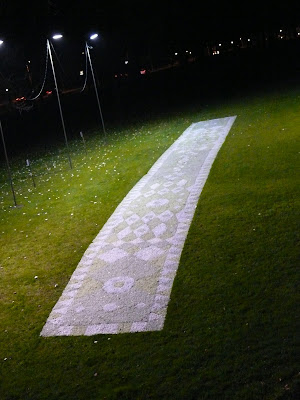 "Glow carpet" by We make carpets at GLOW in Eindhoven 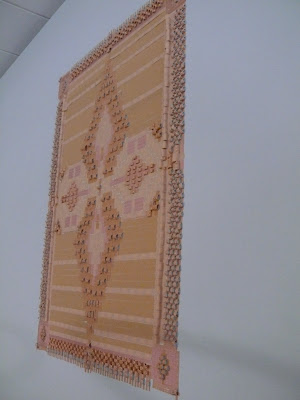 Band-aid carpet at BKKC in Tilburg till 12 January 2012

For GLOW they used "glow in the dark" pebbles. At first I felt they could be competition for my work. It's a nice carpet, but also plain. Their designs are very graphical and they base their pattern on the material. This makes the shapes you can make limited. I wouldn't use a material that determines the pattern. With rice, lentils, beans, but also leaves, nuts, sunflower seeds and corn, I'm free to draw and create the pattern I had in mind. But on the other hand I wouldn't mind being challenged by using a man-made-mass product for a temporary carpet.

I've never really thought of temporary carpets before, but a fascinating subject and just thinking of materials to use, there seems no end to possibilities.

Hey John, as you might already know I make ricecarpets myself (http://www.sabinebolk.nl/search/label/rijsttapijten).
I was always fascinated by temporary art and somehow most of these works are carpets or works on the ground/floor. Also in traditional (folk) art and rituals you see a lot of temporary carpets. They are made from rice, salt, flowers, things like that. It more sacrificial and the used material is or their common food and/or what they cultivate. It's an interesting subject and I have a lot more carpets (and traditions) to share, so keep reading ;)