What kind of Boerenbont are you? 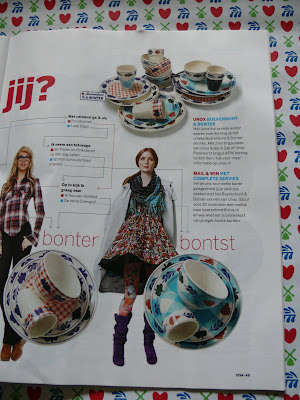 Article "Hoe bont ben jij?"/ "What kind of Boerenbont are you?" in the Viva, background wrappingpaper made bij Lief!


To start with, I helped save an artwork. A little bit of it at least. The Wood Circle by Richard Long is going to stay at the Van Abbemuseum in eindhoven. More about that in a later post.

Reading the Viva (Dutch magazine for grownup girls) I came across this quiz "What kind of Boerenbont are you?". Boerenbont is definitely a candidate for a Tradional Dutch blogpost. So here it is.

"Boerenbont is a traditional pattern used on pottery from the Netherlands. Translated from Dutch, "Boer" means farmer and "bont" refers to a mixture of colors. The distinctive floral pattern is hand-painted with simple brush strokes of red, yellow, green, and blue. Currently manufactured by Royal Boch in Belgium, the pattern originated as a local craft made by farmers’ wives in the 19th century. According to the Royal Boch website, a variety of patterns have followed the path of Dutch merchants all over the world, from Sumatra to Zanzibar via Goa. It remains a popular pattern today."
-From Wikipedia

A new Boerenbont collection* is now on the market. Its based on the traditional pattern. One style is a simplified pattern with only blue & white (original the Boerenbont pattern is blue, red and green on white). One with a red Gingham pattern as a base. The name Gingham originates from an adjective in the Malay language (the language which forms the basis of standard Indonesian and Malaysian) ging-gang or genggang , meaning striped. When originally imported into Europe in the 17th century it was a striped fabric, though now it is distinguished by its checkered pattern. And the last one, the "bontste" (pied/most colourful/bold) is with a aquacolour blue checkered pattern and over it the orginal Boerrenbont pattern.

Following the steps of the quiz with multiple choice questions like "Is there a floral pattern jumpsuit on your wishlist?" (Hell Yeah, for a year now :)) and "With Carnival I go dressed as?" (I was Lady Gaga this year, so CHECK), "I get a tattoo..? " (I have one and I'm saving for one, so next question), I ended in only 4 steps at "Bontst". No surprise there. 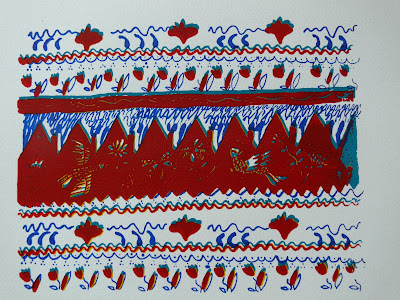 In 2009 I made a screenprintseries based on Delftware & Batikpatterns. "In Holland Stands a House"** (title of a Dutch children song) also has the Boerenbont pattern in it. The concept of the print is that every house in Holland (Holland is the Dutch part above the rivers, North & South Holland) has some Indonesian history in it. A history in roots or a colonial past.

Because I don't believe in coincidence, I think I put this one in my synchronicity list. Now that Boerenbont is new and improved they added the Ginggam pattern. I find out that the Gingham pattern is brought to Europe in the 17th century. That the word Ginggam is based on ging-gang, or genggang, which means "striped" in the Malay language spoken in places such as Malaysia and Indonesia, where it is believed to have originated.
In "In Holland Stands A House"** I used the pattern combined with Batik to show our shared history. And now I know that we have a shared pattern, it's only a checkered one, but still very interesting. 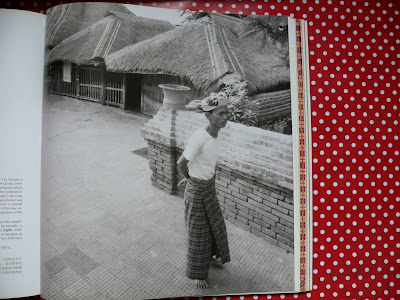 Man attending Friday prayers at mosque, page from the book Batik, creating an identity, on the background Lief! wrappingpaper