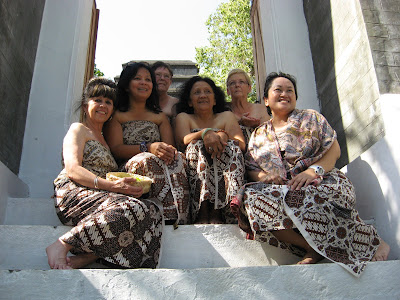 Received this beautiful 'Batik Statement' from Ine WawoRuntu. In September she went with other members of the Stichting Hibiscus to Indonesia.
This photo is taken at Imogiri. Imogiri is a royal graveyard complex in Yogyakarta, in south-central Java, Indonesia, as well as a modern village located near the graveyard in Bantul regency. It is the final resting place of the rulers of Mataram, the 'Soesoehoenans' of Soerakarta, the sultans of Jogjakarta other Javanese noblemen. The name is from Sanskrit and means 'snow mountain' or 'Himalajah'.

The most important graves are from Sultan Agung (the first Sultan of Mataram, later divided in Yogyakarta and Surakarta) and Hamengkubuwono IX. The last ruler laid to rest at Imogiri is Soesoehoenan Pakoeboewono XII of Surakarta in 2004.

The lovely ladies in the picture are wearing 'dodot', traditional Javanese clothing.
Thank you for sharing this wonderful 'Batik Statement' with us!

Got inspired? Get your Batik on! Make a picture of yourself wearing your favorite Batik and send it to me by email or post it on my Facebook wall. For inspiration see the previous 'Batik Statements' (tip: sunny, nice locations, lots of colours and good memories).
On 24 november during the WinterFashionFair at Taman Indonesia I will make during a Batik Fashion Photo-shoot 'Batik Statements' of the visitors in the park. So bring your favorite Batik(clothing) with you! Also an exhibition is made of the 'Batik Statements' with Batiks. For more information, in Dutch, see 'Een reis naar Batik in dierenpark Taman Indonesia' .