by Sabine Bolk
translated by Yvonne Bolk (thank you so much!) 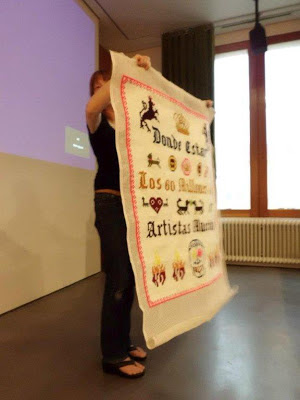 Cécile, how long have you been active as an artist?

I have been active for exactly 20 years, because I graduated from St. Joost art academy in Breda in 1992. After that I attended the Jan van Eyck academy in Maastricht. I travelled for a number of years and was able to concentrate on being an artist fulltime after that. Since 1996 I have been fulltime at work in my studio.

Have you always known you wanted to be an artist?

No, although I always enjoyed drawing and things like that. What attracted me most was noticing that, when someone was working on something with utmost concentration, like my father or my mother, they were so relaxed and carefree. I actually liked them best like that. I think it inspired me to create something.

Is it because it gives a kind of relaxation?

Yes, having to be concentrated, a bit closed off, but bringing out the best of yourself as well. At least that is my vision. When you are making art, you will not start an argument with your neighbour. It evokes harmony.

Is that why you choose labour intensive, detailed techniques in your work?

Yes, I do think so. I enjoy spending a long time on my work, because you are building something. You need more concentration, it is more layered. I see it like building a relationship.

I attended your lecture at the Breda’s Museum (during Café Lumière on 24 august). You told about your trip to South America. Why did you go there?

As I indicated during my lecture, I had been interested in Indians for a long time. Ever since I was young I had a fascination for everything to do with South America. I don’t really know exactly why. I have an explanation, but whether it is THE explanation I don’t know. At home we had an album with Portuguese and Spanish texts and songs. I thought it was fantastic. For a child the world is quite cruel and not always fun. The album allowed me to dream away. It became the ultimate exotic area. I was able to project everything on it.

Did you miss anything in Dutch culture?

Warmth, because the people are cold or the climate?

Especially the first, because people are cold. I wanted to be somewhere else. It was a form of escapism. I also didn’t like the Dutch language, let alone the dialect spoken around me. I immediately loved the language on the album. I thought: I have to go there.

Is this feeling specific because of where you grew up?

It had mostly to do with my small world, not as much the place I grew up. Although I must say that when I was older, the Achterhoek was very suffocating. You can’t stand out. You have to be average. The attitude is down to earth and basic. You shouldn’t value beauty much, which I detested of course.

Let’s go back to South America for a while. Is this trip still influencing your work? You indicated you travelled a lot, what were you looking for?

I am always looking for inspiration and I am always very curious about people. When you are abroad you have a totally different view. You look at people differently. Nobody knows me, so I can be a spectator, even more so then here. People know me here, I have a kind of roll here, a position, while when I am travelling I am totally anonymous.
I focus mainly on people. I let their stories inspire me. I prefer to go into peoples homes. By the way, I am always looking for and I am always interested in people living at the bottom of society. It is their stories I want to hear. That is what I want to relate to. 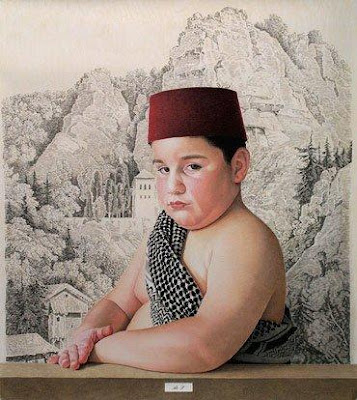 I understand that your portraits are mostly of immigrants, is that because of it?

I feel like an immigrant myself actually. I came to the Achterhoek from North-Holland as a kind of import. I always felt like an outsider, I didn’t speak the dialect and didn’t understand it. But apart from that I would probably have felt like an immigrant always. There is something inside me that hardly ever gives me the feeling of being part of a larger group. And I probably don’t want to be. At the same time, I am fascinated by those groups. Those Indians were so captivating, because I could identify with them. They were damaged and trampled upon. I wanted, partly because of my upbringing in my childhood, to be connected to people who struggle. I wanted to do something for these people. I wanted to make something for them.

In the history of art only important people had their portrait done. That makes it interesting for me to portrait people that are not important at all in the eyes of society. Therefore I want to portrait them literally really big. Because they are treated with disdain, I put them on a pedestal.
I always travel to areas where people are not well off. I want to connect to those people. People who are doing great don’t do it for me.

Do you think also artists being seen in our society as immigrants?

They are in fact, I think. We find ourselves in a marginal position. Because I choose to be an artist, I feel responsible. Because I choose this position I find it important to do something with it. Of course I get the opportunity to do this in this country. If I had lived in Kenya, I would never have been able to apply myself to my art for 20 years. I would have been a mother of 12 children.
I don’t think that we, artists, have a very good position in the Netherlands, but compared to the rest of the world, we are reasonably well off.

Is there a story that you encountered often with the people that inspired you, something that connects them besides the fact that they live at the bottom of society?

What always connects them is a sense of humour and vitality. That is often hard to find here. They live outside more often, are more social, more sharing. Here, everyone has his own little castle with a wall around it.
Maybe solidarity is what I am always looking for. Another notion nobody uses anymore. It is what I love about developing countries, people share and are involved.

On another subject, Frida Kahlo, we talked about her before. Would you have made her portrait and what is so special about her for you?

Yes, absolutely! Her talent and bravery to be personal, that is what I found most fascinating about Frida Kahlo in the past. The last few years I find her assertiveness really interesting. I am not only speaking about her battle against her disease, but her fight for the ‘indigenas’. I am realising more and more that those two thing go hand in hand. The moment you dare to be personal, you can start to be assertive and visa versa. At least that happened to me. Now that I allow personal aspects into my work, this comes with a kind of assertiveness. So two things, personal and assertive, applying yourself to something bigger than your own life.

This is a fairly new aspect in my work. This battle exposes itself differently for everyone. For you it would become visible or tangible differently from me, fortunately so, because that makes our work different. You also need a number of setbacks in your life in order to feel the anger you need to create. In the past I think I was afraid of that anger, now I embrace it. Now I think, there is such power in it, I can use it. I believe there has to be a necessity to make art. 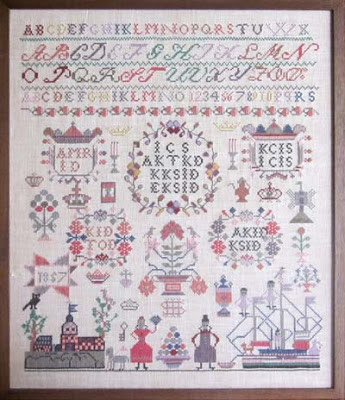 We mentioned the new direction of your work. In your new work you refer to samplers.

I grew up with samplers. My sisters embroidered, I watched for hours. So relaxing. I like the fact that you can put all sorts of things into them. Everyone make their own personal sampler, even though there were rules and regulations within the form. It was of course within a frame. Still the sampler made by my one sister was different from the sampler made by my other sister.

I use a traditional, typical feminine medium with which I refer to history, but I do something totally different. I didn’t want to use it like all those tens of thousands of women in the Netherlands have used it, I turned it into a protest. That is, of course, not the intention at all. You are supposed to show how content and happy you are with your life. A sampler was made in preparation of marriage (more about Samplers in my blogpost 'Sampler vs. Tampan').

After making the switch from oil to pastels, I stopped making self portraits. I wanted to show the other. It also had to do with the fact that I became a mother. I literally had no more time to look at myself. I was only busy with the other and found it totally implausible to make self-portraits anymore. In pastels I only made portraits of immigrants, right up to the start of the crisis. We as artists have found things getting worse. Also the way we were portrait in the media. At the start of the interview I said I see myself as an immigrant. At certain stages you feel it stronger than at others. I felt strongly as an immagraint again. This is what it must feel like to be an immigrant, to be kicked out. Go do it yourself, we are not helping you anymore. No protection, no welcome.

That is how I came back to a more personal subject. I really wanted to be saved myself. Nobody saved me of course, that’s life!(laughing) 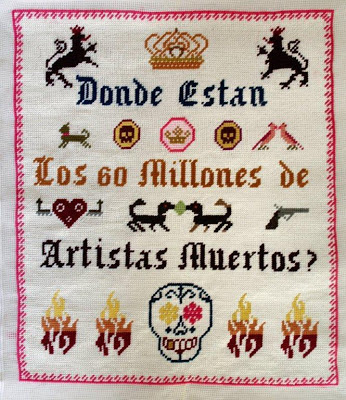 More about Cécile Verwaaijen on her website www.cecileverwaaijen.nl. In 2014 her work will be shown in an exhibition at the Noordbrabants Museum in Den Bosch. Her work is in the collection of the Breda's Museum and is often on display there.