Wednesday I visited the exhibition Hollandaise at SMBA in Amsterdam. I wrote about in my previous post 'You Make Me Wanna'. It's a really nice exhibition, so if you can try to visit before the 7th of January! 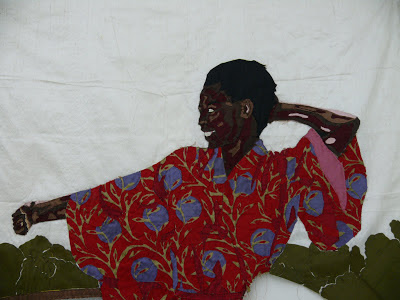 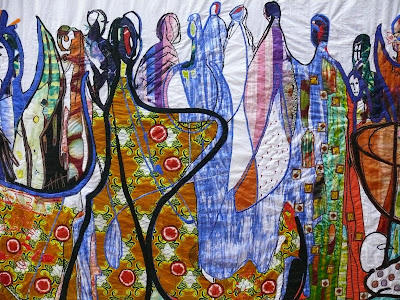 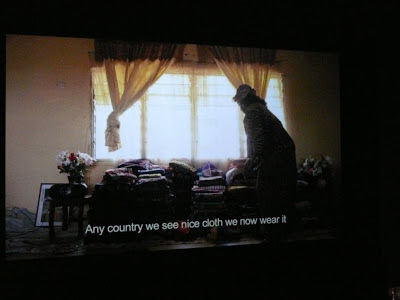 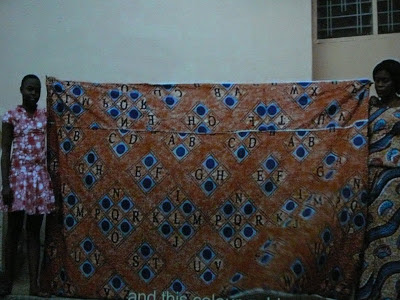 I really fell in love with the videoprojection by Godfried Donkor. A two-channel videoprojection shows on one side a women telling about her cloth collection, on the other a young women and girl showing the cloths she is telling about. Of every cloth she tells what it's worth (not in money, but in status) and it's message (what the symbols mean). I watched it twice and I could watch in a million times more.
It's fun recognizing the cloths, learning more about them.

"Using images from mass media, Godfried Donkor plays with the dominant meanings presented in the iconography of mass communication and questions the implications of stereotypes that are presented in newspapers, magazines, advertisements and other printed materials. By combining the imagery and design of popular media with images of black athletes or indigenous people in his paintings, prints and collages, he interrogates not only the mode of representation,but also reveals the power of these media institutions by indicating that the subjects represented have little voice in their own representation. This attitude also includes playful and serious commentary on Western art history, for instance when he creates paintings that represent a black Madonna with child, probably one of the most painted themes in Christian iconography.
For The Currency of Ntoma (fabric) Godfried Donkor entered the domestic environment of his parents and friends of his mother in Kumasi, Ghana, to look at the exceptional and valuable function that textiles have for women in West African countries. Growing up in Ghana, he saw a lot of women who collected textiles, Dutch Wax, batik, kente cloth and lace, and every now and then exchanged these fabrics with each other. Outside the control of their husbands, and sometimes even without their partner’s knowledge, Ghanaian women collect fabrics as a form of savings account. For his film Donkor visited these women, to understand and document this common practice that connects the financial value of the fabrics with the prestige of the owner of the collection of textiles.
His exploration in the fabric collections of Ghanaian women has links with colonial history as well, since Hollandaise and batik are import products that have been bought and sold in Ghana since colonial times. But the position and representation of black women in this film shows that they have appropriated the fabrics to their own advantage. These women emerge as independent and ingenious. They take control over their own lives by creating a collection of valuable cloth. This life-long process of accumulation demonstrates that these women are assertive individuals. Instead of being objects of trade, they trade in objects."
- From SMBA Newsletter N˚130

This text also represents my problem with this exhibition. The images are strong, but the undertone is very negative.
Buying a not african product is compared with still being suppressed.
Textiles have always been a popular object for trade and were collected long before Dutch, French, Portuguese or English colonists set foot in Africa.
In the Newsletter some possible reasons for Vlisco's popularity are mentioned, but only the ones with a colonial twist.
One of the most popular textiles of trade is the Indian chintz. Before we and the Portuguese brought it by boat around 1600, as traders, chintz arrived earlier on the Gold Coast by inland trading routes.

Batik's origin most likely comes from chintz. Their layout has many similarities.
In the Netherlands chintz were very in vogue in the 17th and 18th century. We used them in our traditional costumes and for interior design. Soon in Europe chintz were copied and printed mechanically.
Later Vlisco developed a method to make Javanese Batiks.
The printed Batiks, meant for the Javanese market, were better received in West-Africa. Were Javanese didn't like the printed hard colors and fake irregularities, the West Africans saw the similarities with the chintz and liked the strong, contrasting colours. 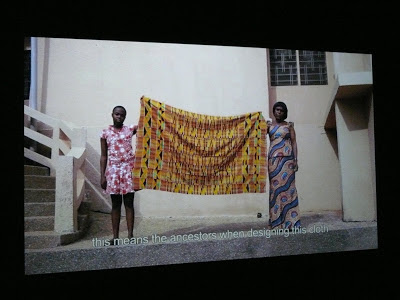 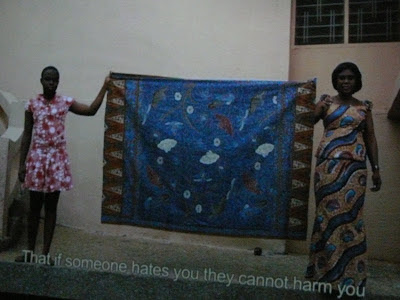 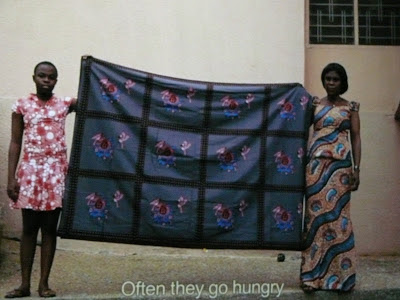 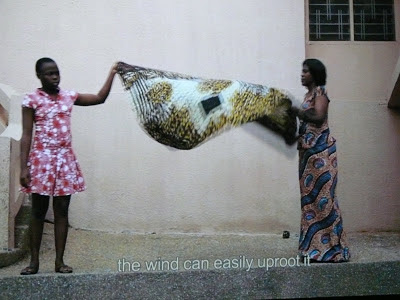 
The cloth collection of the lady shown in the video consist of Java Print, Wax Block Print and Kente.
I was really surprised that my first Vlisco, picked out by my mother, express the proverb: 'Only a good mother knows what her childeren will eat'.
In the video projection 'La Javanaise' another way of expressing your feelings with textiles is mentioned. Cloths with French and English rulers were very popular in Africa. Not to support them, but you could literarly sit on their face or were the cloth upside down.
So in the future let the textiles express the protest, not the explanatory text.


'Hollandaise' is open till 6 January at the SMBA in Amsterdam, more information on www.smba.nl.