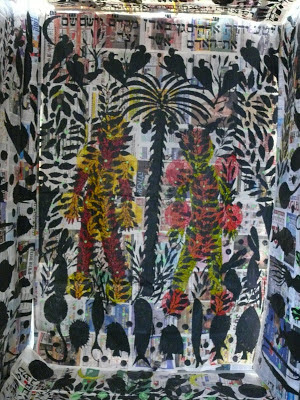 Friday me and Emmy Dijkstra went to see the exhibition 'Die avond groeide er een bos in de kamer' in the Wetering Galerie in Amsterdam. It's till 19 januari, try to see it! It's a really great collabaration between Titia Frieling and Gijs Frieling, mother and son.

We really wanted to see this work because of the stricking title: 'That night a forest grew in the room'. Like always synchronicity wasn't far away. Emmy was using a book for a workshop, it started with the same sentence. It turned out that this book inspired the Frieling's to make this exhibition. The same way 'Zomerboek' inspired us. We brought our work into a forest, the Frieling's made a forest inside a gallery.

Another exhibition we had to see, was the exhibition 'The world according to Eli Content' at Galerie Onrust. Emmy's mother saw Eli Content's paper house on TV and immediately saw the strong similarities with our paper hut (see YouTube movie 'Papieren hut'). Unfortunately we couldn't find a date on which we both had time. I had to visit Amsterdam for another exhibition (See blogpost 'Hollandaise at SMBA'), so I combined it and promised Emmy a detailed report!

In the mid-seventies Eli Content (Vevey, Switzerland, 1943) made his debut with extremely severe-looking, minimalistic paintings. At he same time he also made much looser cut outs with Matisse-like ornaments. This freedom he has always granted himself. He cannot and will not deprive himself nor the beholder.
In a letter dated October 12th 2012 he writes: “The world that I want to show is more than just one uniform thing –as is usual in the art world- my world is manifold and is not restricted by just one style." * 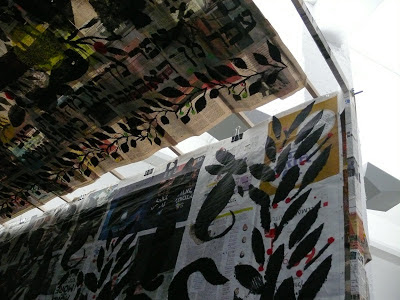 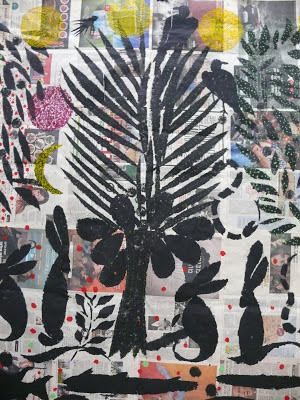 His whole life he has been fascinated by the account of the Creation as described in the Bible Book of Genesis. “Whether this is true or not is unimportant to me. It is true because I think it is beautiful. It tells us about the animals that were there before us, about the trees, plants and the creation of man.” This narration is crucial in the monumental window piece (The Creation of Man – Male and Female, 2012) and the little house (Paradise, 2012), both erected from painted over, fragile old newspapers. In both works he also goes back to one of his older themes, his fascination that the letters in the alphabet can basically contain all knowledge and keep this alive. Together with birds, fishes, plants, trees and human figures the letters of the Hebrew alphabet crowd his installation in Galerie Onrust. He celebrates the freedom to give his art any form he likes, free from a fixed style or any dogmatism in high-spirited paintings, drawings, artists books and installations. A selection of recent works can be seen under the title It’s not a house...it’s a home. Or the world according to Eli Content.* 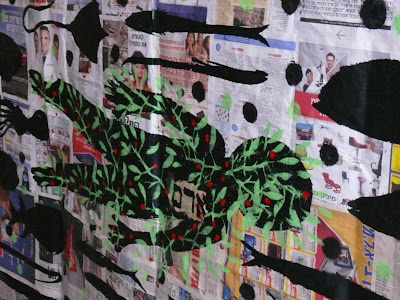 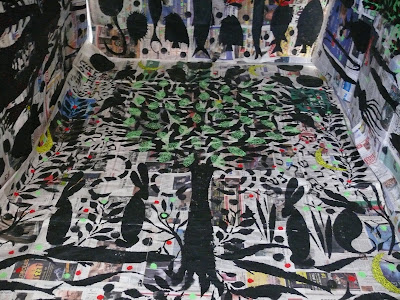 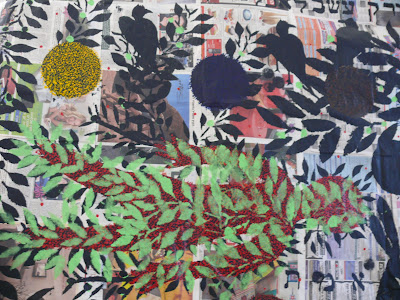 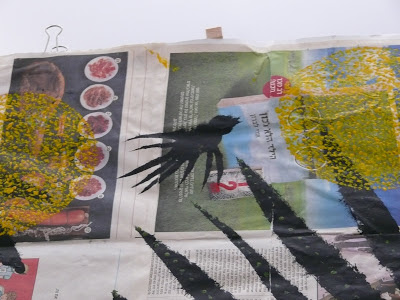 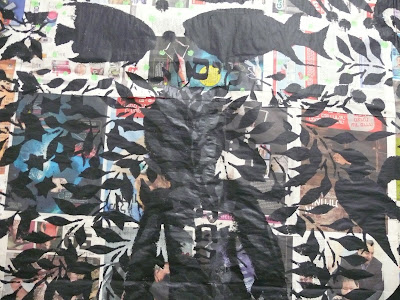 I tried to absorb the paper house with my eyes. The details were so fascinating and also familiar. I wanted to store the feeling I got when I looked at this work, so I could close my eyes now and still see it.
He uses stencils. The clear, quick use of his brush makes his work rough, masculine even. Although the images aren't typically male or female.
If I was very careful, I was allowed to enter the paper house. Oh it looked really fragile, due to the faded old newspapers he used for this installation. Yet when you stand in it, it really feels like a little house.

The installation was specially made for Galerie Onrust and therefor temporary. Enjoy the pictures and when you can try to see Eli Content's work live! 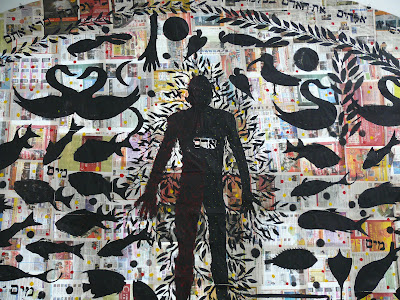 'The Creation of Man – Male and Female' by Eli Content