Go back and get it 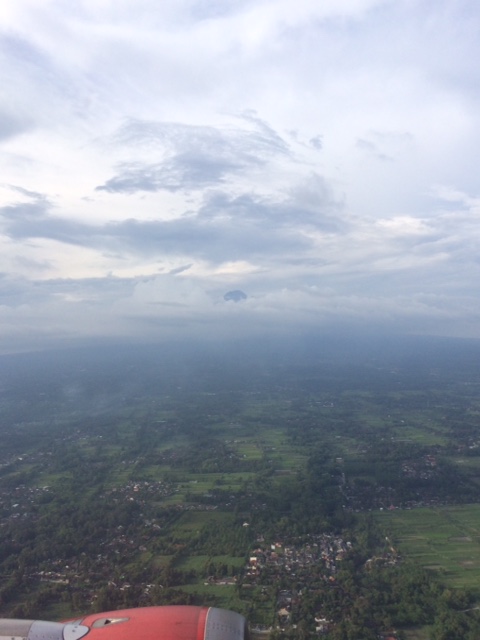 Returning back to Yogya on Saturday 29 October was also the start of my last month on Java. I can't believe how fast the two months before passed. At the same time I can't believe how much I have done in these two months.
Because the first two months of my journey almost ended, I needed to extend my visa for one more month. So three days were reserved for that, but happy to add 30 more days to my adventure.
My stay in Yogya made it possible to have some nice meets. 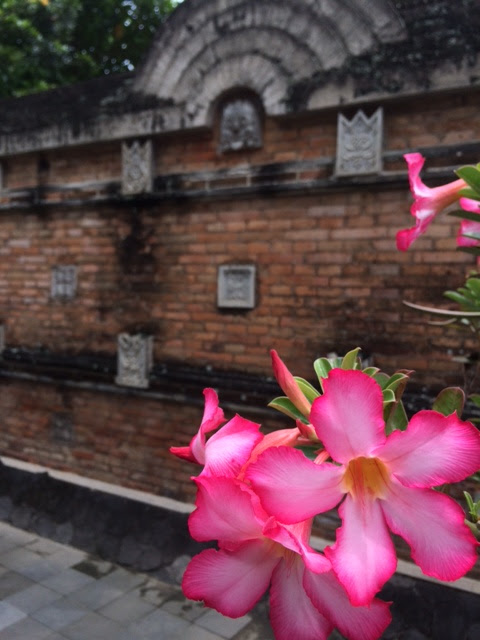 Ine, a dear friend from the Netherlands, happened to be on Java. She invited me for a touristic day in Yogyakarta on Tuesday the 1st of November.
I didn't had time for that before, so it was great to do some classic things.
She invited me to Kota Gede. Kota Gede was where the first capital of Mataram Sultanate was established in the 16th century. By the mid-18th century, Mataram lost both power and territory to the Dutch East India Company. The neighborhood of Kota Gede nowadays includes the remains of the palace, the royal cemetery and the royal mosque. A labyrinth of entrances leads towards the royal cemetery and the bathing place. Along the way you see beautiful ornaments in the walls. I was looking for motifs found in Batik, but these motifs made me think of Adinkra symbols from Ghana instead. Looking them up now, they aren't actually similar, maybe in the abstract line, but not in design. Especially the one of the birds facing each other...In my memory there is a symbol like that, but I can only find the one with the bird turning her head to put an egg on her back: 'Sankofa'**. It symbolizes taking from the past what is good and bringing it into the present in order to make positive progress through the benevolent use of knowledge.
Maybe it was not coincidence. Well probably not. The stay in Yogyakarta was marked by re-visiting and being confronted with the past. Not necessarily mine... 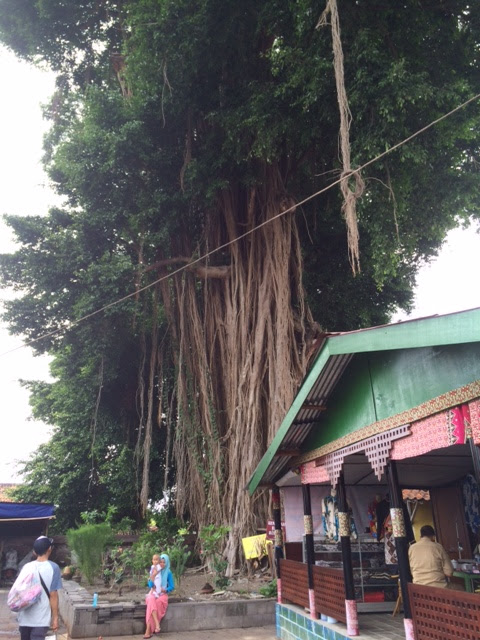 After Kota Gede we headed for the Kraton. I've been there before in 2009 (see post 'Sultan Palace') but only parts of it I recognized. It was much bigger then I remembered. There was a very nice exhibition with photos and Batiks that I liked better then the part you're not allowed to photograph. The photos from, I think, the seventies showed an insight of life in the Kraton. They reminded me of my grandfathers slides. The photos show certain rituals that reminded me of my own work. Some photos were combined with batiks showing which patterns are used for which specific ritual. 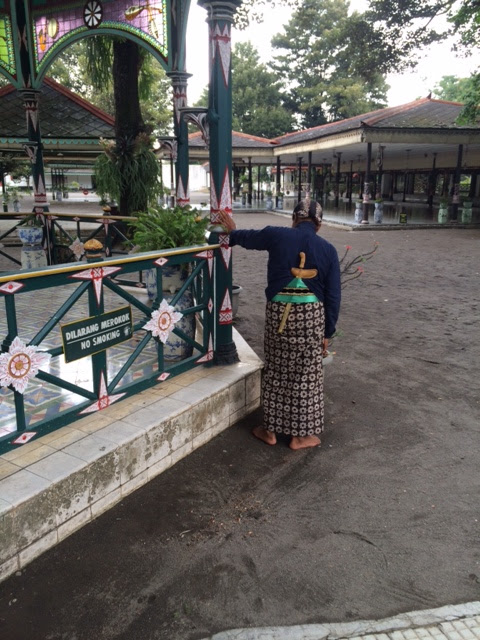 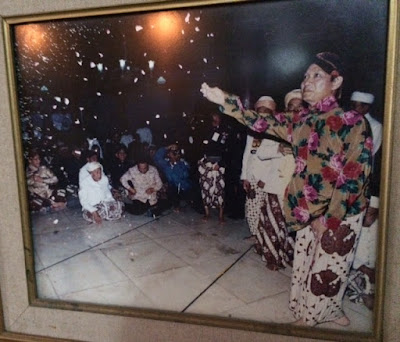 Sultan Hamengku Buwono X at the Big Mosque celebrating Sekaten by spreading udhik-udhik in the form of yellow rice, flowers and coins 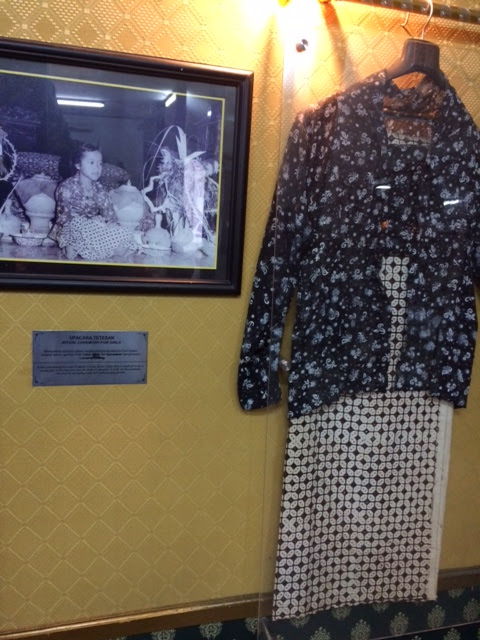 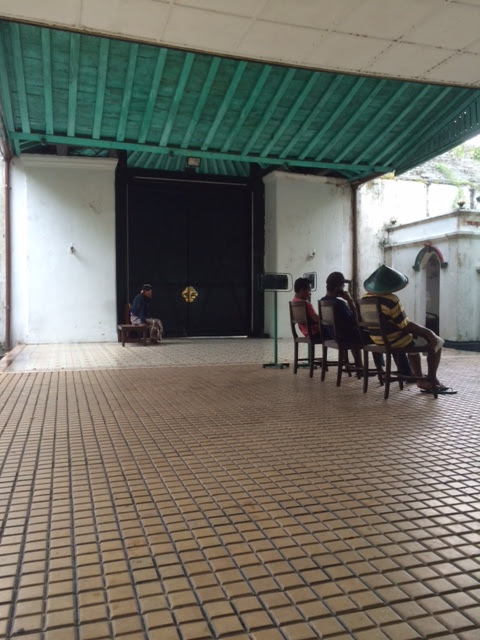 Next stop was Fort Vredenburg. I never been there before and I couldn't recall the correct history, but when we got there I knew why I never been. I don't really like to go to these kind of places. I don't enjoy being there, and well, maybe that's the point.
With dioramas important scenes from Javanese culture are re-told. The begin part I could handle pretty good, the last part not so good. The rooms seemed to get much colder the closer history got to today. The images became more gruesome. With a national song on a loop playing loudly in the last room, I felt already afraid to face every new scene. Arriving at the end of the hallway, I turned the corner and was confronted with a life size scene from the war or as we Dutch would say "de politionele acties'. It was just a flash and I was outside in a second catching my breath and swallowing my tears.
I think for people with a close connection to this part of our shared history, they can maybe better skip the last part of this exhibition, or be aware that it might be very unpleasant. 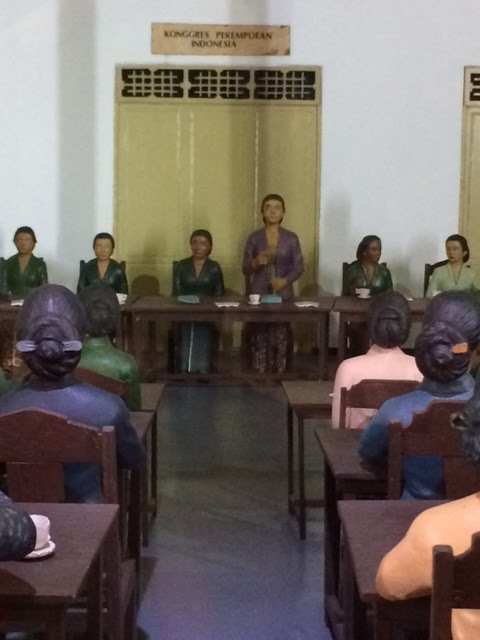 The next day I was going to meet Annegret Haake and Hani Winotosastro again (see post 'Jogja International Batik Biennale'). Annegret, the German Batik lover and researcher, gave a lecture at Balai Besar Kerajinan dan Batik (The Center for Crafts and Batik) about 'Symmetry in traditional Javanese Batik patterns'. I never heard of this center before, but with this journey I'm surprised every time of what I know and of what I never heard of at the same time.
The lecture reminded me of what makes me connect to Batik. It is creating balance without calculation. The more calculated a design is, the less I like it.
After the lecture we headed to Batik Winotosastro in Hani's brilliant egg-yellow Daihatsu. Returning back to Jalan Tirtodipuran brought back many memories of my first journey to Batik. What a difference between the me now and then. I remember sitting trembling, only 3 days after my arrival, trying to make a small Batik at  'Batik Winotosastro'. My second return to this street was a much relaxer one. I met the batikmakers in Jeruk, my friend Barbara was soon going to join me and I felt more confident after my stay in Semarang.
Now two months in my journey, 7 years and one month later, I could just enjoy looking around, listening to Annegret explaining about Winotosastro's legacy and be me.
The Batiks from these workshop are a bit to perfect for my taste. Really, the technique is so good, that it seems impossible to be made by human hands.
After looking around at the workshop, me and Annegret went for lunch. We ended up at Tante Lies were I shared many nice talks and ice tea's with Denny & Barbara in 2009.
Nice to return to this starting point and I'm looking forward to meet Annegret in the near future nearer to my home to talk some more Batik! 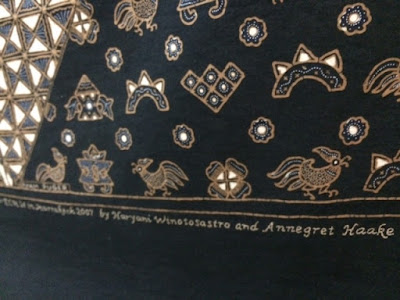 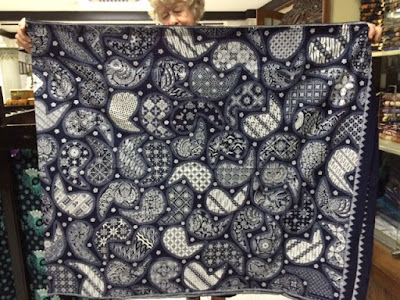 On Tuesday 1 November the royal cemetery at Kota Gede was closed, so me and Barbara returned on Sunday 6 November to go inside. Just like at Imogiri you have to be dressed in Batik for this. It was very busy when we arrived, but we were alone when we got inside. I waited outside to give Barbara her space, enjoying the serene atmosphere of the place. Aldo Kota Gede is a very busy area, I heard only birds singing. The guard who accompanied us started sharing stories. New visitors arrived so we moved from sitting at the entrance to sitting behind a tomb. It was an interesting display and Barbara laughed when she came outside. 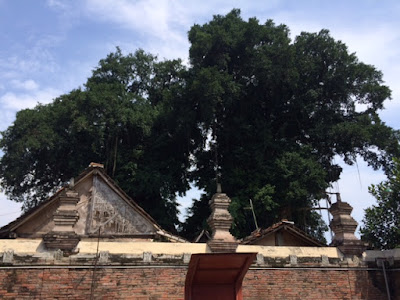 My stay in Yogya ended with Trump being elected. I picked up my passport the day before and was preparing for my journey to Madura from where I'm writing this post now. I followed the election step by step, thanks to the timezone I'm in, and it felt surreal seeing the number of votes for Trump growing and growing. Not that I would have been been happy if Hillary was elected. But still...

"Se wo were fi na wosankofa a yenkyi" **
We must go back to our roots in order to move forward. That is, we should reach back and gather the best of what our past has to teach us, so that we can achieve our full potential as we move forward. Whatever we have lost, forgotten, forgone or been stripped of, can be reclaimed, revived, preserved and perpetuated. What the future will bring, no one knows. But we know from our past which future we don't want. Still this man got elected... so... now what?