The contrast coming from Jeruk to Jakarta couldn't have been bigger. And now back in Sleman both seem like a dream I had. Flying from Semarang to Jakarta felt already extravaganza, but I hadn't seen the Jakarta FashionWeek yet. I had no idea what to expect. I've been to fashion shows before, but never a fashion week.
The first day, on Saturday 22 October, I went early to get my press-pass and to register. It was exciting to finally be at this event and seeing brands I wrote about on my blog these last 7 years on the catwalk (see links at the end of this post)

The fashion week is held at Senayan City, one of 60 malls in Jakarta! Inside the mall is a small catwalk used mostly for the press events. Outside, on what is normally a road, is the fashion tent with a very long catwalk, a press conference space and place for the visitors to take selfies or be photographed. 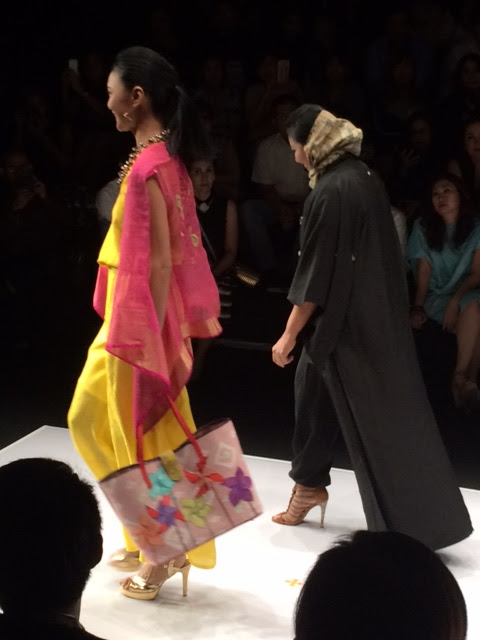 Novita Yunus of Batik Chic on the catwalk

After a press-conference in Bahasa Indonesia and receiving my first goodie bag, it was time for the opening show. A long parade of almost all designers who would show their collection during this week passed by. When Novita Yunus of Batik Chic walked by with her muze, I wanted to scream. I saw her later and she dragged me to the famous fashion week logo wall to pose with me. This woman is all glamour and when I ever grow up, this is my goal look! 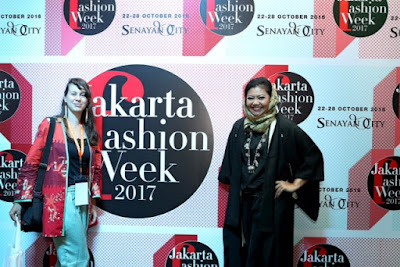 Me and Novita Yunus

The first day was one of being very disappointed in a brand that is called Bateeq, but Batik is hard to find in this brand, and at the same day being very very surprised by two Indonesian designers.
First BYO. This young Indonesian designer was already the talk of the day. Everyone said I had to see his show. He is known for his bags & clutches that are very popular at the moment in Jakarta. In the press release is mentioned that he is heavily influenced by fantasy and science fiction and that this collection is inspired by Ridley Scott's Alien movie. Wauw, I was ready for some things, but this was very different. The material used for his designs is made of a kind of plastic that clicks together. The
models looked liked they just landed their spaceship and rocked their handbags perfectly. Unfortunately not all designs clicked as well on the skinny models, leaving some showing their underpants. Overall an interesting new look on fashion. I'm only wondering how sustainable his designs are, but thats maybe something for the next collection? 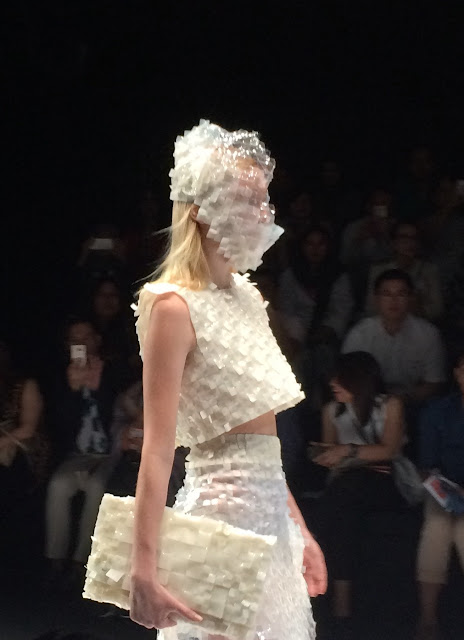 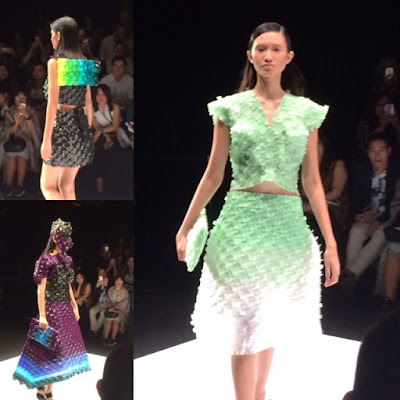 Second, Jenahara Black Label. During the press conference I was so exited that a collection was based on one of my favourite singers and people on this planet, Patti Smith. And not only that: "I want to give a new way of thinking about modest fashion for muslim woman". Wauw, muslim wear and the Queen of Punk, what a combination, and yet it worked!
The models entered the catwalk on a Patti Smith cover of 'Smells Like Teen Spirit'. The dark gloomy song gave the outfits an even edgier look. A transformation of Patti's signature look on her album 'Horses' into suits and dresses. Grey, white and leather outfits with a loose fit, Patti wouldn't wear it differently, decorated with chains and parts of lyrics like "Because the night". 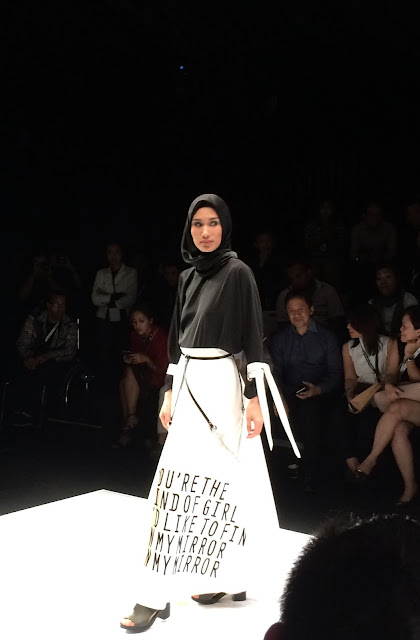 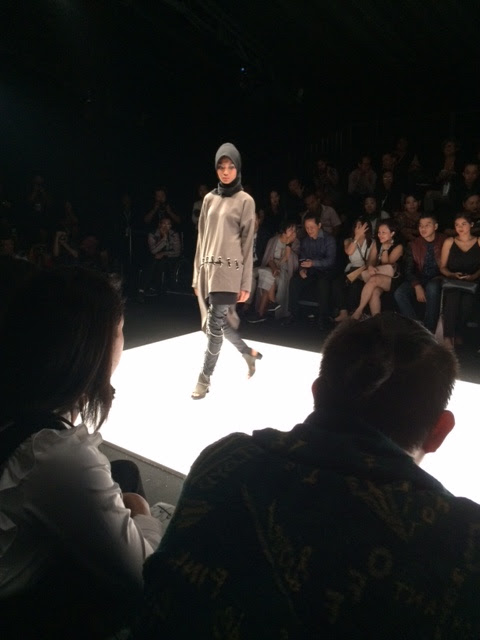 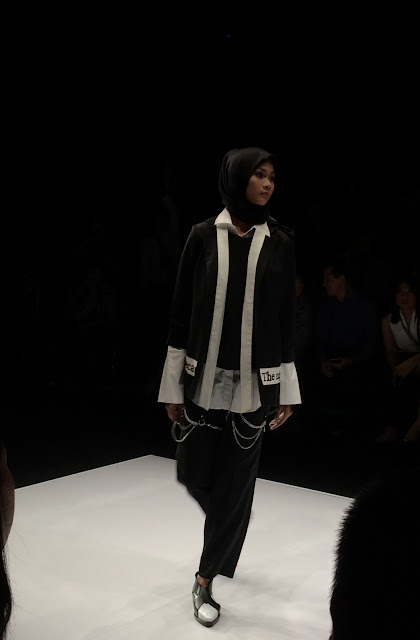 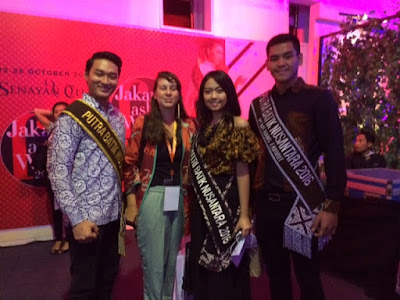 Me and the Ambassadors of Batik

Leaving the fashion week, I bumped into the Ambassadors of Batik. Never heard of them before, but nice to spot pretty people representing Batik. Making a picture together and sharing contact information, I was happy to find out they had a talkshow the next day in the exhibition 'The Spectrum of Batik'.
The exhibition was held to celebrate the 30th anniversary of IPMI (in English Indonesian Fashion Designer Council) and Batik Day 2016.
The talkshow by Batik Putri Putra Batik Nusantara in Bahasa, with some effort by the host to get some English answers, was about how Batik could be fashionable for a younger generation. They explained how the Ambassadors got selected through a kind of talent-show where only the top-3 really has to know Batik.
But I'm happy with any kind of support to promote Batik, so happy I could join in. 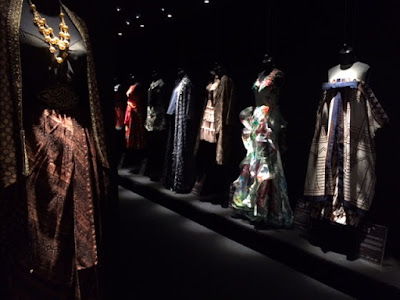 Exhibition 'The Spectrum of Batik' at Senayan City

On the second day, 23 October, these were my two favorite shows.

First Iwet Ramadhan, better know as the designer for TIKprive. His fashion show was a tribute to women who have or had breast cancer. His unusual collaboration (for a fashion week) with the Cancer Foundation (it was also Breast Cancer Awareness Month) was actually a really great contribution. He could have used more Batik, but with a charity show like this, who's complaining. 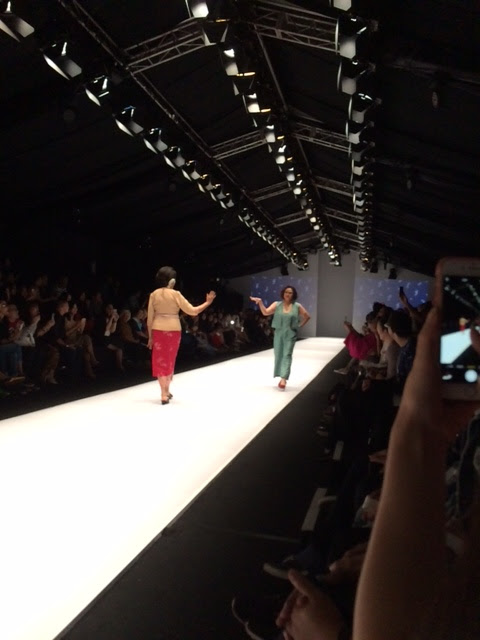 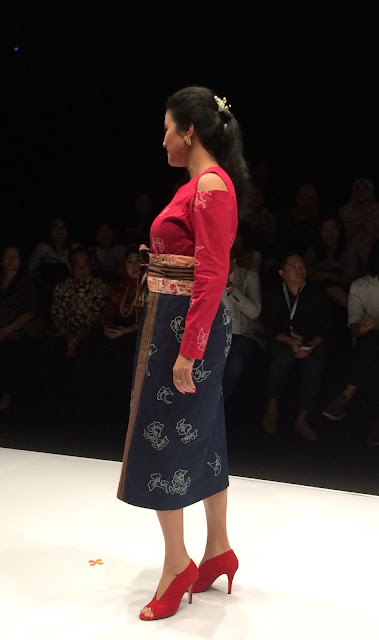 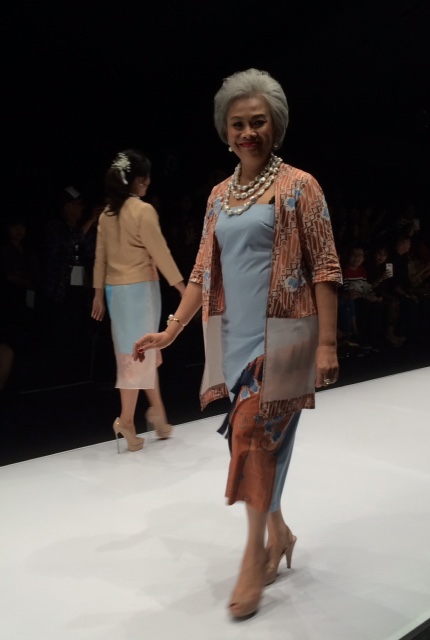 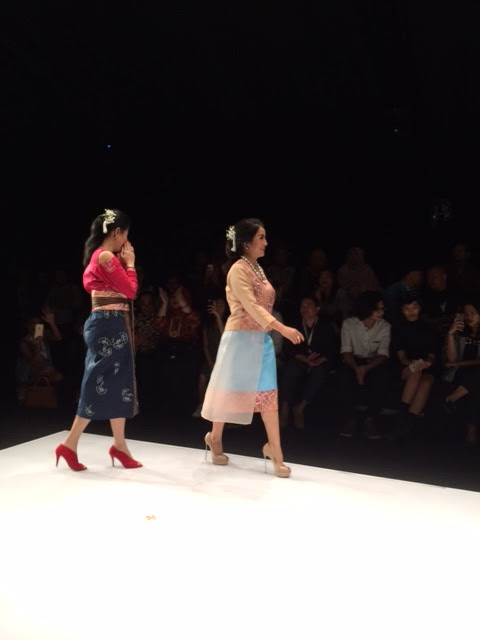 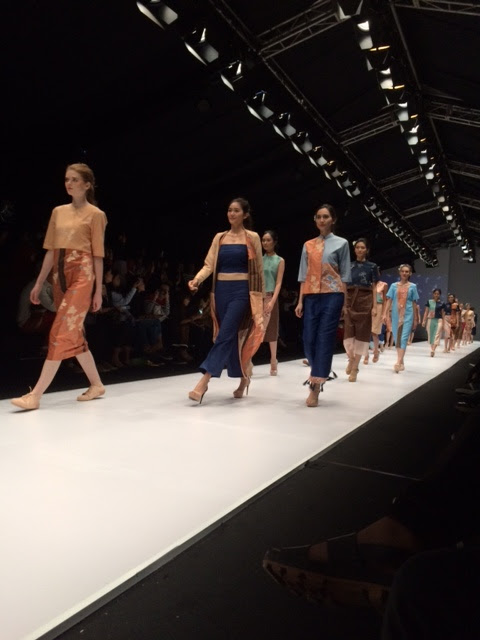 Second show that I really loved that day was 'Cindramata' by Itang Yunasz. I was already told by some of my fellow media fashionista's, I had to see his show(s). I know it is a ready to wear collection, but what a collection. I loved the colours, the patterns, the textiles and the platform slippers. The ending with the models forming a colour coded line was spectacular! 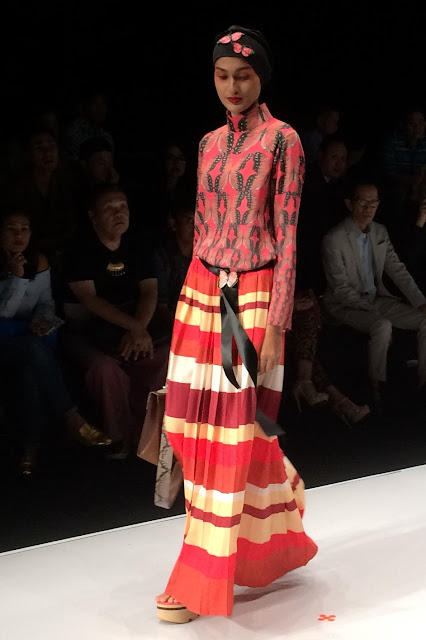 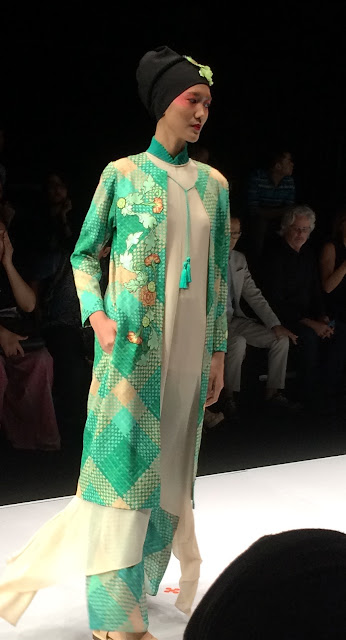 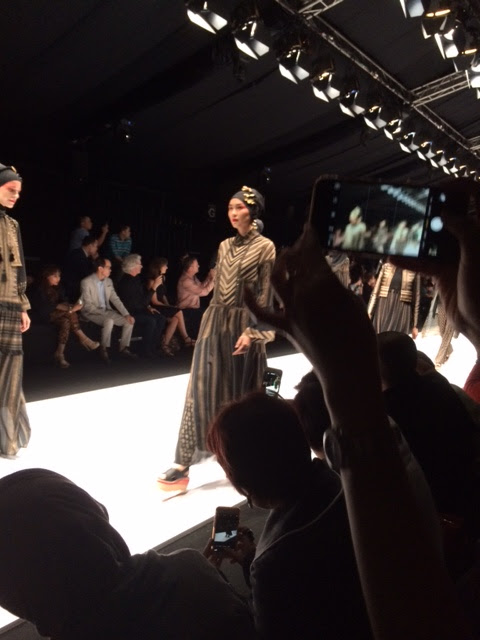 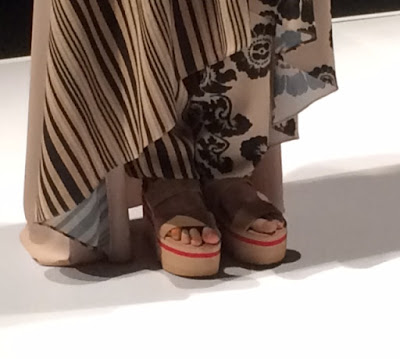 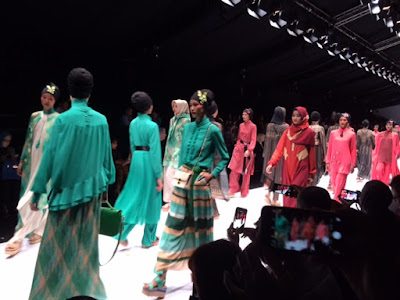 For more fashion before my next Jakarta FashionWeek post, see the links below:

'Once upon a time' (about Anne Avantie)

'As Far As The Eye Can See' (about Sejauh Mata Memandang)