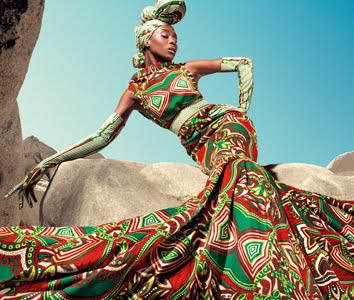 For this post I would like to continue with the history of Vlisco and their designer Johan Jacobs. Leaving a mark is an important part of our history. We like to show off what we own and have many ways of doing so. Two nice ways of showing what we own are represented in the story of Vlisco: Wax Prints & Ex Libris by Johan Jacobs. 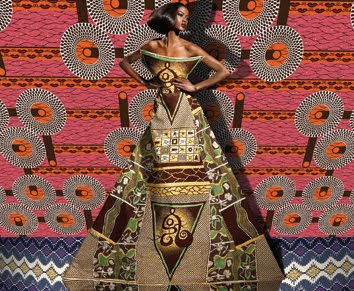 Since 1946 the fabrics of Vlisco are a part of the African culture. The import to the Dutch East Indies stopped and the market for Vlisco fabrics shifted to West Africa. There are different theories why the Vlisco Wax Print become so popular in Africa.*
The batiks could have been introduced in West Africa by traders. On lists of the VOC the cargo in the 17th century already included batiks.
The popularity can also be explained by something that occurred in the middle of the 19th century. With the import of Javanese batiks, the trade of Indian Chintz was so disrupted that batiks where forbidden for a period of time in West Africa. Another theory involves Swiss missionaries.
The most used theory is that recruited soldiers from the Gold Coast for the KNIL introduced batik in West Africa. Between 1831 and 1872 3.000 soldiers were recruited. After their duty they returned to Africa bringing with them Indonesian Batiks.
Despite the different theories it is not clear if the introduction of Indonesian batiks in West Africa started the popularity of Vlisco Wax Prints.

West Africa had its own production of textiles. Through caravan routes import and export was done with The North of Africa, the Middle East and Asia. The trading peaked between the Middle Ages and the 19th century. Because traveling was expensive mostly luxurious goods where transported. Silks from China, woven cloths from Morocco and printed cotton from India. 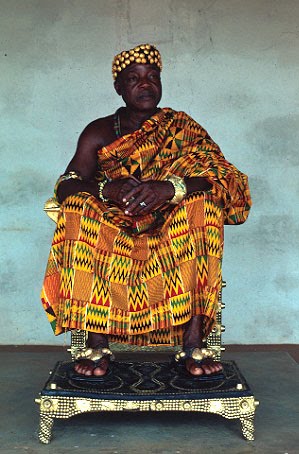 Owning a big collection of good quality textiles gave you a high social status in the 17th century on the Gold Coast. Also it provided a way of expressing oneself.
Similar to the Batik motifs that are meant for royal family of Kraton in Solo, Yogyakarta and Surabaya, a special woven cloth was worn last quarter of the 17th century by rulers in Ashanti (inland behind the Gold Coast). The patterns on the so called 'kentecloth' were given a symbolic meaning. Most likely traders started giving imported textiles names so the patterns would have a 'royal' status.

The Vlisco wax prints still represent luxury and wealth in Africa. By wearing Vlisco fabrics you show that you can spend money. Since 1963 the text 'real Dutch wax' is added to the fabric, on Sunday going to church women will show off this text clearly to show they are wearing real Vlisco textiles.** 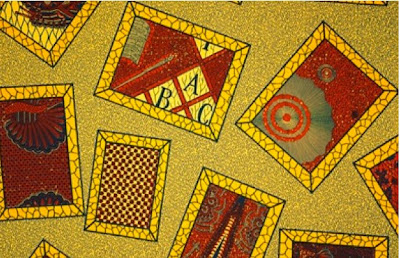 The more fabrics a woman owns, the higher her social status is. There is even a special Vlisco design to show of how many pieces you own.  'Zoba zoba', meaning "pieces", contains the most popular and famous designs on one cloth. By wearing a 'Zoba zoba' you express that you own all these Vlisco's.
The rule with collecting fabrics is the older the fabric, the more value it has. When a old lady passes, her relatives show her fabric collection and share stories on when she received or wore each piece. The collection not only represent her status, but also shows her character.


In 1900 Johan Jacobs started his position as chief of the drawing room at Vlisco. Because of his function he came in touch with more higher positioned staff. And also outside of the Textilefactory he came in contact with in important group of the Helmonds society like lawyers, doctors, scientist and other educated people.***
In those circles reading was considered an intellectual activity and owning books was cherished.
The owners of a big collection of books, marked every book of his library with an Ex Libris, showing his pride.


"Ex Libris (also called bookplate) is a small printed label, placed on the inside of the frontcover of a book, bearing its owners name and a sign of personal identification. Derived from Latin the word means ‘from the books of’ and originated out of the need to indentify the books ownership. An exlibris represents a miniature art developed to adorn books and a individualized way for the book’s owner to be identified. Bookplates typically bear a name, motto, device, coat-of-arms, crest, badge, or any motif that relates to the owner of the book, or is requested by him from the artist or designer. The name of the owner usually follows an inscription such as "from the books of . . . " or "from the library of . . . ", or in Latin, ex libris ....Bookplates are important evidence for the provenance of books."
- From Wikipedia 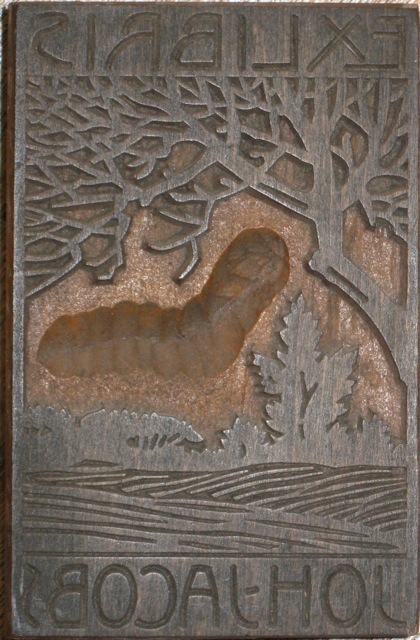 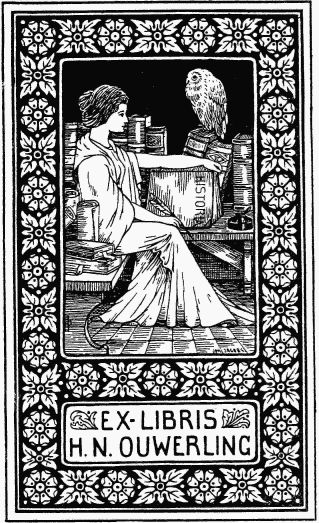 It became very populair beginning of the 20th century to mark your library with an Ex Libris. People also used Ex Libris to improve their social status.
Johan Jacobs started designing Ex Libris in 1907. The first one was for lawyer Kees Prinzen. The discipline was new for Jacobs and for his first assignment the influence by Arts and Crafts artist Walter Crane is very big.
After this design his Ex Libris became more authentic. With a Jugendstil decoration and his love for nature he made the Ex Libris really into small pieces of art. Using symbols and the occupation of the client to make a personal, yet professional mark to put in their library. 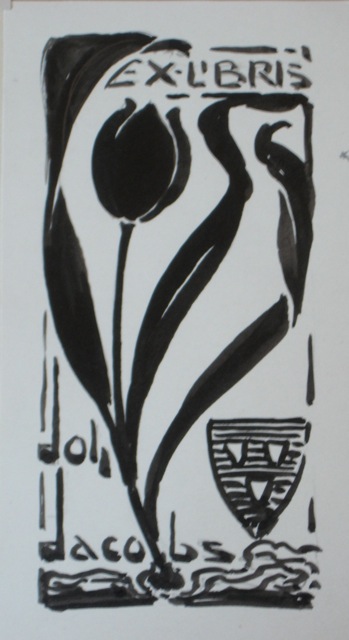